Manildra is a rural service centre surrounded rich agricultural land known for its production of fine wool, wheat, orchards, canola, vineyards, beef cattle and fat lambs. It is recognised as an important rural industrial centre with the largest flour mill in the country (and reputedly in the Southern Hemisphere) and a huge canola oil plant.

Manildra is located 304 km west of Sydney via Bathurst and Orange.

It is believed that Manildra is a Wiradjuri Aboriginal word meaning "winding river".

Art Installations on the Flour Mill Train Wagons
An inspired idea, these images of local people have been painted by the internationally acclaimed photo realist artist, Guido van Helten. His work, huge realistic images of ordinary people on walls and large open spaces, has appeared in places as diverse as Ashfield in Sydney, Jacksonville in Florida, Avdiivka in the Ukraine, Helsinki in Finland, Fort Smith in Arkansas, Mexico, Iceland, Chernobyl in the Ukraine, Belgium, Belarus, Lismore in New South Wales, Brisbane, and, most famously now, the Brim Silos in western Victoria. Be amazed at his work. Check it out at http://www.guidovanhelten.com. In Manildra he wanted to use train wagons - a sensible idea given that the town's biggest industry is the local Flour Mill and trains come and go from the silos all the time. At the time van Helten explained: "When I was approached to do a documentary on my work, I loved the idea of bringing it to a regional town and painting freight carriages instead of buildings. I thought this would be quite interesting ... It's about everyday people. People that represent different areas and the community here." Three times a week the carriages, along with others which are not works of art, travel from Manildra to Bomaderry on the South Coast. There are a total of seven carriages and all feature local people from Manildra.

Manildra Heritage Walk
The best way to experience the history of Manildra is to wander around town reading the 10 very detailed and interesting signs which are located along Keiwa Street, Derowie Street and Cudal Street. There is a map in the Lions Park and eight of the ten places of interest are on Keiwa Street. Of particular interest are the following:

1. Manildra Railway Station
The sign explains: "The coming of the railway, and the building of Manildra station, was the real beginning of the new town of Manildra. On 23 May 1893 the contract for the station building, station masters residence and goods shed was let to Mr T. Spencer. The line from Molong was opened for traffic on 18 December, 1893. The total cost of construction was $9,786 per mile. In 1894 418 tickets were sold, 618 tons of goods sent out, 115 tons brought in, no wool was forwarded from Manildra. There was only one employee."

2. Village of Manildra
The sign explains: "Officially proclaimed 20 March, 1885. The little settlement grew on the eastern side of the Mandagery Creek and consisted of the Coach & Horses Hotel, a store, the Catholic Church, a small hall, a Police Station, a blacksmiths shop, post office, butcher, Presbyterian Church and several houses. Later, due to the siting of the railway line and station, the main town progressed on the western side of the Mandagery Creek."

3. Imperial Hotel, Post Office and Former Barber Shop & Billiard Room
Located at 97-99 Kiewa Street, the former Imperial Hotel dates from 1913. It was a hotel for 20 years - from 1913-1933 - and then was divided into flats. More recently it became the Imperial Guesthouse and Restaurant and has subsequently returned to a private home.

4. Manildra Flour Mill
It is easy to see that the Flour Mill dominates the town and employs nearly 200 locals. What is less well known is that the Manildra Group is a family owned business. In 1952 Jack Honan bought a flour mill in Manildra. Since then it has grown into a hugely successful agribusiness with Dick Honan as the Group Chairman and John Honan as the Manildra Group Managing Director. They are, as far as Manildra town is concerned, good corporate citizens. The townsfolk are proud of the recreation facilities (the local oval is much bigger and better than a small town would normally have) and places like the Amusu Theatre acknowledge the financial support they get from the company. They have now been operating in the town for over 65 years and wear, as a badge of pride, their award as the Family Business of the Year in the 2017 Ernst & Young Entrepreneur of the Year awards.

6. Amusu Theatre
The Amusu Theatre (pronounced 'Amuse You') is reputedly the oldest continuously operating picture theatre in Australia, established as a travelling picture show in 1923, settling at this site permanently in 1936. It has operated continuously since 1936 with original decor, memorabilia and projectors. It is operated by volunteers and still has the original carbon projectors, original seating and floors. It was purchased by the local community in 2003. Located at 17 Derowie Street this Art Deco theatre shows modern movie releases on the third weekend of each month. Saturday at 7.30 pm and Sunday at 1.30 pm. For more information check out https://www.amusutheatre.com. Tel: 0418 452 902.

6a. Amusu Movie Poster Museum
Located next door in Tom's Garage, the Movie Poster Museum is open from 11.00 am - 3.00 pm on Saturdays and Sundays. It is, as the name suggests, an extensive collection of old movie posters some of which can be purchased. The garage was built in 1940 and was one of Cabonne Shire's earliest family run garage businesses. It continued to operate as a garage until the late 1990s. For more information check out https://www.amusutheatre.com. Tel: 0418 452 902.

7. Royal Hotel
The first Royal Hotel was destroyed by fire in 1924. It was rebuilt in 1925 and extensively renovated in 2011 - including the upstairs veranda. Today it is the most impressive building on Keiwa Street with a pleasant, shady beer garden. There is a full and dramatic account of the 1924 fire included on the signage outside. At the time of its destruction the town did not have a fire brigade.

8. Commercial Banking Company of Sydney
Located on the corner of Derowie Street opposite the Royal Hotel, the CBC Bank purchased this land for £1,370 in 1911 and built a bank which cost around £800. It continued to operate until it was closed in 1992.

9. Soldiers Memorial Hall & School of Arts
A total of 43 men who had lived in the Manildra district were killed in the Great War. Cyril Read, who had been the Secretary of the School of Arts, died at Gallipoli in 1915. After the war the School of Arts building was sold and the plan was to build a School of Arts and Soldiers Memorial Hall in honour of those who had served in the war. It was anticipated that the cost would be around £2,600. The land was purchased and the foundation stone was unveiled on Remembrance Day 1925. By 25 April 1926, Anzac Day, the building had been completed and a united church service was held in the hall. The following day the hall was officially opened and a ball was held in the evening.

* Prior to white settlement the Wiradjuri people lived in the area.

* Europeans arrived in the area in the 1840s

* By the 1870s there were people living along Mandagery Creek.

* In 1893 the railway reached Manildra - it was the line from Molong to Parkes.

* In 1904 the first Flour Mill in the district was opened in Cargo.

* A new and larger school building was opened in 1910.

* In 1923 local businessman, Allan Tom, started a travelling picture show based in Manildra.

* Six businesses were destroyed by fire in February, 1925.

* In 1926 the School of Arts and Memorial Hall opened.

* In 1936 Tom's picture theatre found a permanent home in what is now the Movie Poster Museum.

* The Manildra Flour Mill started as a family business in 1952.

* By 1975 local school students were being bussed to Molong to complete their high school education.

* In 1991 MSM Milling started processing canola oil in the town.

* In 2005 MSM Milling and the Manildra Group formed a joint venture.

There is useful information at http://www.orange-nsw.com/Manildra.html. 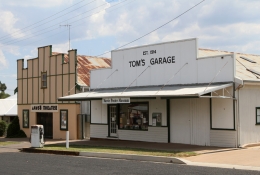 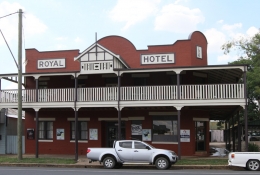 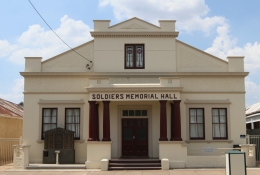 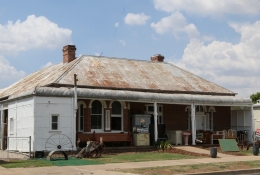 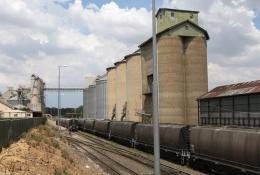 The grain silos at the Manildra Flour Mill 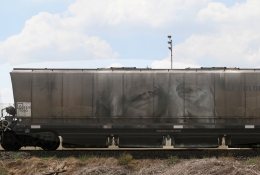 The face of a local worker, painted by Guido van Helten, on a Manildra train wagon. 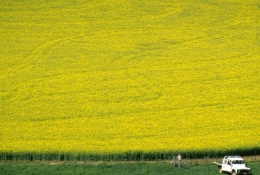 Canola fields in the Manildra area 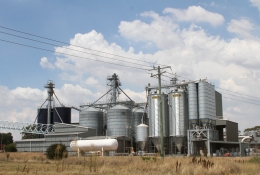