Quiet rural service centre at the junction of the Namoi and Manilla Rivers.

Manilla is a quiet service centre in a rich wheat-growing, wool, mixed farming and fat lamb district at the junction of the Namoi and Manilla Rivers. In recent times it has become internationally famous as a result of the hard work and commitment of Godfrey Wenness who has developed Mount Borah as an outstanding paragliding destination. Beyond that it is surrounded by rich countryside which makes the local dams - Lake Keepit and Split Rock - attractive leisure destinations and Warrabah National Park an ideal place for bushwalkers.

Manilla is 363 m above sea level, 45 km north of Tamworth on the Fossickers Way and 450 km north of Sydney via the New England Highway.

The history of the naming of Manilla is quite complicated. By 1853 George Veness had selected a property at the junction of the Namoi and Manilla Rivers which had become a teamsters' campsite known as 'The Junction'. He built a wine-shop, a store and a residence and later became the first postmaster. Veness was asked by the postal department to choose a name for the village and chose Manilla after the Manilla River which had been called the 'Manellae' which may have been a reference to the group of Aborigines who lived on its banks or which may have been a Kamilaroi Aboriginal word meaning "winding river". There is a popular myth that an ex-sailor who had visited Manilla in the Philippines encouraged the change in spelling.

Manilla Heritage Museum
Located at 197 Manilla Street and open seven days a week from 9.00 am - 3.30 pm this museum complex, which opened in 1975, includes the Pioneer Park, the Yarramanbully schoolhouse, a Chinese Memorial Garden, Henry Burrell's platypusary and the original house. The latter was originally a family home erected in 1884 by G.H. Royce, the building contractor who constructed the original bridge over the Namoi River. In 1900 the home became a bakery (built on at the rear) with the shop section added to the front. It is the only remaining building of that era on the main street; many others being destroyed by fires in the 1900s. The entrance is through the local Visitor Information Centre, tel: (02) 6785 1207. There is a useful website. Check out http://www.manillamuseum.com.au. There is a useful brochure which can be downloaded. Check out http://www.fossickersway.com/SiteFiles/fossickerswaycom/Manilla_Heritage_Museum_Flyer_2012.pdf.

Manilla Rural Museum
The Manilla and District Rural Collection of history farm machinery is stored in Alexander Lane (behind the supermarket) and can be accessed between 10.00 am - 3.00 pm on Friday and Saturday or by tel: 0428 421 668.

Manilla Weir
Located off Stafford Street at the eastern end of town is the very pretty Manilla Weir on the Namoi River. It is a pleasant place for a picnic, barbecue or to fish in the river.

Gliding, Paragliding and Ultralight Aircraft
Manilla has become internationally famous as a major sports flying centre with hang gliding, paragliding, ultralight aircraft, gyrocopters and gliders (sailplanes) being flown both recreationally and competitively in the district. Mount Borah, at an elevation of 880 m, provides excellent flying conditions and facilities, with four launching pads to suit nearly every wind direction and is now recognised as one of the worlds best Paraglider and Hang Glider launch sites. Much of the inspiration has come from local enthusiast and champion, Godfrey Wenness who developed Mount Borah. In 1998 Wenness became internationally famous when he paraglided for a World Distance record of 335 km. Major free-flight competitions are staged annually during the summer months. The 10th FAI Paragliding World Championships were held at the site in 2007, attended by 150 pilots from 41 nations. In the week prior to the event Manilla was in the headlines around the world for the survival of paraglider pilot Ewa Wisnierska of Germany who was sucked up into a thunderstorm to 9946m (32,000 ft). Check out http://www.flymanilla.com for more details. The Fly Manilla website points out that: "Since 1994 Manilla has hosted 18 international level paragliding events organised by Godfrey Wenness, 15 NSW State Hang Gliding Championships organised by Newcastle HG Club, and many annual fly-in's including the famous easter-time PG State of Origin which attracts over 100 pilots and is the largest paragliding event in Australia aside from the main international one held here."

Lake Keepit State Park and the Keepit Dam
A dam at Keepit on the Namoi River was first mooted as early as 1896. Work did not begin on the dam until 1938. The war delayed it and the Keepit Dam was not officially opened until 1960. The dam wall was 53 m high and the total cost was £12 million. Today the Manilla end of the Keepit Dam is a popular recreation area, used for fishing, boating and water skiing. The park has an area of 32.3 hectares and includes facilities for camping and caravans. The Lake Keepit Recreation Area turnoff is 34 km south-west of Manilla and is ideal and popular for water skiing, fishing (the lake is noted for silver and golden perch, Murray cod and catfish), swimming, sailing, windsurfing and power boating, with fishing boats for hire. Children's facilities include a children's pool, a BMX track, a skateboarding area, a water park and a roller-skating rink. There are barbecues, a kiosk, toilets, half-court tennis and a five-hole golf course. Check out http://www.stateparks.nsw.gov.au/lake_keepit for more details.

Warrabah National Park
Warrabah National Park is 40 km north-east of Manilla on the Halls Creek Road. The Upper Namoi River descends 220 m as it traverses 18 km of striking gorge country, offering a number of large grade 3 rapids before flowing gently past the car camping and picnic area at the park entrance. Bushwalking, bush camping, canoeing, rock climbing, abseiling, fishing and swimming can all be pursued, The National Parks website explains the appeal: "One of the few inland river parks in NSW, beautiful Warrabah National Park, just east of Manilla and north of Tamworth, has an incredibly tranquil atmosphere thanks in large part to the spectacular Namoi River. The park is bisected by over 14 km of the river in a dramatic gorge. Massive granite boulders perch high above the valley’s deep, calm pools and the swelling river rapids offer the promise of exciting adventures for intrepid canoeists. Naturally, most visitors to the park base their exploration of the park around riverside activities, such as swimming, fishing, liloing, and canoeing, or vehicle-based camping, bushwalking and picnicking by the water." Check out http://www.nationalparks.nsw.gov.au/visit-a-park/parks/Warrabah-National-Park for more details.

Split Rock Dam
Located 28 km north of Manilla via the Fossickers Highway and located on the Manilla River, the Split Rock Dam was built between 1984-1988. Today it can store 397,000 megalitres. It provides camping and recreation facilities, including boat ramps, barbecues and picnic areas. It is a popular location for fishing, boating, swimming and water skiing. Head north towards Barraba for 20 km, turn right at the clearly sign posted turnoff and it is another 8 km.

* Prior to European occupation the area was home to the Kamilaroi Aboriginal people.

* By 1828 Harvest and Otto Baldwin of Singleton were occupying land about 10 km south of the present site of the town.

* The Baldwin family took up the 32,000 acre Dinnawirindi station in 1837. It was one of six cattle stations in the area and included all the land Manilla now stands on.

* In 1853 George Veness selected a property at the junction of the Namoi and Manilla Rivers. It was a teamsters' campsite known as 'The Junction'. He built a wine-shop, a store and a residence and became the first postmaster. Veness was asked by the postal department to choose a title for the village and named it after the Manilla River.

* The town was laid out in the early 1860s by Arthur Dewhurst who named its streets after himself, his wife, their English home towns, and the local MP Charles Lloyd.

* Manilla was formally gazetted in 1863 and town allotments were sold that same year.

* In 1864 George Veness's store was washed away by floods. The flood killed killed four of the town's twelve residents.

* Bushranger 'Thunderbolt' (alias Fred Ward) stole two horses from Lloyd's station and committed a series of robberies on the Barabba road in 1865.

* In 1866 Manilla was described by the NSW Gazetteer as a 'postal town' in a pastoral and quartz mining district. There was a hotel, an inn and a district population of 50.

* In 1867 Captain Thunderbold bailed up the Tamworth Mail 3 km from Manilla. He then proceeded to Hill's public house. At Veness's store he robbed everyone and stole clothes, spirits and groceries. The police arrived and he fled without his pack horse which carried some of his gains.

* In 1875 a small private school was established in the town.

* By 1880 the area around the town was dominated by sheep farming.

* In 1883 Dinnawirindi station was taken over by Charles Baldwin (on the death of Otto Baldwin) and developed into a thoroughbred horse stud.

* Manilla was officially proclaimed a town in 1885.

* The Manilla Court House was completed in 1886.

* In 1890 the editor of the Tamworth Observer described Manilla as a town which promised a prosperous future, and commented on the imposing bridge crossing the river, the stately court house, the well kept orchards and pretty flower gardens. He reported that there were two stores, two blacksmith shops, a branch of the Commercial bank, two butchers shops, a saddlers shop, several carpenters and a brickworks.

* St Michael's Roman Catholic Church was consecrated in 1894. It was destroyed by fire in 1971.

* Tobacco was first grown in the district by a Chinese farmer in 1896.

* The railway reached Manilla in 1899. That year a flour mill was built in the town.

* A series of fires between 1900-1910 destroyed many buildings in the centre of the town.

* Manilla became a municipality in 1901, at which time the population was 780. That same year the local Manilla Public School was opened.

* In 1905 the council installed lights on the local bridge. Electric light became available in 1915.

* By 1923 there were 17 tobacco plantations in the district.

* In January 1964 a flood forced one third of the town's population to evacuate.

* In the 1970s impresario, Harry M Miller, established a large herd of German Simmental cattle at Dunmore near the town. 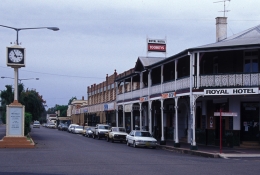 The main street and Royal Hotel (circa 1990) 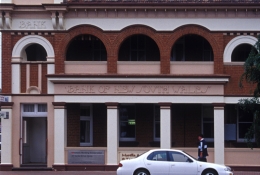 The elaborate facade of the Bank of New South Wales in the main street. 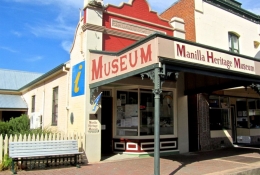 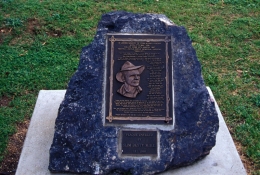 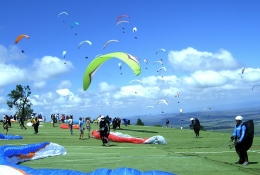