Historically an important river port, today Mannum is a pleasant holiday town on the Murray River with extensive parks and numerous river-based attractions. It caters for a variety of water activities - paddle steamer cruises, kayaking adventures, wildlife sanctuaries - and there is both fishing and bird watching. The main attraction is to get out on the river either on the PS Marion or the PS Murray Princess and marvel at the beauty of this vast waterway.

Mannum is located on the banks of the Murray River 81 km east of Adelaide and 13 metres above sea level.

It is accepted that the word "Mannum" is a local Aboriginal term meaning "the place of many ducks".

Paddle Steamer Marion
Located at Arnold Park Wharf on the river front at the Mannum Dock Museum, 6 Randell Street, this historic paddle steamer was constructed in 1897 and used as a pleasure craft on Lake Alexandrina before being brought to Mannum where it has been restored. It now operates as a passenger vessel. It is recognised as one of the last steam driven, wood fired, original, overnight passenger carrying side wheelers in the world. For details tel: 1300 626 686 or check http://www.psmarion.com/cruises for times of cruises.

Mannum Dock Museum of River History
The Mannum Dock Museum of River History is located at 6 Randell Street, on the banks of the River Murray. The Museum includes the PS Marion, the PS Mayflower, the historic Randell Dry Dock, the Key Beam Engine, Arnold Art Gallery and the Mannum Visitor Information Centre.
The Museum collection includes some rare fossils; a display of Ngarrindjeri Aboriginal artefacts; an extensive collection of photographs and documents recording the history of the Murray River; some small boats & model paddle steamers; a shearer stripper, made by Shearers Agricultural at Mannum in the early 1900s; a wool press and historic milling and baking equipment. The Museum, which was opened in 2001, is open from 9.00 am - 5.00 pm Monday to Friday and 10.00 am - 4.00 pm on weekends.

Paddle Steamer Mayflower
The PS Mayflower was built in Moama in 1884 by Wilson & Burkett for Daniel Alexander and is the oldest original paddle steamer in South Australia. It was purchased by the Dock Museum in 2004, restored to its former glory, and now offers 90 minute cruises on the Murray. Check out http://mannum.org.au/news/pw-mayflower-cruises-229.html for details.

Paddle Steamer Mary Ann boiler
This is a remnant of the first paddle steamer in Australia and the first paddle steamer to trade on the Murray River. The PS Mary Ann was launched in Mannum in 1853 by William Randell. There is a lengthy history of the vessel at http://mannum.org.au/ps-mary-ann.html which records that "The boiler is ... a strange-looking object, two stories are told to explain why it is oblong, not round like other boilers – one that there was no suitable iron to be had; the other that the blacksmith who made it had no idea of how to make a round one. It still carries bulges it developed the first time it was fired, before chains were wrapped round it to keep it in something like a proper shape. Looking at it, one can readily see the reason why when steam was got up for the first time the engineer and probably everyone else on the spot, went and lay down in the bush for fear it would blow up."

Randell Dry Dock
The heritage listed dry dock was one of only two timber floating docks built in Australia and was the only one on the Murray-Darling river system. It was constructed in 1876 and installed by William Randell to service his fleet of steamers. The SA Heritage Places Database notes: "The Randell Dry Dock, completed in 1876 during the peak of the river trade and operating for the next fifty years, is historically significant as a relic of the inland river transport system and its importance as a transport corridor in opening European development of the interior of the continent. Commissioned by wool merchant and ship owner A H Landseer and built in Milang in 1873, it was designed as a floating dry dock. In 1876 it was purchased by Captain William Randell and installed at Mannum as a dry ('graving') dock, thereby greatly extending Randell's small ship building and repair facility there. One of only a few timber floating dry docks ever built in Australia, it was the only facility of its type on the Murray Darling River system, and is one of the few which remain in any significant form in the world." See http://maps.sa.gov.au/heritagesearch/HeritageItem.aspx?p_heritageno=16298 for more detailed information.

Key Beam Engine
Built in 1854 the Key Beam Steam Engine has been fully restored. The engine was used to pump water from the dry dock and is the only working one of its type in Australia. There are special times when it operates. Check out http://community.history.sa.gov.au/events/2011/see-key-beam-engine-operation.

Clayton & Shuttleworth Portable Steam Engine
The Museum website explains: "Noteworthy in River Murray history is the Clayton and Shuttleworth semi portable steam engine. A significant object in the Museum’s collection the engine is only 12 years younger than the Mary Ann’s boiler. Though not finally proven the engine is considered to be the oldest piece of paddle boat machinery on the River Murray. It almost certainly was the original plant installed in the PS Murrumbidgee launched in 1865 as a stern wheeler before being converted to a conventional side wheeler." For more information check out http://www.psmarion.com/events-exhibitions.

Mary Ann Reserve
Located in River Lane and named after the PS Mary Ann, the first paddle steamer to ply the Murray River, this beautiful riverside park is ideal for picnics and relaxing beside the Murray River.

Scenic Lookout
Located at the end of Crawford Crescent this lookout offers panoramic views over the Murray River and the town. There is plenty of parking

Historic Walks
There are three historic walks around Mannum. A useful map can be downloaded at https://www.walkingsa.org.au/walk/find-a-place-to-walk/the-randell-walk-mannum.au/mannum/randell-walk,

Randell Walk - 60-90 minutes
The Randell Walk starts at the Visitor Information Centre on Randell Street and includes the Woolshed built by William Randell in 1854; Frank Randell's house (1872); the Lutheran Church (1882) and manse (1896); the Hermann Gass Bird Sanctuary and the Dry Dock. The walk is described in detail at http://www.murrayriver.com.au/mannum/randell-walk.

Shearer's Walk - 40 minutes
Named after David and John Shearer, this walk starts at the Visitor Centre and includes the Woolshed built by William Randell in 1854; the town's first gaol; the main historic buildings on Randell Street; and the Shearer factory site. The walk is described in great detail at http://www.murrayriver.com.au/mannum/shearer-walk.

Arnold Walk - 60-120 minutes
The Arnold Walk, named after Johan Georg Arnold, starts at the Memorial Gates at the Mannum Showground. The details are described at http://www.murrayriver.com.au/mannum/arnold-walk.

PS Murray Princess
Cruising on the Murray is the perfect way to experience the river. Heading out from Mannum the PS Murray Princess boasts that it is the “largest and most luxuriously appointed paddle wheeler, purpose built for just 120 passengers. The graceful paddlewheel, mahogany furnishings and spiral staircases, reflect the elegance of a grand era of paddle steamer cruising.” The cabins are large and comfortable, the pace is leisurely, and there are endless shore-based activities for those who want to experience life in a woolshed, nocturnal native animal tours, historic riverside museums, vineyards and Aboriginal archaeological sites. It is equally possible to just sit in the lounge and watch the paddles slowly turning or wander around the decks trying to spot the many pelicans, spoon-beaked egrets, blue wrens, corellas and black swans which glide and soar past the boat as it makes its way slowly up and down the river. The PS Murray Princess offers three, four and seven day tours from Mannum up to Swan Reach. Details, brochures and pricing can be found at https://www.murrayprincess.com.au/cruises or tel: 1800 553 314.

Four Knots Murray River Cruises
Departing from Mannum Waters Marina daily at 1.30 pm on a 90 minute cruise of the river, the MV Jester offers a good taste of a Murray River cruise. The website explains: "Get up close and personal with nature – unique birdlife, the flora and fauna of the riverbanks, viewed through panoramic windows or from the surrounding deck." For more information tel: 0418 354 222 or check out http://www.fourknotsmurrayrivercruises.com.au.

Mannum Waterfalls
Located 6 km from Mannum on the Mannum-Murray Bridge Road, the Mannum Waterfalls are a popular bushwalking destination with interesting geology and plenty of wildlife. They are not recommended during the hot summer months. There is both an easy and a difficult access point: the first car park involves a one kilometre steep walk to the falls; the second car park is located above the falls and involves a short walk down to the falls. Check out http://mannum.org.au/directory/mannum-waterfalls-219.html for more information.

* Prior to European settlement the area was inhabited by the Nganguruku Aborigines who one early settler described as "very friendly and quickly picked up a smattering of English. They were willing to work ... and attempted to instruct the newcomers in their methods of hunting." The Murray provided them with a diet of kangaroos, emus, wombats, goannas, lizards, ducks, turtles, fish, snakes and bird eggs.

* The first European in the area was Captain Charles Sturt who rowed a whale boat down the Murrumbidgee in late 1829. He passed Mannum in early February and reached Lake Alexandrina, at the mouth of the river, on 9 February, 1830.

* In 1838 George Imlay and John Hill reached the area by riding from Adelaide.

* By 1840 the land around Mannum had been surveyed and, although the river was not being commercially used at the time, people started to lease and purchase the land.

* The explorer Edward John Eyre took up land near the town in 1841.

* By the 1860s up to 20,000 bales of wool were being brought down the river each season. The steamers were used to move huge barges which were laden with wool. Some went to Goolwa and on to Port Elliot. Others were unloaded at Mannum and overlanded to Adelaide by bullock teams.

* In 1863 the town's first store opened. It was run by Thomas Randell's wife.

* In the 1870s David and John Shearer established a blacksmith business in the town. They built Australia's first car (it was driven by a steam engine which was fired by mallee timber) and the company evolved into Horwood Bagshaw, a successful engineering company.

* In 1877 the District Council of Mannum was proclaimed.

* By the 1870s and 1880s many Germans had moved into the area. Agriculture along the riverbanks was becoming the mainstay of the town's economy.

* By 1902 the town had kerosene street lighting.

* The first telephone was installed in the town in 1906.

* Street electric lighting was installed in 1923.

* In 1931 the town experienced a record high flood.

* In 1954 the Mannum-Adelaide pipeline was installed.

* The town was again seriously flooded in 1956.

* Today Mannum sees itself as the paddle steamer centre of the Murray River.

There is an official local website. Check out http://mannum.org.au. 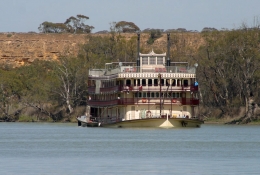 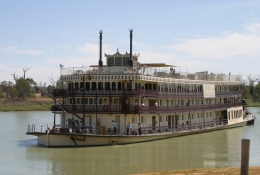 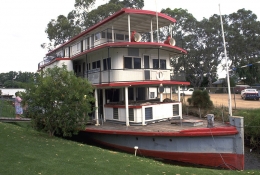 The P.S. Marion - an historic paddlesteamer 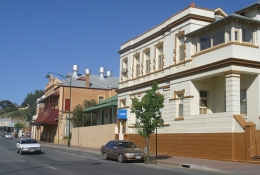