Town on the edge of the Southern Alps famous for where the Kelly Gang killed three policemen.

Mansfield is a gracious town of wide streets and historic buildings. Situated on Fords Creek in a valley at the foothills of the Great Dividing Range, it has become a resort town and popular winter base for skiers headed to Mount Buller and Mount Stirling. The beautiful and dramatic local scenery attracted filmmakers who used the surrounding countryside as the setting for the two Man From Snowy River films.

Mansfield is located 189 km north-east of Melbourne via the Melba, Goulburn Valley and Maroondah Highways and 316 m above sea-level.

Lonigan, Kennedy and Scanlon Monument
At the centre of the town, on the roundabout at the corner of High and Highett Streets, a marble monument erected in 1880 as a tribute to Constables Lonigan, Kennedy and Scanlon who were killed by Ned Kelly at Stringybark Creek. The handsome monument is inscribed: "In Memorium - Michael Kennedy, Born in Westmeath, Ireland. Aged 36 years. Thomas Lonigan, Born at Sligo, Ireland. Aged 34 years. Michael Scanlan, Born Kerry, Ireland. Aged 35 years. This monument is erected by subscription from the inhabitants of Victoria and New South Wales; A.D. 1880."

Mansfield Court House
On the corner of High and Highett Streets is the town's historic Court House. Built in 1876 it was here in 1878, following the killing of three policemen at Stringybark Creek, that the Kelly Gang were proclaimed outlaws under the Felons Apprehension Act.

The proclamation "ordered Ned Kelly and Dan Kelly and their two as yet unidentified accomplices (Joe Byrne and Steve Hart) to surrender to the Mansfield Court House on 12 November, 1878. If they didn't do so they would become outlaws. The Courthouse remained opened all day on the 12th but the two Kelly brothers and their accomplices did not surrender. Three days later the four were declared outlaws and could be killed without challenge. Further, any person harbouring, concealing or assisting the Gang, giving them information or withholding information from the police, could receive up to 15 years imprisonment with or without hard labour."

Visitor Centre and Interpretative Poles
The new Visitor Centre, apart from being an impressive building, has a fascinating collection of interpretative poles. Each of the poles represents a different aspect of the history and culture of Mansfield. Spare some time and carefully inspect each one. There is:

(a) an indigenous pole recalling the history of the local Taungurung people before the arrival of Europeans and the subsequent massacres and destruction of their culture.
(b) a Sound Pole with the voices of an alluvial miner, horseman, horsewoman, Aborigine, pioneer skier and bushman recalling the history of the area.
(c) a pole recalling the importance of the early timber workers in the area.
(d) the Ned Kelly pole with the famous armour.
(e) a silhouette of a High Country horseman with all his skills and his ability to muster cattle
(f) the pole of the Bogong Moths who are such an integral part of the local experience
(g) a ski pole recalling the snow fields, the first ski lift and the development of the ski industry.
(h) a pole recalling the discovery of gold in the area
(i) and poles recording the fauna and flora which is unique to the area.

It is a brilliant and unusual introduction to Mansfield and the surrounding area.

Mansfield Historical Society
Located only metres away from the Visitor Information Centre are an important Aboriginal canoe tree (as you walk towards the Railway Station) and the new home of the local historical society - the Mansfield Railway Station. The Historical Society was established in 1983 and the museum has historical files, photographs, displays, memorabilia and maps relating to the local area. It is open Friday, Saturday and Sunday from 11.00 am - 3.00 pm. Behind the building there is some railway rolling stock and nearby are some distinctive kilns built in 1948 and used to burn off sawdust from the local timber mills.

Highton Manor
Built in 1896 for Victorian tennis champion, Francis Highett,  Highton Manor in Highton Lane was the town's first two-storey brick home. Set in spacious gardens it is an impressive house which features high ceilings, old world charm and stained-glass windows. Highett was not only a champion tennis player but a notable singer. He sang with Dame Nellie Melba and performed at St Paul's Cathedral in London. Highett often retreated to the tower where he meditated. It is said that he communicated with his family through a speaking tube which still can be seen. Today the building is a restaurant and offers accommodation.

Powers Lookout
The Mansfield-Whitfield Road which runs north-east from Mansfield offers good views across King River Valley. One of the best viewing areas is Powers Lookout. It was named after the bushranger Harry Power who reputedly used it as an important vantage point to keep an eye on approaching police. Powers is famous because of his association with a 15-year-old Ned Kelly who was charged with being his accomplice in 1870. The charges were dismissed.

Kelly Tree, Stringybark Creek, Tolmie
The setting for the infamous gunfight where the Kelly Gang killed three policemen in 1878 is located 30 minutes from Mansfield in Stringybark Reserve which is on the Tolmie-Tatong Road which runs off Mansfield-Whitfield Road. The Kelly Tree, where the gunfight took place, is clearly marked.

Mount Samaria State Park
Located 28 km south of Benalla the Mount Samaria State Park (7,600 ha) is a shady eucalypt forest which is ideal for walking, camping and picnicking. It was used by the Yorta Yorta people prior to the grazing and logging from the 1840s through to the late 1920s. Parks Victoria describe the park as "Beneath the majestic Blue Gums and Mountain Grey Gum, the moist environment supports a dense understorey of wattles, dogwood and bracken. The drier forests of stringybarks, boxes and peppermints expose an open understorey of hardy shrubs and tussock grasses. An array of wildflowers include peas, trigger plants, everlasting daisies, milkmaids and orchids.

Mount Samaria hosts a variety of Australian wildlife including kangaroos, wallabies, wombats, echidnas, possums and gliders, and the granite rocks provide warm homes for a variety of lizards and snakes. The park is also a haven for many birds including Lyrebirds, rosellas and the gracious Wedge-tailed Eagle."

There are a number of excellent bushwalks in the park including

There is a downloadable map with details of the park's five walks available at http://parkweb.vic.gov.au/__data/assets/pdf_file/0017/315611/Park-note-Mount-Samaria-State-Park.pdf

Howqua Hills, now part of Parks Victoria, has a fascinating history. Pre-European settlement the Howqua River was used by Aborigines as a major trade and war route. They had several quarries in the area where they dug out the hard Howqua greenstone which they used for spearheads, stone axes and cutting tools.

In the 1840s the land was taken up by the Watson and Hunter Pastoral Company. It is still used for grazing today.

Gold was discovered in the valley in the 1860s and a major reef was located in the 1870s. Three large companies - Mountain Chief, Grand Rand and Howqua United - were established and the township of Howqua was proclaimed in 1888. There was an hotel, a post office, some boarding houses, a blacksmith's and a butcher's.

Mining ceased in 1905 and Howqua was abandoned. Today only a small number of relics remain from the gold mining days. Tunnel Bend is named after the 100 m tunnel built in 1884 as a link between Howqua River and the 4 km hand cut water race to the Hanney waterwheel at Sheepyard Flat. The tunnel entrance can still be seen. The remains of the water race can be seen and a brick chimney associated with a smelting furnace is still standing.

Fry's Hut was built in the late 1930s by local bushman Fred Fry using split timber. Fry's life formed the basis of Nevil Shute's 1950 novel The Far Country which was later filmed in the area. Parks Victoria have an excellent brochure with map which can be downloaded at http://parkweb.vic.gov.au/__data/assets/pdf_file/0020/313805/Park-note-Howqua-Hills-Historic-Area.pdf

* Prior to European settlement the area was occupied by the Youngillim or Wuywurrung Aborigines. They were part of the Kulin nation.

* By the late 1830s the Hunter and Watson Pastoral Company had leased much of the Mansfield Valley. Their first run was established in 1839 and their employees were probably the first Europeans to settle in the area.

* By 1842 the huge Hunter and Watson run had been subdivided into seven smaller properties. David Mitchell, the father of Dame Nellie Melba, established a lime quarry on one of those properties.

* In 1846 a small settlement at Mansfield became a designated stock route camp. The width of the main street was to enable bullock teams to do U-turns.

* The townsite was surveyed and lots sold in 1851. The settlement was developed as a service and supply centre for the gold mining camps which sprang up to the south in the 1850s.

* By the 1870s Mansfield was a service centre for the surrounding grazing, farming and timber getting community. Ned Kelly worked as a timber labourer in the area from 1874-1877.

* The district's greatest brush with fame occurred on 25 October, 1878, when Ned Kelly (who was only 22 at the time) and his younger brother Dan, with two companions (Steve Hart and Joe Byrne) engaged two local constables - McIntyre and Lonigan - in a gunfight. Kelly called on them to surrender, McIntyre, who was unarmed, complied but Thomas Lonigan jumped behind a log and when he raised his head to fire he was shot by Kelly and died almost immediately. At the time two other constables were searching for Kelly and his accomplices. Kelly instructed McIntyre that his colleagues should surrender when they returned. However when Michael Scanlan and Michael Kennedy returned they decided to fight and Kelly killed them both. McIntyre managed to escape and spread the news. The news shocked the country and as a consequence the gang members were outlawed and £500 rewards were offered for each man, alive or dead.

* Today Mansfield is an important stopover for skiers heading to Mount Buller and Mount Stirling. 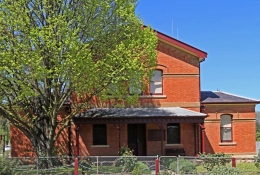 Mansfield Court House (1876) where the Kelly Gang were supposed to surrender. 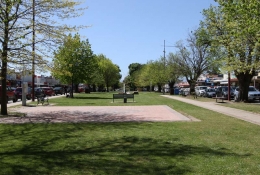 The park in the middle of Mansfield's main street.

The large marble monument erected in 1880 as a tribute to constables Lonigan, Kennedy and Scanlon who were killed by Ned Kelly at Stringybark Creek. 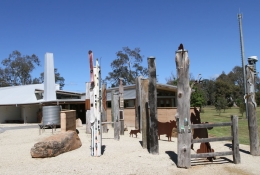 The interpretative poles outside the Visitor Information Centre. 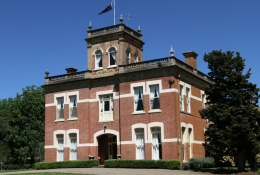