Quiet and idyllic fishing and holiday town at the southern end of the Yorke Peninsula.

Marion Bay at the Yorke Peninsula’s southern tip, and just on the edge of the wonderfully wild and untouched Innes National Park, is hardly a town. It is more a recreational fishing holiday destination with a jetty! It has less than 200 permanent residents and 70% of the houses are holiday rentals. There is a single motel and the very modest Marion Bay Tavern provides meals and drinks for visitors. The appeal of the town and its surrounds lies in the beautiful unspoilt coastal wilderness that is Innes National Park.

Marion Bay was named after the sailing ship Marion which was wrecked on Troubridge Shoal on 29 July, 1851.

Innes National Park
It is worth the effort. This is one of the true wonders of South Australia, a sublime and beautiful stretch of rugged coast hidden away from the excesses of tourism. Few people visit but what they find are lonely beaches, strange tales of dramatic shipwrecks, beautiful cliffs and beaches, and small numbers of dedicated anglers and surfers who know this is a special place where they never have to compete with crowds. The park comprises 9,415 hectares and has a diversity of fauna, flora and geology. In the winter months, because the park is on the edge of the Roaring Forties, the seas can be both wild and dangerous.

Walking in Innes National Park There are six interesting and rewarding walks in Innes National Park ranging from a very short, 30 minute walk to three hour treks through bushland and around the coastline.
Browns Beach to Gym Beach This walk is two hours one way (11 km return, 4 hours return). During the walk you will see huge sand dunes, a rich diversity of birdlife, unique flora and fauna and, if you do the walk in spring, expect to see wild orchids.
Cape Spencer Lighthouse Walk An easy walk lasting about thirty minutes will take the visitor to the Cape Spencer lighthouse. It is an automatic beacon which was commissioned in 1950 and upgraded to a cement lighthouse in 1970. It stands 78 metres above sea level and can be seen for 23 nautical miles. Cape Spencer overlooks Althorpe Island and, on a clear day, it is possible to see Kangaroo Island on the horizon.
Inneston Historic Walk This walk is a 2 km loop which takes around one hour. It is a well marked trail around old Inneston, a gypsum mining town which prospered in the early years of the twentieth century. The ruins, ranging from the old cricket ground to the post office and the farmyard stables is a reminder of the fragility of mining communities. When the gypsum had been removed there was no reason for the miners and their families to stay.
Royston Head Walk This walk is 4 km return and takes around two hours. This is one of those special coastal walks with dramatic, panoramic views over the peninsula and the waters of the gulf. There is an excellent lookout on the headland. Along the way signs provide information about the flora in the area.
Stenhouse Bay Lookout Walk This easy walk starts at the Stenhouse Bay carpark, is a 2 km loop which takes around one hour, and traverses the cliffs around the bay pausing at nine lookout points each of which has an interpretative sign. There are excellent views over Investigator Strait.
Thomson/Pfitzner Plaster Trail The Thomson/Pfitzner Plaster Trail runs between Inneston and Stenhouse Bay. It is 7.6 km return and takes around three hours. The trail follows an old wooden railway line which ran from the mining town to the jetty. There are interpretative signs along the way which help explain the history of the railway line and the lives of the miners.
West Cape Headland Hike The shortest of all the walks this is only one kilometre and takes around 30 minutes. It offers excellent vantage points with panoramic views across Pondalowie Bay, Wedge and Althorpe islands. The trail goes out to West Cape lighthouse which was constructed of stainless steel in 1980 and is fully automated. It stands 67 metres above sea level and has a range of 22 nautical miles. There is an interpretative maritime trail which tells the story of the shipwrecks in the area.

Bird watching in Innes National Park
Innes National Park is known to be the home to around 140 species of bird. The discovery of the Western Whip Bird as recently as 1962 (it is classified as rare to endangered) led to Innes National Park being classified in 1970 specifically to protect this rare bird's habitat. The National Parks and Wildlife brochure points out that bird watchers can expect to see mallee fowl and that "seabirds frequent the coastal zones and skies of Innes National Park. White-bellied sea-eagles, Pacific gulls and sooty oystercatchers are often seen. The osprey is sometimes seen gliding on wind currents."

Fauna in Innes National Park
There has been a program since 2004 to release mainland South Australian tammar wallabies in the park. They are an endangered animal. In 2004 ten were released. Another 36 were released in June 2005. As well as the tammar wallabies the park is also home to western grey kangaroos, brown snakes, sleepy lizards, eastern bearded dragons and between May and September southern right whales can be seen off the coast. There are also pods of dolphins which can sometimes be spotted from the lookouts.

Geology of Innes National Park
Innes National Park is predominantly sandstone which is constantly being eroded by the oceanic forces of the Spencer Gulf. The most interesting aspect of the geology of the park is the presence of stromatolites (they can also be seen at Shark Bay in Western Australia) ancient rock-like formations which have been on earth for 3,500 million years. They can be seen in the lakes in the park.

Surfing and Fishing
The park is noted  for its excellent surfing and fishing. Richards, West Cape, Pondalowie Bay and Chinamans Bay are known to surfers around Australia. Chinamans Beach has "a hollow, very powerful left hand reef break" and is for experienced surfers only; West Cape has a left hand break of up to two metres and is best when the wind is blowing from the north or northwest; Pondalowie Bay is known to be the safest with a medium rather than a heavy surf and Richards has "a good quality right hand beach/reef combination that breaks up to 1.5 metres."  Browns Beach is highly regarded by anglers.

Inneston
Both Innes National Park and the town of Inneston were named after William Innes who discovered gypsum in the area in the early 1900s. In 1913 Innes set up Inneston to house the people who would mine the gypsum. The town and the mine continued to operate until 1930. It is now possible to inspect the remnants of the old town and to stay in a number of the old buildings which have been sensitively updated by National Parks and Wildlife. Essentially Inneston is now a ghost town with lots of rusting old equipment, a crushing plant, a bakery, general store, a disused Post Office, stables and even a cricket pitch. It is well worth visiting. For accommodation details check out http://www.environment.sa.gov.au/parks/find_a_park/browse_by_region/yorke_peninsula/innes_national_park

Stenhouse Bay
Stenhouse Bay is located 8 km south of Marion Bay in Innes National Park. In the 1910s a jetty was built and for two decades Stenhouse Bay was a thriving port shipping salt and gypsum and having large hoppers and storage bins along the shoreline. Windjammers arrived regularly to load gypsum which was mined at Inneston and brought to the port on a short railway (see walks). Today the bay is popular with experienced divers and noted for its exceptionally clear waters and abundance of marine life.

Wreck of the Ethel
There is not much left of the Ethel now (just the bones of the ship on Ethel Beach) but the story of the shipwreck is a reminder of how dangerous the waters of Spencer Gulf were. The Ethel was a 711 ton barque which, caught by a force seven gale and five metre high waves, was washed onto Reef Head, now known as Ethel Beach.  The vessel was wrecked in 2 January, 1904. Today there is a memorial to the event on the cliffs which recalls the bravery of young Leonard Stenerson who attempted to swim to shore and was drowned in the attempt. There is a very detailed brochure available at the National Parks and Wildlife office.

Cape Spencer
An easy walk lasting about thirty minutes will take the visitor to the Cape Spencer lighthouse. It is an automatic beacon which was commissioned in 1950 and upgraded to the cement lighthouse in 1970. It stands 78 metres above sea level and can be seen for 23 nautical miles. Cape Spencer overlooks Althorpe Island and, on a clear day, it is possible to see Kangaroo Island on the horizon.

* The Wari group of the Narangga Aborigines lived in this area for tens of thousands of years before the arrival of Europeans. They lived off fish and crustaceans, left their markings on the rocks and left shell middens where they camped.

* By the 1820s sealers were in the area hoping to find seal colonies along the coast.

* By the 1840s settlers had been attracted to the area by the discovery of copper further north on the Yorke Peninsula.

* In 1847 there was sheep grazing near Cape Spencer and there was some low level cropping.

* In 1867 the Point Pierce Aboriginal Mission was established and most of the indigenous people in the area drifted towards the mission.

* the town of Inneston was established in 1913 to mine gypsum.

* By the 1920s there were around 200 people living in the town (about 120 families) and it was self-contained as there were few outside facilities available.

* In 1930 Inneston closed down when the gypsum mining ceased.

* Today Marion Bay has a safe swimming beach and the port and jetty area are used by a number of fishing craft. There are also dive and fishing charter vessels.

Innes National Park Heritage Accommodation is a unique option for people who want to stay in the park in the old buildings (suitably updated) at Inneston. The Engineers Lodge and Managers Lodge both hold 10; the Gatehouse Lodge and Miners Lodge accommodate 6; and the Norfolk Lodge accommodates 4. A PDF can be downloaded at http://www.environment.sa.gov.au/parks/find_a_park/browse_by_region/yorke_peninsula/innes_national_park

South Australian Tourism has a general website on the Yorke Peninsula - http://www.southaustralia.com/regions/yorke-peninsula.aspx - but the most useful website is http://www.environment.sa.gov.au/parks/find_a_park/browse_by_region/yorke_peninsula/innes_national_park which has a range of very detailed downloadable PDFs relating to the park. 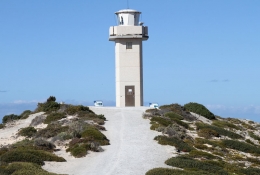 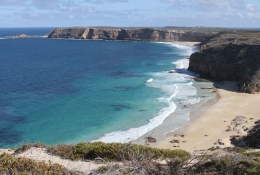 View along the coast in Innes National Park 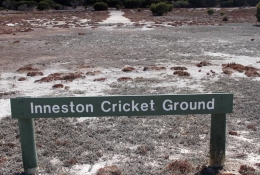 The remnants of the cricket ground at the historic gypsum mining town of Inneston. 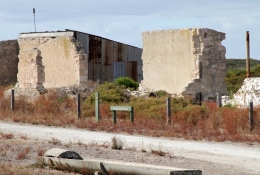 The ruins of the farmstead stables at Inneston in Innes National Park. 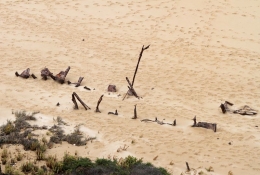 All that is left of the wreck of the iron barque Ethel on Ethel Beach in Innes National Park. 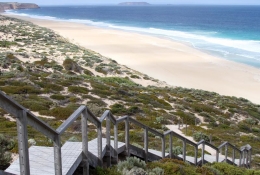 The view along the coast from West Cape Headland Walk in Innes National Park. 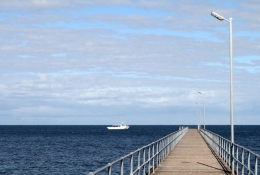 The jetty at Marion Bay dates from 1889 and is now used by recreational anglers. 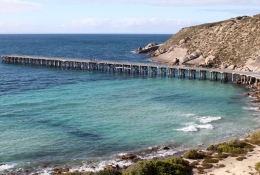 The historic jetty at Stenhouse Bay now popular with anglers and divers.