Tiny lonely town on the road between Rockhampton and Mackay

Marlborough is a small rural service centre, comprising a Post Office, hotel, caravan park, convenience store, swimming pool and service station, for the surrounding cattle-raising area where Brahmin, Hereford, Braford (a Brahman-Hereford cross), Santa Gertrudis and Simmental are all grazed. It is the only place of importance on the 336 km long journey between Rockhampton and Mackay. In the 1980s a local, Martin Hennessy, using his own money, built and filled the Marlborough Historical Museum. Hennessy would regale visitors with wonderful stories of the area and proudly declare "I am the history of Marlborough". He also claimed to have trained his cow to be a dog. Today Hennessy's museum still stands and has been expanded considerably by local volunteers.

Marlborough is located 107 km north west of Rockhampton and 723 km north of Brisbane on Highway 1.

No one is sure exactly who had the fascination with the Duke of Marlborough but, when the land was taken up in 1857 and 1858 all the properties had name associations with John Churchill, the first Duke of Marlborough. He had fought at the Battle of Ramillies (1706), the Battle of Blenheim (1704), Oudenarde (1708) and Malplaquet (1709) and the first four properties in the area were all named after those battles. When they were amalgamated in 1869 it was logical to give them a single name that bound them all together - Marlborough.

The Marlborough Museum
In this modern building is memorabilia collected from the local area by Martin Hennessy and expanded since it opened in the 1980s. Today it includes displays of Chrysoprase, a 100-year-old kerosene driven tractor, a bull's head and a dairy display, a complete blacksmith's shop, vintage cars, sulkies and wagons. The museum is open Monday, Wednesday and Friday from 10.00 am - 4.00 pm.

Chrysoprase
Marlborough is famous in the jewellery business for producing the world's finest chrysoprase, a semi-precious gem once much admired by Alexander the Great and Cleopatra. The small but high-grade deposit is regarded as the most valuable find of Chrysoprase in the world.
There is an impressive sample over the road from the museum. A plaque on the side of the rock explains" Chrysoprase is a gemstone variety of Chalcedony that contains small quantities of nickel. Its colour is normally apple-green, but varies to deep green. It has been a valued gem since antiquity worn by Cleopatra and Alexander the Great and many other famous identities. The Chrysoprase at Marlborough occurs in the nickel laterite formations 20 km to the south-west of the township and has been mined in the area since the 1950s. This example shows Chrysoprase seaming in the iron rich serpentinite matrix. It came from the Candala Pty Ltd mining leases and was donated by Coolamon Mining for public display in the township. It was removed from the site and located here with the assistance of Gumigil Pty Ltd and the former Livingstone Shire Council and councillor John Smith. Marlborough Chrysoprase is recognised internationally as the world's finest quality and is highly prized by famous jewellery designers and museums alike."

* Prior to the arrival of Europeans the area was occupied by people from the Darumbal Aboriginal language group.

* Marlborough came into existence in 1856 when a pub was built to provide accommodation, food and drink for the pastoralists who moved into the area to claim land and open up the cattle runs. The original pub was positioned at the junction of the coach road going west to the Peak Downs goldfields and another road running north along the coast.

* By 1857 Dan O'Connor had settled at a property he called Old Marlborough.

* In 1858 16,000 acre runs known as Blenheim, Ramillies, Oudenarde (Oudenaarde) and Malplaquet were leased for eight years.

* In 1869 the 16,000 acre holdings in the area were amalgamated and called Marlborough.

* In 1917 the town was relocated as the railway bypassed the original site. That same year 88 lots of land was offered for sale.

* More recently it has been bypassed by the Bruce Highway.

The closest visitor centres are at Sarina to the north or Rockhampton to the south. 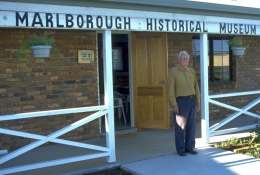 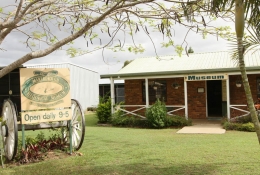 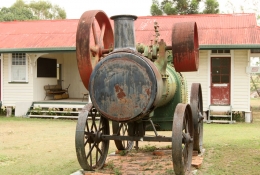 A steam engine and the old railway station in the grounds of the Marlborough Museum. 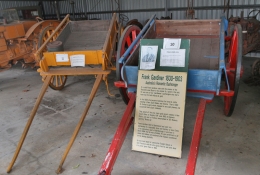 Sulkies, and the story of Frank Gardiner's connection to the local area, in the shed behind the museum. 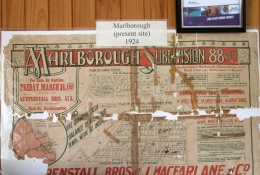 The original subdivision poster from 1917 in the museum. 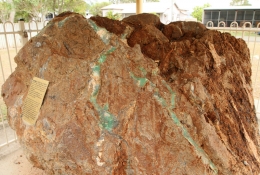 The sample of Chrysoprase located over the road from the Marlborough Museum.