Quiet holiday town at the mouth of the Snowy River

Marlo is a sleepy seaside town perched about 90 m above sea level on a headland overlooking the flood plain and estuary of the Snowy River. The town is surrounding by unspoilt waterways and beaches, rich river flats which are ideal for cattle grazing, and sheltered estuarine waters which produce some of the best perch and bream fishing in Australia. Marlo is known as an ideal destination for bushwalking, bird-watching, remote beaches and water-based activities.
The peacefulness and beauty of the area has inspired writers with one, in 1886, insisting that "Nothing can be lovelier than the early morning at Marlo, with sea, and sky, and land glowing in the tints of recent dawning ..." and another eulogising that "Marlo is one of these peaceful, out-of-the-way places, where nerves and worries, and the disappointments of cities may be curbed or forgotten. The little seaside hamlet is perched on the side of a scrubby hill, where the shingled roofs of a few old bush cottages, and a hotel, give just the necessary touch of habitation."

Marlo is located on the East Gippsland coast 15 km south of Orbost and 386 km east of Melbourne via the Princes Highway.

Marlo is reputedly a local Aboriginal word for "kangaroo".

The Mouth of the Snowy River
It is one of those trivia questions that very few people know the answer to: "What is the town at the mouth of the Snowy River?" The Snowy winds through the low-lying, fertile river flats and then turns north and runs beside the sea protected by a long line of sand dunes. At low tide it is possible, if you are prepared to go for a short swim, to cross the river and walk out to the entrance of the river which has become a popular surfing location. Otherwise, very conveniently, there is a Marine Parade which runs along the top of the ridge above the river and offers a number of good viewing points and an excellent walking track.

Fishing in the Area and the Corringle Slips
Marlo has a number of boat ramps and slipways (it really does cater for anglers) including the historic Corringle Slips on the far side of the river opposite the town. Access to the Corringle Slips is via Corringle Road which leaves the Princes Highway at Newmerella south of Orbost. The Corringle Slips were built by Samuel Richardson (who built the PS Curlip) when the Orbost Shipping Company was operating. The Slips were washed away in the 1893 floods and reassembled by Martin Jorgensen who then became a part owner. The Slips have camping facilities, toilets, a picnic area and are known as a good fishing location. It is recognised that surf fishing is best at Frenches Narrows, Point Ricardo, Yeerung, Corringle and around the Snowy River estuary.

Estuary Walk
The Snowy River Estuary Walk runs from Marine Parade to Frenches Narrows and provides an opportunity to explore the unique environs surrounding the Snowy River estuary. The walk provides elevated views of the estuary, river mouth and the sweep of coastline to Point Ricardo in the east. The numerous boardwalk sections provide excellent vantage points to observe birdlife. The walk is a total of 5.1 km, takes around 1 hour 40 minutes one way, and can be accessed from a number of points  between Jorgensen Street and Mills Street, with car parking at Sampsons Lookout. It can also be accessed via the Mots Beach Picnic Area car park or via the steps from the Frenches Narrows car park. Check out http://parkweb.vic.gov.au/explore/parks/marlo-coastal-reserve/things-to-do/snowy-river-estuary-walk for details.

Cape Conran Coastal Park
Cape Conran Coastal Park covers a total of 11,700 ha of coastal wilderness from Point Ricardo to Sydenham Inlet. It is an ideal destination for walkers featuring an attractive rocky peninsula which has a pleasant 2.5 km clifftop walk and pristine beaches which are ideal for swimming, fishing, diving and boating. The easiest access is via the coastal road at Marlo which heads east to Cape Conran. The road passes superb lookouts over the Snowy River mouth and the ocean coastline. The walks in the park include:
* Pearl Point (25 km return) which includes sedimentary rock formations, sand dunes, seabirds and marine wildlife. It can be a difficult walk as the beaches have soft sand.
* Dock Inlet (14 km) which is around the freshwater lake which is fed by Dock Creek. There is a diverse range of waterfowl in the wetlands and white-bellied sea eagles are often seen in the area.
* Yeerung River and Estuary (1.5 km) is a pleasant walk notable for the birdlife and the flora and fauna of the area.
* Yeerung Gorge - 600 metres - The Yeerung River Road links the East Cape with the Yeerung River mouth where there are picnic facilities, good fishing spots and a walking trail to the Yeerung Gorge.
* Heathland Walk (1 km) - is ideal for wildlife with birdlife (rosellas are common). Lizards and goannas are common near Cape Conran.
* East Cape Boardwalk - 600 metres - At Cape Conran, a mixture of rocky and sandy beaches exist and the West Cape offers scenic views at the Salmon Rocks lookout. It has interesting indigenous signage along the boardwalk.
* Nature Trail (1.5 km) - The East Cape has similar features but also includes a scenic coastal boardwalk. There is an excellent, downloadable brochure (complete with maps) which can be accessed at http://parkweb.vic.gov.au/__data/assets/pdf_file/0005/314528/Park-note-Cape-Conran-Coastal-Park.pdf.

The Road from Orbost to Marlo
The road from Orbost to Marlo follows the Snowy River and passes a number of excellent locations beside the river where you can set up camp, have a picnic or just relax and do a bit of fishing. There is also, on the far side of the river, an unusual area of warm temperate rainforest with vines, lianas and lilly pilly trees which is home to bell-birds and thornbills. Notice how rich the river flats are. The Snowy has been known to flood three times a year and the soils are fertile and ideal for dairy grazing.

* Prior to the arrival of Europeans the area around Marlo was occupied by the Kurnai Aboriginal people.

* Despite the difficulty of vessels navigating the sandbar, Marlo became an important port between the 1850s and the 1880s.

* By 1845 Norman McLeod had occupied land in the Snowy River valley near where the town now stands.

* By 1854 wattle bark was being stripped from trees in the valley and exported to Europe for use in tanneries.

* The first settler where the town now stands was James Stirling who took up land and built a bark hut in 1875.

* By 1880 paddle steamers, schooners and ketches plied the lower reaches of the Snowy River and the produce of the valley was carried by sea to Melbourne. In this year the Snowy River Shipping Company was formed.

* In 1886 the Marlo Hotel was opened for business.

* 1889 saw Marlo officially declared a town and during that year the town was surveyed.

* In 1893 the town's first telephone was installed at the Marlo Hotel.

* In 1910 the local post office opened for business in Willis Avenue.

* By 1915 shipping to Marlo had officially stopped.

* Today Marlo is a popular holiday resort, particularly for anglers.

There is a useful local website with information about Accommodation in the area. Check out http://marlo.vic.au. 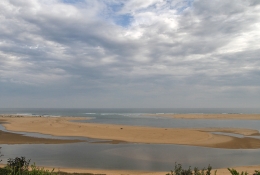 The mouth of the Snowy River at Marlo 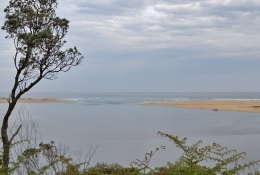 The view from Marine Parade across towards the mouth of the Snowy River. 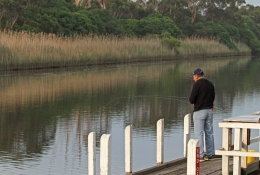 Fishing in the Brodribb River neear where the PS Curlip is moored. 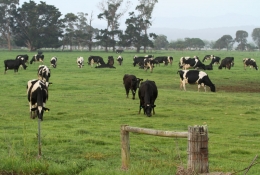 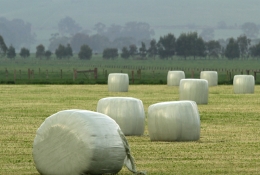 Hay bales beside the road between Orbost and Marlo.