Maroochydore is a typical Sunshine Coast holiday destination with high-rise blocks of flats and apartments, shopping malls and new developments mixed with housing from the 1970s which stretches 20 km down the coast to Caloundra. It is the geographical and commercial heart of the Sunshine Coast and a perfect holiday destination with kilometres of golden beaches as well as fishing, boating and other aquatic possibilities, shopping centres geared to the tourists, some small industrial development in the hinterland, a superb coastal walk all the way from Sunshine Plaza to Cotton Tree, and a sense of holidays in the air all year round. The town is located at the estuary of the Maroochy River where pleasant riverside parks and picnic areas mix with surf beaches and the sands of the Maroochy estuary.

Maroochydore is located 105 km north of Brisbane via the M1 and Mooloolaba.

There are a number of possible explanations for Maroochydore. All are based around the black swans which can be seen in the area. Some interpretations explain that the word is an English equivalent of the local Aboriginal word "marutchi" meaning "black swan" or "marutchi dora" meaning "water where the black swan lives". Alternatively the word possibly comes from the Yuggera language, "muru-kutchi" meaning red-bill, the name of the black swan. The Yuggera people lived around Brisbane. The name was given to the area by Andrew Petrie in 1842. Petrie was accompanied by two Yuggera men from whom, presumably, he obtained the name. The name Maroochydore came into general use in 1884.

The Maroochy River
The section of the mouth of the Maroochy River which extends from the Sunshine Motorway bridge along the river bank to Cotton Tree is a near-perfect place for children to play in shallow water, families to have picnics and barbecues, and walkers to stroll in a charming sub-tropical setting and watch the myriad of water sports which define this piece of safe water. These are calm waters for boating, waterskiing and fishing. A boat ramp is located on the southern riverbank, just west of the Sunshine Motorway, and another is nearby, on Eudlo Creek, in Lions Park. This is more than just a walk. There is the impressive War Memorial in the park, an excellent play area for children and, most impressively, a huge snake mural (One Earth, One Spirit - created for World Environment Day 1992 A contemporary dreaming by Joanne Currie, Elli Schlunke and Keeleen Hunter) which is on the wall of the Cotton Tree Aquatic Centre.

Alexandra Headland
Located south of Maroochydore is a beach which is partially edged by a narrow rock platform known as Alexandra Headland. The coastal strip, often called Alex as in Alex Surf Supporters Club, is part of a beach development which continues until it reaches the narrow strip of land which lies between the beach and the Mooloolah River. There is a rock wall which juts out at the western edge of the mouth of the river. Across the water can be seen Point Cartwright and the Point Cartwright Lighthouse.

Mooloolaba
To the south of Maroochydore, and now part of a continuous urban development along the coast, is Mooloolaba which lies to the north of the mouth of the Mooloolah River, just south of Alexandra Headland. The inlet to the river is narrow, edged by Mooloolaba Beach and Point Cartwright.

Point Cartwright
At the mouth of the Mooloolah River are Point Cartwright and Beacon Lighthouse Reserve. This scenic reserve offers excellent views over the coast and the boat harbour. Dolphins, whales and turtles can sometimes be seen offshore.

Point Cartwright Lighthouse
The elegant and modern Point Cartwright Lighthouse was erected in 1978. It was constructed of reinforced concrete topped by a precast concrete lantern room. It has an elevation of 53 metrees, has never been manned and has a range of 23 nautical miles. It is serviced every four months by the Australian Maritime Safety Authority. It was built to replace the lighthouse at Caloundra.

Sealife
Previously known as Underwater World, Sealife is located off Parkyn Parade near The Wharf complex and on the banks of the Mooloolah River. This extensive theme park boasts sixteen themed zones including - Tidal Touchpools, a Seahorse Sanctuary, a coastal wreck, an oceanarium, Seal Island, Jellyfish Kingdom, Octonauts, Billabongs and Shipwreck shores. Sealife contains over 10,000 creatures including thirty species of sharks and stingrays. For more information check out https://www.underwaterworld.com.au or tel: (07) 5458 6226.

The Sunshine Castle at Bli Bli
This recreated Norman-style castle comes complete with drawbridge and moat, dungeon, torture chamber, dioramas depicting medieval life and fairy stories, period settings, medieval armour and a modest museum. Over the years it has changed. Originally built in 1972 the Castle has had three freehold owners. First opened by a Scotsman for his wife's dolls and fairytales as the Fairytale Castle. It has also been known as the Bli Bli Castle. Since 2006 the Castle has had a transformation and now offers a medieval museum experience with only some of the dolls and fairytales still in action. It is located at 292-296 David Low Way, Bli Bli and is open from 9.30 am to 4.30 pm. For more information check out http://www.sunshinecastle.com.

* Prior to the arrival of Europeans the area along the coast near Maroochydore was home to the Gubi Gubi Aboriginal people.

* The first European in the area was the Irish convict John Graham who, having been sentenced to seven years transportation for stealing hemp, was sent to Moreton Bay. In July 1826, believing he could row to China, Graham escaped from Moreton Bay. He walked into an Aboriginal camp near the present site of Maroochydore and was immediately accepted as the ghost of one woman's dead husband. Graham lived with the Aborigines for six years.

* In 1833 Graham returned to Moreton Bay and gave himself up.

* Timber-getters were in the area by the early 1850s. They cut timber in the hinterland.

* A depot handling timber was established on the river by 1856.

* The explorer Andrew Petrie passed through the area in 1862 and named the Maroochy River.

* William Pettigrew opened a sawmill on the Maroochy River in 1891.

* The township of Maroochydore came into existence in 1900.

* In 1907 Thomas O'Connor subdivided land near the river mouth and sold allotments.

* A School of Arts and the local Surf Life Saving Club were both operating by 1916.

* During the 1920s the Maroochydore Picture Palace and Jazzland was opened.

* It wasn't until the 1960s that the area developed as a major tourist destination.

The University of Queensland site has detailed information on the history of the area - http://queenslandplaces.com.au/maroochydore. 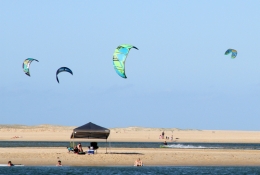 Looking across at the sand bank in the mouth of the Maroochy River. 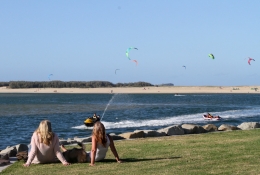 Watching the water sports on the Maroochy River. 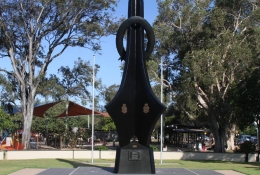 The impressive war memorial in the park between Bradman Avenue and the Maroochy River. 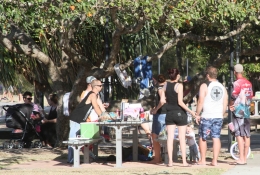 Picnics beside the Maroochy River. 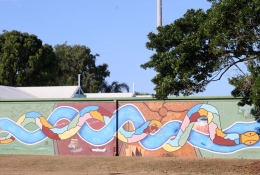 The One Earth, One Spirit mural on the wall of the Cotton Tree Aquatic Centre. 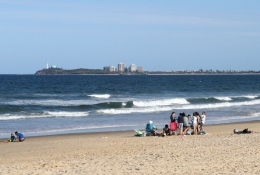 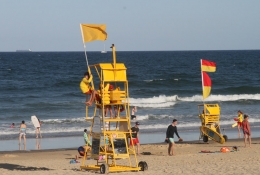 Lifesaving duties on Maroochy Beach in the late afternoon.