Marree is a fascinating historic watering hole and railway town on the edge of the vast desert area of Central Australia. To the north lie the Simpson Desert and Sturt's Stony Desert and to the north-east is the Strzelecki Desert. The vast saltpan, Lake Eyre, lies to the northwest.  Marree is a true desert settlement receiving an average annual rainfall of only 125 mm.

Marree is located 657 km north of Adelaide via RM Williams Way. It is only 49 m above sea level and lies at the southern end of the famous Birdsville Track.

When the Afghan camel driver's camp at Hergott Springs was gazetted in 1883 it was renamed Marree, a word supposedly corrupted from "mara", an Arabunna Aboriginal word meaning "place of possums" - which is strange because the district is not known for its possums.

Museum Park
In Museum Park, in the centre of town beside the old railway line and across the road from the Marree Hotel, are a few pieces of historic machinery. The most famous is the old Royal Mail truck which Tom Kruse used to transport mail and supplies from Marree to Birdsville along the Birdsville Track. Kruse's story was memorably captured in the 1952 documentary Back of Beyond which recorded the hardships and ingenuity involved in taking mail and supplies across a desert prone to flooding, being bogged in sand dunes and breaking down hundreds of kilometres from any assistance. Interestingly the old truck has E. G. Kruse on the side and no one in town seems to know where the name 'Tom' came from. There is an extract from the documentary which can be watched on YouTube at https://www.youtube.com/watch?v=NSa4esN3CHM. Well worth checking out.
On the north-eastern side of town there is a plaque dedicated to the "memory of the mail contractors of the Birdsville Track. 1886-1975. The real pioneers."

Driving Around the Town
Part of the experience of Marree, which is now no more than a few ancient buildings on the edge of the desert, is to feel the extraordinary loneliness and isolation of the town. There are derelict old corrugated iron houses and wide streets disappearing into the desert which encroaches on every side.
The settlement today still recalls the poem 'Marree' which opened:
Oh the corrugated-iron town
In the corrugated-iron air
Where the shimmering heat-waves glare
To the red-hot iron plain
And the steel mirage beyond

The Replica Mosque
The Afghan camel drivers who settled in Marree were Muslims who built a mosque from tree stumps in 1861. It faced Mecca and was claimed as the first mosque in Australia. In recent times a reconstructed "bough shed" mosque has been constructed in centre of town to commemorate the town's historic building.

Marree Man
The Marree Man, which can only be seen from the air (and you can organise a flight at the Marree Hotel) is a geoglyph which lies on a plateau of arid land, approximately 60 km west of Marree. It was first spotted by a local charter pilot in 1998. By any measure it is huge - it is 4.2 km tall and at the time of discovery, the outline was 30 cm deep and up to 35 m wide. No one knows who was responsible or how this giant figure, which depicts a naked Aboriginal male holding a spear, was created. Some "experts" have suggested that the figure had to be created with a bulldozer because the outline is 30 cm deep and 35 m wide - it is so large that it can, reputedly, be seen from space. By the time people actually got to the site they could not detect any footprints or tyre marks and there was only a single track leading to the edge of the figure.
There is an excellent, and very detailed, account of the strange geoglyph at https://www.ancient-origins.net/unexplained-phenomena/mysterious-marree-man-outback-australia-largest-geoglyph-world-003642 which notes "The giant geoglyph of the Marree Man was quick to become an icon of the small South Australian township and a popular tourist destination, but the famous carving can now barely be seen. While the site has never been accessible to the general public as it falls on Native title lands, the geoglyph is slowly fading through natural erosion. It is only a matter of time before the famous figure disappears forever, taking the secrets of its creation along with it."

Lake Eyre now known as Kati Thanda
Located to the north of Marree is Lake Eyre, Australia's most famous inland lake. It is located in an area which receives an annual rainfall of less than 125 mm per annum and yet it drains an area of central and north-eastern Australia which covers about 1.3 million sq km - or one sixth of the continent.
The first European to see Lake Eyre was the explorer Edward John Eyre who reached Lake Eyre South in 1840. He thought it was part of Lake Torrens. The surveyor, G. W. Goyder, who mapped the area in 1860, named the lake after the explorer.
The lake commonly records temperatures in excess of 50°C in summer and has been known to reach the extraordinary temperature of 61°C. It is actually divided into two - Lake Eyre North and Lake Eyre South - by the 13 km Goyder Channel. There is evidence that since Europeans first sighted the lake in 1840 it has filled only seven times: in 1886-1887, 1889-1890, 1916-1917, 1950, 1974-76, 1990, 2009-2011. Locals dispute this, arguing that there is a huge difference between the lake being full and water being visible in the lake. Much of the lake lies below sea level. Between 2009-2011 the inland rivers feeding the lake combined with local downpours (the remnants of Cyclone Yasi dumped 130 millimetres into the lake in a matter of hours) poured millions of litres into the lake.
There is evidence that it was three times its current size (it really was Sturt's mysterious inland sea) about 30-40 000 years ago. Much of it lies below sea level and it is estimated that it has salt deposits exceeding 500 million tonnes.
Lake Eyre North lies 90 km north of Marree and the Oodnadatta Track passes close to Lake Eyre South at a number of points. The lake achieved modern fame in 1964 when Sir Donald Campbell set a world land speed record of 645 km/h on it in his famous jet propelled 'Bluebird'.
The best way to visit Lake Eyre (on land) is to take a tour from Marree with Reg Dodd. See http://www.arabunnatours.com.au for details.

Arabunna Tours With Reg Dodd
Reg Dodd is a genuinely fascinating Aboriginal elder from the Arabunna - the indigenous people of the Lake Eyre region. Reg’s tours, which leave from Marree, include opportunities to explore and learn about local Aboriginal culture, tradition, sacred sites and rock arts as well as trips to the edge of Lake Eyre - this is special as the edge of the lake, while off the Oodnadatta Track, needs expert local knowledge to reach the shore. The Arabunna Tours website explains: "While travelling along the legendary Oodanadatta Track explore the ancient, natural wonders of the Lake Eyre Basin while sampling bush tucker and discovering bush medicines and other desert resources. Enjoy the tastes of cooking on ashes, camp oven cooking and billy tea and damper. Hear stories around the campfire about the old Ghan railway, the Overland Telegraph, the Afghans, the missions and the mines." See http://www.arabunnatours.com.au for details.

Joy Flights
There are a couple of "joy" flights out of Marree across Lake Eyre and to the plateau where Marree Man is depicted. Check out http://www.marree.com.au/Tours/tours.html for details about Marree Hotel Joy Flights and Oasis Cafe Joy Flights.

Birdsville Track
The road to Birdsville heads directly north from Marree for 519 km across the unforgiving harshness of the Simpson Desert and Sturt's Stony Desert. It was developed in the 1880s as a stock route and, in recent times, has become popular with 4WD enthusiasts. Some cynics have suggested that there are now far too many vehicles on it in the winter months and the road, once one of the great and lonely outback challenges, is now almost like a dirt road highway.

* Prior to the arrival of Europeans the country was home to the Arabunna Aboriginal people.

* The area around Marree was first explored by Europeans in 1840 when Edward John Eyre travelled north from Spencer Gulf and reached the southern shores of Lake Eyre.

* In 1859 John McDouall Stuart entered the area and it was his assistant Herrgott who discovered the mound springs after which the early town took its name.

* Hergott Springs camp was established in 1872 for the maintenance workers on the Overland Telegraph Line.

* By the mid-1870s the camp was an outpost for all expeditions heading north.

* Around that time Afghan camel drivers established a base at the settlement from which they headed to Oodnadatta, Birdsville and Alice Springs.

* In the 1880s the Birdsville Track from Marree to Birdsville was developed.

* In 1882 a general store and hotel were opened at Hergott Springs.

* The Afghan camp became an official town in 1883 when the railway reached it. That year saw the opening of a police station and a post office.

* The town continued to be called Hergott Springs until 1918 when, with anti-German feeling still running strong after World War I, the railway station sign and the post office were both changed to Marree.

* Camels continued to be used out of Marree until 1949.

* In 1952 a famous documentary Back of Beyond put Marree and its postman, Tom Kruse into the minds of many Australians.

* The town's demise occurred in 1980 when the railway was closed.

* In 2012 the Arabunna were granted Native Title over Lake Eyre. It is now known as Kati Thanda-Lake Eyre.

There is a very simple and useful local website. Check out http://www.marree.com.au. 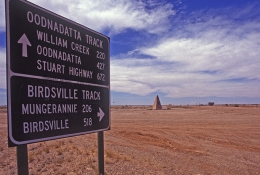 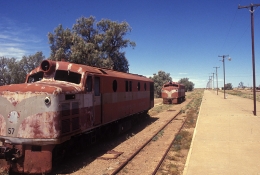 The old Ghan engines beside the railway station in Marree 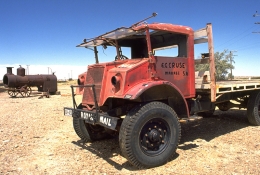 The famous Royal Mail truck which Tom Kruse used to take the mail from Marree to Birdsville. 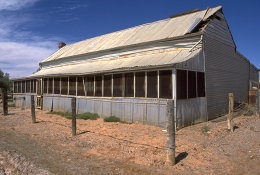 Memorial to the Mail Contractors on the edge of town 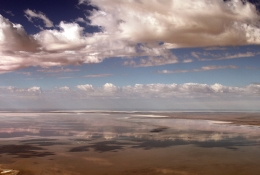 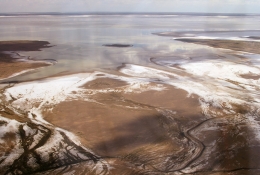 The edge of Lake Eyre 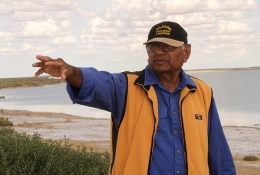