Popular resort town recovering after being devastated by bushfires in 2009.

There is something miraculous about Marysville. On 7 February, 2009 it was at the heart of one of the worst bushfires in Victorian history. Most of the town and the surrounding bush was destroyed. Forty-five local residents died in the fires and it was estimated that nearly 90% of the town's buildings - including the police station and the primary school - were destroyed. Yet four years later, while many of the trees are still blackened, the town has recovered. It looks modern and chic. The eucalypts are green with new shoots and the most obvious evidence of the devastation is the photographs which recall the day the town was destroyed. Marysville survives because of human tenacity, because it is a popular tourist destination and because it is beautifully located in a picturesque valley surrounded by heavily timbered mountains. The air is fresh and bracing and it is especially attractive when the flowers bloom in spring and the trees shed their leaves in autumn.

Marysville is located 98 km north-east of Melbourne via Healesville and the Maroondah Highway.

In 1863-64 John Steavenson, who at the time was the Assistant Commissioner for Roads and Bridges, established his headquarters in the valley while surveying and overseeing the construction of roads to the new goldfields. He named the campsite after his wife Mary.

Bruno's Art and Sculpture Garden
If you want to understand just exactly what the 2009 bushfire did to the town - and how the bushland has regenerated - there is no better place than Bruno's Art & Sculpture Garden. Bruno recorded the decimation of the fire. Fortunately many of his sculptures, which had been fired at high temperatures, survived the blaze but the surrounding rainforest was destroyed. Today it is possible to walk through the gardens and be amazed at the resilience of the bush and the sculptures. Bruno's style is realistic and he happily admits that his work is a mixture of "art, humour, beauty and fantasy". Take it on this level, think in terms of William Ricketts in the Dandenong Ranges, and you will be amazed and amused. Located at  51 Falls Rd, Bruno's is a collection of terracotta sculptures in a beautiful garden setting which is open from 10.00am - 5.00pm each day. For the full story check out http://www.brunosart.com/

Marysville & District Historical Society Museum
Located at 39 Darwin Street, the Marysville & District Historical Society Museum had to be relocated after the 2009 fires in which it was totally destroyed. The museum describes its exhibitions as "displays that follow the pattern of the story of pioneers, timber, tourism and Marysville in gernal with a photographic display, an art gallery, a Manical Mechanicals shop, a dentist's chair, a bottle collection and an exhibition of the events of Black Saturday 2009."

Forest Trails around Marysville
There are currently seven outstanding walking tracks surrounding Marysville. Many are old timber tramways which were used to haul mountain ash to the timber mills. A comprehensive and detailed guide can be downloaded at http://www.marysvilletourism.com/wp-content/uploads/marysville-trails-mobile.pdf

1.  Steavenson Falls
As early as 1866 Steavenson Falls, named after John Steavenson who surveyed and named the town, had become a tourist attraction. A 3 km track from the town to the falls was cut in that year and the falls - recognised as the tallest falls in the state because they drop 84 metres in three stages - were a popular day trip from the town. There is a large car park and two walks to the falls - the "top of the falls lookout" which is 800 m one way, takes 15-30 minutes and is steep; the Steavenson Falls Walk which is 700 m return, is flat and takes 15-30 minutes (this is the direct walk to the falls). The falls and the path from the carpark are floodlit until 11.00 pm each evening. The possums are accustomed to being hand-fed at night.

2. Beauty Spot
An easy nature trail which follows the winding Leary Creek. It is noted for its tree fern groves and abundant bird life. It starts at Kings Road, Beauty Spot Car Park, is a 1.5 km loop and takes 40 minutes. There is a shorter route which is only 500 m and takes around 10 minutes.

3. Gilberts Gully
A gentle walk accessible from the centre of Marysville, this trail passes through forest and crosses a wetland on boardwalks and steel bridges. It starts at Barton Avenue is a 2.2 km loop and takes 30-45 minutes.

4. Tree Fern Gully
The Tree Fern Gully Track starts at Gallipoli Park in Murchison Street and links Marysville to Steavenson Falls. It is 3.4 km one way, has gentle hills on a formed track and takes 60-90 minutes. It passes through Manna Gum, Mountain Ash and tree fern groves.

5. Michaeldene Trail
The Michaeldene Trail (either 2.7 km or 4.3 km loop) is an opportunity to experience Marysville's timber cutting past. It takes in a natural spring known as the Wishing Well, the remains of a trestle bridge and timber tramway, and footbridges across the Dickinson and Taggerty Rivers. There is a 50 m diversion to the Taggerty River Lookout.

6. Wilks Creek Trail
An energetic walking and cycle trail which passes Anderson No. 1 Mill and shares a short distance with the famous Bicentennial National Trail, a 5330 km horse trail linking Healesville with Cooktown in Queensland. It is a 6.1 km return loop which takes 90 minutes to 2 hours.

Cumberland Scenic Reserve and The Big Tree
The Cumberland Scenic Reserve of more than 300 hectares protects a valuable stand of mountain ash, and includes The Big Tree, which is said to be the tallest living tree known in Victoria. It is located 16 km east of Marysville on the Woods Point Rd. There is a 4 km loop track which includes remains of the Cambarville sawmill and associated township, which were largely destroyed by fire in 1970, Cora-Lyn Falls, Cumberland Falls, Barton's Lookout, The Big Culvert (a granite arch built c.1880), an old water race built by goldminers around 1870 to transport water to the Sovereign Mine on the Reefton Spur, Sovereign View (offering excellent views over Armstrong Creek Valley towards Warburton), and the Big Tree. The latter was the tallest living tree in the state until the top broke off in winds in 1959. It dates from 1750 before Europeans settled the east coast of Australia. It was reduced from 92 m to 81.5 m. It still has a circumference of 5.2 metres near the base. For more details read Brett M. Mifsud's Victoria's Tallest Trees. It exists as a PDF on the internet.

Lady Talbot Trails
It is accepted that the Lady Talbot Drive (46 km) offers the best rainforest walks around Marysville. It starts at Woods Point Road, follow the Taggerty River valley and climbs the slopes of Lake Mountain to the top of Mount Margaret Gap. The road is suitable for 2WD vehicles in dry weather.

* Beeches Rainforest Walk
Beeches Rainforest Walk (4 km loop, 2 hours) takes in the confluence of the Taggerty River and Whitehouse Creek and a stand of Mountain Ash - the second-largest tree species in the world - as well there is ancient rainforest with stands of moss and fern-covered Myrtle Beech, many of which are more than 300 years old; Southern Sassafras, Blackwood and tall tree ferns. Watch out for the lyrebirds which are common in this area.

* Taggerty Cascades
Fed by the waters from Lake Mountain the Taggerty River tumbles over large granite boulders and through pockets of rainforest. A winding path descends towards the cascades and crosses a timber bridge. Lyrebirds are common in the area. The path is only 150 m return. Time: 20 minutes. This is part of the Beeches Rainforest Walk.

* Keppel Falls
This is a vigorous upstream walk (2 km return - 45 minutes) along Taggerty River to the viewing decks over the tiered Keppel Falls which were named after the Keppel brothers who settled here in the 1880s. The falls drain the southern slopes of Mount Margaret and are particularly impressive in the spring when the winter snows melt.

Lake Mountain
Lake Mountain (1530 m) is 21 km east of Marysville. (1) The Lake Mountain Alpine Resort - has 30 km of cross-country trails which are groomed daily and cater to every level of skill, as well as seven toboggan runs. In summer the Green Again (4 km, 1.5 hours) walking track from the resort leads through snow-gum woodlands, open heaths and mountain wildflowers. Since 2009 it has been a fascinating study of how a eucalypt region regenerates after bushfires. For more information check out http://lakemountainresort.com.au (2) The Summit Loop Walking Track - The Visitor Centre car park is the starting point for the Summit Walk Loop Track (5 km) which includes four lookouts, stands of snow gums and Alpine Ash, Alpine heath and Alpine bogs. The track climbs steeply for 200 m but soon levels out. From the main track there are side tracks to Marysville Lookout, the Alps Lookout, Sherlocks Lookout and Taggerty Lookout. There is a PDF of the route - http://lakemountainresort.com.au/wp-content/uploads/2010/12/Summit-walk-2010.pdf.

Cathedral Range State Park
Cathedral Range State Park (3577 ha) was severely damaged by the 2009 bushfires with 92% of the park being burnt. The park recovered rapidly and is now popular with visitors keen on walking, rock climbing and camping. Cathedral Range is a 7 km-long mountain ridge featuring a number of impressive peaks, abundant vegetation including orchids and native fauna such as satin bower birds. There are fifteen walking tracks in the park which can be combined to form larger circuits. One of the major walks is between Sugarloaf Peak (920 m) and Cathedral Peak (840 m) along the Razorback Ridge. There is a downloadable brochure complete with maps and comprehensive directions for the various walks. Check out http://parkweb.vic.gov.au/__data/assets/pdf_file/0019/314533/Park-note-Cathedral-Range-State-Park.pdf

Narbethong
Narbethong (reputedly an Aboriginal word meaning "cheery place") came into existence in the early 1860s when an inn was built at the base of Black Spur. Surveyed in 1865 it was initially a stopover on the rugged tracks to the goldrush settlements of Woods Point and Walhalla. After the goldrush it became a farming, timber getting and holidaying area. One of the early guesthouses, the Hermitage, was built in 1894 by the photographer, J.W. Lindt. Classified by the National Trust, it once played host to Dame Nellie Melba. Baron Ferdinand Von Mueller, who established Melbourne's Botanic Gardens, helped set up the Hermitage's gardens. There are a number of scenic areas around town. Signs along Andersons Lane point to boardwalks over the Murrindindi River Cascades and to the Wilhelmina Falls. There is also an excellent Tanglefoot Track in Toolangi State Forest.

* Prior to European settlement the area around Marysville was occupied by the Taungurung clans of Aboriginal peoples.

* In the early 1860s a settlement, subsequently called Marysville, was used as a camp site for diggers and prospectors walking  the Yarra Track to the Jordan goldfield. Around this time a general store run by the Barton Brothers, a bakery and butchery appeared to meet the miner's supply needs. The Bartons were entrepreneurial. They established a packhorse delivery service to the goldfields.

* 1865 saw the first land sales, the appointment of a postmaster and timber cutters arrive to cut down trees described as "The Tallest Trees in the British Empire".

* The railway reached Healesville in 1889 and people from Melbourne began arriving for holidays and honeymoons.  Guest houses were established and bushwalks became a popular activity.

* By 1914 gold mining had ceased in the district and tourism had become the heart of the local economy.

* By the 1920s the town had twelve guesthouses and an hotel.

* The Acheron Tourist Road joined Marysville with Healesville in 1929. Around this time Barton Brothers established the town's first automobile garage.

* On 7 February, 2009 the town was virtually destroyed by bushfires. For more details check out http://www.marysvilletourism.com/about/history/ 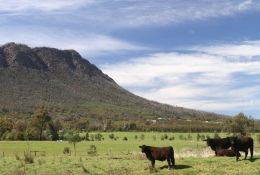 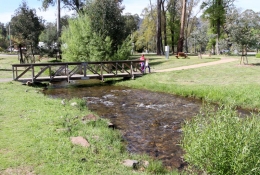 The bridge across the Steavenson River at the entrance to Marysville. 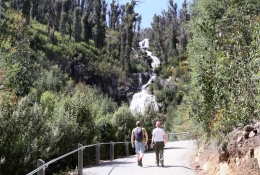 The Steavenson Falls in 2013 after the 2009 bushfires. Note how the trees have grown back. 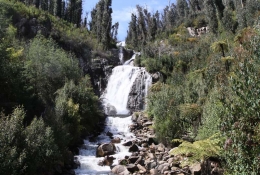 The Steavenson Falls from the bridge across the river. 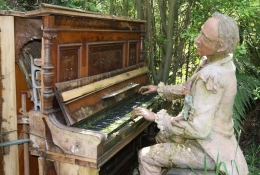 The piano player, one of the survivors of the 2009 bushfires, at Bruno's Art and Sculpture Garden. 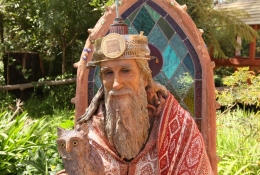 The sculpture of St Bruno in the gardens at Bruno's Art and Sculpture Garden.