Mineral springs and home of the famous 'never-never'.

There are two good reasons for exploring Mataranka: it is a place where you can swim in hot springs all year round and, for those old enough to remember, it is the location of the Australian classic novel We of the Never-Never. The book's title is remarkably apt. This is Gulf Savannah country - country which was so perfectly described by the playwright Sumner Locke Elliott as "this lonely strip of barren and seemingly endless sandy waste of ant-hills and stunted trees - thick, hot red sand in the winter time and a sea of mud during the dreaded 'Wet''". The town, spread along the Stuart Highway, is nothing more than a stopover for those people driving up and down the highway. It comprises a roadhouse, police station, petrol station, cafe, restaurant, pub and general store.

It is probable that the word "mataranka" means "home of the snake" in the language of the local Yangman Aboriginal people.

Understanding Tindall Limestone and the Hot Springs
There is an excellent Water Resources report on the area titled Surface and Groundwater Interaction the Mataranka Area from the Department of Natural Resources. (http://www.nretas.nt.gov.au/__data/assets/pdf_file/0008/19358/marantakareport_WRD08017_SAF.pdf.) It explains, in great detail, the geology of the entire area and the specific geology and hydrology of the hot springs around Mataranka. You can download it or this is a distillation which removes a lot of the technical terms.

Springs – Rainbow, Bitter, Fig Tree Springs and other unnamed springs along Elsey Creek, Salt Creek, Roper Creek, and the Roper River. The springs in the Roper start from the upstream junction of Waterhouse River and Roper Creek (which join to become the Roper River) and extend east to the edge of the limestone basin. Spring hydrochemistry is not homogeneous indicating that individual spring drain different groundwater systems. Six large karstic springs are located in the Mataranka area.

Rainbow Spring and Bitter Spring flow from large solution openings connected with the underground karst system while springs located in the Roper River bed and Elsey Creek bed emerge from smaller cavities and fractures developed in the underlying limestone. Fig Tree Spring flows from an extensive tufa wall formed along a 20 km stretch of the Roper River between Salt Creek and Roper Creek."

The report describes the following (this has been modified with some of the technical language removed):

Bitter Springs
"Bitter Spring is located north-east of Mataranka Town. It is the biggest karstic springs in the Mataranka region with a flow of 0.74 cubic metres per second on 01/11/2006. The water type is classified as Na-Ca-Mg-HCO3-Cl with TDS (total dissolved solids) between 870-900mg/L, pH = 7 (sampling 2003/2004). The bitter taste can be explained by the presence of epsomite - epsom salts and mirabilite – glauber salts. These form under low humidity conditions (dry season) in water rich in magnesium (Mg), sodium (Na) and sulphate (SO4). The slight odour of rotten eggs, frequently detected while swimming in Bitter Spring, is connected with biological processes that reduce sulphate. During this process small amounts of hydrogen sulphide gas are produced. The elevated TDS (total dissolved solids) in Bitter Spring compared to that in Rainbow Spring is explained by the stronger influence of Georgina Basin groundwater in Bitter Spring. This is also connected with the local geological structure. Basalt underlain limestone comes close to the surface in this area forming a natural ridge which favours groundwater flow from the south. In terms of water quality data, the Mataranka area is influenced by groundwater originating from the Georgina Basin (Anthony Lagoon Beds) and groundwater from the Daly Basin. Bitter Spring and Rainbow Spring are in the mixing zone of both basins with water quality in the former dominated by the influence of the Georgina Basin and water quality in the latter characteristic of a mix of both the Georgina and Daly Basins."

If you are interested in the geology of the area, these are very brief extracts from a longer and very detailed and technical account titled Surface and Groundwater Interaction the Mataranka Area. Check out http://www.nretas.nt.gov.au/__data/assets/pdf_file/0008/19358/marantakareport_WRD08017_SAF.pdf.

Elsey National Park and Bitter Springs
It is strange how, today, this whole area is so accessible and how, during the winter months, it attracts literally hundreds of tourists from all over the world. Writing about the land as she found it in 1902 Jeannie Gunn recorded Elsey Station as "this tiny homestead of a million and a quarter acres, with the Katherine settlement a hundred miles to the north of it, one neighbour ninety miles to the east, another, a hundred and five to the south, and others about two hundred to the west." It really was the Never-Never, a land of incredible isolation. Today much of the old property is part of the Elsey National Park and Bitter Springs, a remarkable tropical spring-fed and mineral-rich thermal pool is only 2 km from Mataranka. Visitors can take a short walk from the car park, pass through palm trees, and reach the Bitter Springs swimming area. There is a short, 500 m walk around the pool (20 minutes, easy) with informative signage. The pool remains at a constant 34°C all year. It is located on the Little Roper River. Check out and download http://www.parksandwildlife.nt.gov.au/__data/assets/pdf_file/0010/3142/ElseyNPFS11.pdf.

Mataranka Homestead Tourist Resort
By the 1970s there were large numbers of travellers (mostly babyboomers who had read We of the Never-Never at school or seen the 1982 movie) visiting Mataranka and wanting to discover Jeannie Gunn's "never-never". The Mataranka Homestead Tourist Resort (see http://www.matarankahomestead.com.au for prices and details) recognised that the original homestead had long been destroyed and, with a fine sense of commercialism, purchased and rebuilt the replica of Elsey Homestead which had been used in the film of We of the Never-Never. The concept of the 'never-never' was a term used to describe hardship and loneliness of the extreme outback of the country. The Tourist Resort, which has nearly 100 powered caravan and camping sites as well as ten cabins and 23 motel rooms, is the setting for the much photographed Rainbow Spring and Thermal Pool.

Elsey Homestead Replica
Located in the grounds of the Mataranka Homestead Tourist Resort, the Elsey Homestead replica has an excellent sign outside which explains its origins: "This area was home to Aeneas Gunn and his young bride Jeannie, who arrived here in 1902 to live and work on Elsey Station. Aeneas, the 'Maluka', died of malarial dysentery on 16 March 1903 and Jeannie left Elsey and returned south, but the Territory remained with her. She wrote of her experiences in the wilderness of Australia's 'Never Never' and of her time on Elsey Station in the 1908 book We of the Never Never, which became, and still is, an Australian classic.
"Elsey Station consisted of a homestead, kitchen, meathouse, quarters, blacksmith shop, wagon shed and harness room, yards and a cemetery and was located south of Mataranka. It was later moved and re-erected at a new site north-east of there.
"Over the years the old Elsey Homestead has become a part of the legend of living in the harsh Australian bush, many miles from the nearest European settlement. In 1981 a replica of the Homestead was constructed for the movie We of the Never Never. The construction was based on research by archaeologists, historians and architects and following the movie's completion the replica was moved to this location."

Stan Martin Park
Located in the town of Mataranka, the Stan Martin Park has a series of sculptures of life size characters from We of the Never Never. They are located through the park.

Never Never Museum
Located in the centre of Mataranka, the museum's displays include a history of the local First Nation people, information about the North Australia Railway and the Overland Telegraph, and the role the played in the defence of Australia during World War II. The museum is open from 9.00 am - 4.00 pm Monday to Friday, tel: (08) 8975 4576 or check https://ropergulf.nt.gov.au/our-communities/mataranka/never-never-museum-mataranka. The keys are held at the Rural Transaction Centre.

Rainbow Spring and Thermal Pool
Located in Elsey National Park south of Mataranka (take the Homestead Road to the east - it is 1.5 km south of the town on the Stuart Highway) the Rainbow Spring and Thermal Pool has become one of the major attractions in the area. The spring water rises from underground at 30.5 million litres per day and at a temperature of 34°C. The pool is located amidst paperbark eucalypts and Livistona palm trees and is a popular swimming pool.

Elsey Cemetery and National Reserve
Located 21 km south of Mataranka and clearly signposted off the Stuart Highway is the Elsey Cemetery and National Reserve which contains the grave of Aeneas James Gunn "The Maluka" who died on 16 March 1902 of malarial dysentery only 13 months after he arrived in the area. Next to his grave is a memorial to his wife, Jeannie, which reads "In loving Memory of the 'Little Missus''. Born June 5th 1870. Died June 9th 1961." She died in the suburb of Hawthorn in Melbourne having outlived her husband by nearly 49 years. During World War II the military forces stationed at Mataranka relocated the remains of some of the characters mentioned in We of the Never-Never to the cemetery. The original site of the Elsey Station Homestead lies 300 metres from the cemetery and is marked by a post and a rock cairn and plaque.

* Prior to the arrival of Europeans the area had been occupied by the Mangarayi and Yangman First Nation people.

* In 1879 Abraham Wallace became the first European to take up land in the area. He overlanded 2,728 cattle from Bowen Downs in Queensland and established Elsey Station.

* In 1902 Aeneas Gunn and his wife Jeannie took over the management of Elsey Station.

* By 1907 there were plans to bring the railway from Darwin to Bitter Springs.

* During World War II Mataranka was the headquarters for over 100 Australian units. It had a hospital, ammunition dumps, abattoirs and a sawmill.

* In 1946 Victor Smith, who had been at Mataranka during the war years, returned and established a resort at Mataranka Springs.

* The railway line closed in 1976 after a cyclone damaged the line.

* In 1982 the movie of We of the Never-Never was shot in the area. It starred Angela Punch McGregor as Jeannie Gunn and Arthur Dignam as Aeneas Gunn.

* In 2003 the railway line from Alice Springs passed about 20 km west of the town. 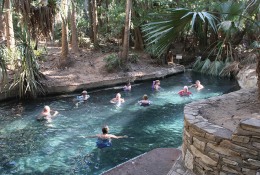 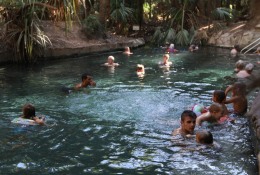 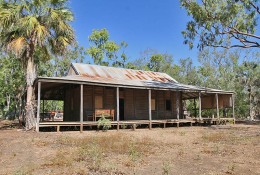 The replica of the Elsey Homestead in the Tourist Resort grounds 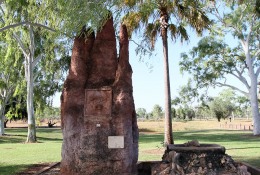 A termite mound in the park in the main street 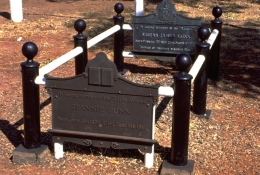 The graves of Jeannie and Aeneas Gunn in the Elsey Cemetery. 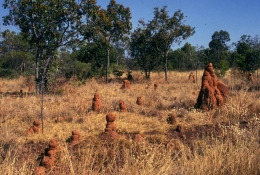 Termite mounds in the Savannah grasslands around Mataranka