There is really one reason for visiting Mathoura: the Millewa Forest to the east of the town is the world's largest red gum forest. Beyond that Mathoura is a small rural service centre. It is a comment on just how small the town is that the local visitor centre also includes a Bendigo Bank, the library, wine tasting, Centrelink, Medicare and the internet. The mainstay of the town's economy is the timber industry. The red gum timber is used for railway sleepers, furniture, landscaping, firewood and fence posts.

Mathoura is located 753 km south-west of Sydney via Lockhart and Deniliquin. It is 38 km south of Deniliquin, 42 km from Echuca and 97 m above sea-level.

It is claimed that 'mathoura' is a local Yorta Yorta Aboriginal word meaning 'windy'. The settlement was officially named by the government surveyor in 1858. Prior to 'Mathoura' it had been known as Redbank, after an inn on the river bank.

Mathoura Heritage Trail
A brochure outlining the nine places of interest in the town can be downloaded at http://www.mathoura.com.au/mathoura-maps. With the exception of the town's Fire Tower (on the corner of Mathoura Street and Morris Street) the rest of the buildings are located on, or close to, Livingstone Street. It is a comment on the modest history of the small town that the notable historic landmarks  include the original Douglas Brothers' store, the Mathoura Railway Station and railway sleepers, the main street, the single storey Pastoral Hotel, the old water tower, the Red Gum man and the Soldiers Memorial Gardens.

Gulpa Creek Walk Trail
The Gulpa Creek Walk starts at Cranes Bridge and continues along both sides of the Creek until it reaches Poley's Bridge and Picnic Point. It is a flat, easy walk of 3.6 kkm which can have another 1.5 km added if you also decide to do Poley's Loop. There is a detailed brochure Gulpa Creek Walk Trail which can be downloaded. It has nine points of interest including:
1. Cranes Bridge which was built in 1925 by the Douglas Sawmill so that bullock teams could bring timber from Gulpa Island to the mill in Mathoura. It is an ideal place to see the Cadell Fault as a cutting, which is 2.4 metres deep, has been carved into the fault. It was created so that large logs could be hauled to the mill.
3. Aboriginal Oven Mound - a rare example of an oven created by the local Yorta Yorta people where fish, shellfish, birds and small mammals were cooked.
8. Bush Tucker - you can see bush tucker along the walk including dwarf cherry, butter bush, water ribbons, yellow wood sorrel and cranesbills.
9. Canoe Tree - there are at least three canoe trees along the walk. These are trees where the bark has been removed to make canoes.
Gulpa Island is contained between the Edward River and Gulpa Creek.

Gulpa Island Drive
This 10 km drive through the Murray Valley National Park is described in great detail at http://www.nationalparks.nsw.gov.au/things-to-do/Driving-routes/Gulpa-Island-drive. It is an opportunity to see the Red River Gums in all their glory as well as to check out the birdlife in the district which includes pelicans, swans, cormorants, kingfishers, ibis, spoonbills and duck species which inhabit the wetlands. There are also martins, blue wrens, doves, cockatoos, parrots, eagles, hawks and warblers in the area. There are also kangaroos, possums, foxes and emus in the drier areas and the occasional platypus and water rat in the creeks and rivers.

Murray Valley National Park
Mathoura Forest covers 70,000 ha and offers the visitor a rich diversity of activities and fine examples of local flora and fauna. For a comprehensive overview and detailed information check out http://www.nationalparks.nsw.gov.au/visit-a-park/parks/Murray-Valley-National-Park. The suggested activities include canoeing or kayaking on the Edward River; observing the rich birdlife at the Reed Beds Bird Hide boardwalk; and staying at the many campsites in the park. There are numerous beautiful drive trails which wind through the forest where some of the trees rise to a height of 40 m. Timber has proven an economic mainstay of the area ever since the woodcutters first arrived in the 1860s. It is used for railway sleepers, fence posts, house stumps etc. In the early days the fallen trees were hauled by bullocks to the riverbank where they were loaded on barges and taken to the sawmills. The sawyers often left behind large stumps which can still be found in the forest. The size of the stumps is due to the fact that the red gum tends to be hollow at the base and so the timber-getters inserted a board in the base of the tree and stood upon it while cutting through the tree up to 3 m above the ground.

Cadell Tilt
To really understand the Cadell Tilt go to http://www.mathoura.com.au/about-us and download the 542 kb Mathoura Fact Sheet - Cadell Tilt which explains that between 20-30,000 years ago (some writers assert it was 25,000 years ago) a series of large earthquakes pushed up the land between Echuca in the south and Deniliquin in the north. Prior to this the Murray River had been flowing uninterrupted through the area. The "tilt" created a natural weir, the land flooded, and the waters from the Murray were redirected through the Edward River. At the time there were no Red River Gums in the area but around 6,000 years ago the gums started invading. The Tilt is visible on the eastern side of the Cobb Highway where the ground slopes down to the Millewa Forest and also near Cranes Bridge. Ask at the Visitor Centre for more specific instructions.

* Prior to the arrival of Europeans the area around Mathoura was inhabited by the Yorta Yorta Aboriginal people.

* The first European into the area was the explorer Charles Sturt who reached the Edward River in 1838 but crossed to the southern side of the Murray River because of impassible wetlands.

* In 1840 Edward Howe, overlanding cattle to South Australia, camped on the banks of the Gulpa Creek.

* In 1842 a squatter named Peter Stuckey took up land at Mathoura.

* In 1853 William Carter took over Ward's shanty and called it Redbank Inn. The settlement became known as Redbank.

* In 1859 Cobb & Co start a service from Deniliquin to the Redbank Inn.

* In 1865 Robert 'Redgum' Barbour built his first sawmill. In the same year Henry Burton purchased the Redbank Inn. He was a circus proprietor and he used it as his winter base.

* By 1876 the privately owned Moama to Deniliquin railway company was running trains between the two centres which ran through Mathoura.

* In 1877 local parents built a schoolhouse and a sawmill was opened in town.

* In 1896 127 unemployed men from Sydney arrived to thin out the red river gum forest.

* By 1906 Mathoura was the principal town of the newly established Murray Shire.

* In 1926 Victorian Railways stop purchasing railway sleepers and 50 timbercutters were put out of work.

* In 1930 7,000 railway sleepers were cut at Mathoura to build the trans-continental railway across the Nullarbor.

The town's website - http://www.mathoura.com.au - has useful information about accommodation and attractions in the area. 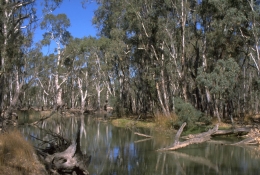 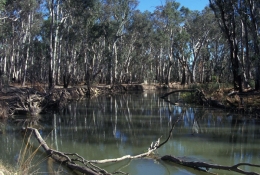 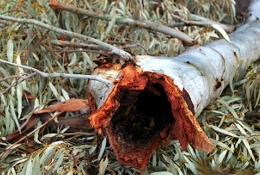 A Red River gum branch, a Widowmaker, which has broken off a tree. 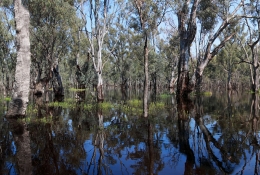 Red Gums beside the Edward River.