There is really only one reason for stopping at McKinlay: Crocodile Dundee. In the movie the local pub, the Federal McKinlay Hotel, was renamed the Walkabout Creek Hotel. Shortly after the movie became a box office hit (1986) the pub was sold for $290 000 and subsequently it was renamed and promoted it as the town's one tourist attraction. Historically the town grew as a service centre for the surrounding pastoralists. Today, with the interest generated by Crocodile Dundee, it is nothing more than a couple of stores, a few houses and a pub. Like so much of western Queensland any future that it might have had was destroyed with the arrival of motor vehicles and farm mechanisation. It is a town with a single novelty. Sadly that novelty is now a sleight of hand. The pub has been moved to the main road and the facade has been modernised.

McKinlay is located 1,597 km from Brisbane via Longreach and the Landsborough Highway. It is 107 km south east of Cloncurry and 240 km north west of Winton.

McKinlay was named after the McKinlay River which, in turn, was discovered and named by the explorer John McKinlay. In 1861 McKinlay led the South Australian Burke Relief Expedition into the area to search for Burke and Wills.

The Walkabout Creek Hotel
By 1986 there were very few buildings in McKinlay. One that was a local watering hole and a stopping point for travellers on the Landsborough Highway, was the Federal McKinlay Hotel (built in 1900 and licensed in 1901), which featured in the first Crocodile Dundee movie. In the late 1980s it was sold for $290,000. It was shifted from its original site (the site shown in the photograph at the top) in the mid-1990s and sold to a miner from Gladstone in 2014. The facade, as can be seen in the photographs, has been radically changed. The interior capitalises on the original pub's association with Crocodile Dundee.

The Statue of John McKinlay
Located in the side street, the silhouette sculpture of John McKinlay was unveiled in 2012 (150 years after McKinlay passed through the area) and records that "Our town, and the McKinlay Shire were named after the great Australian Explorer, John McKinlay, who passed here in 1862 during his epic travels from Adelaide to the Gulf of Carpentaria in search of the ill-fated explorers, Burke and Wills."

* The explorer John McKinlay passed through the area in 1862. He was leading the South Australian Burke Relief Expedition to search for Burke and Wills.

* Captain James Henry, the founder of Cloncurry, passed through the area in 1866.

* The explorer, George McGillivray, was in the area in 1867.

* Gold was discovered on the McKinlay-Cloncurry road in 1872.

* In 1883 a letter receiving office was opened in the small settlement.

* In 1888 allotments of land in McKinlay were sold and 17 people bought half-acre blocks. This year saw the establishment of a Cobb & Co staging post in the town.

* In 1932 the name Mackinlay was changed to McKinlay.

* In 1986 the Federal McKinlay Hotel was used in the making of Crocodile Dundee.

* By 1998 silver, lead and zinc were being mined by BHP Billiton at Cannington, 70 km away.

There is a useful local website. Check out http://www.mckinlay.qld.gov.au/visitors/36home.html. 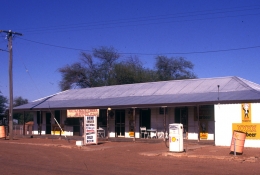 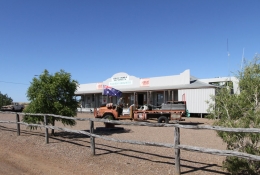 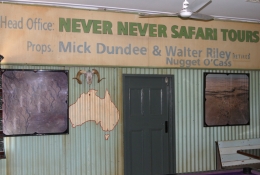 Remnants of the film set from Crocodile Dundee inside the Walkabout Creek pub. 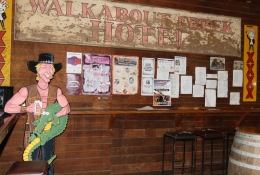 The interior of the Walkabout Creek Hotel - especially for tourists. 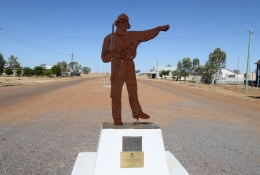 The town's solitary memorial - a silhouette of the explorer, John McKinlay