McLaren Vale is a charming and substantial township surrounded by more than 100 vineyards and wineries. On every side there are fields of grapes and the signposts at various points are thick with invitations to visit cellar doors to sample the vintages and purchase the locally made wines. The McLaren Vale Heritage Trail brochure points out the essence of the appeal of the area when it notes: " there are many distractions along the way; restaurants and eateries to tempt your taste buds with fine foods and local produce; wineries with products that will more than satisfy your palate and a number of craft shops, galleries and other points of interest to keep you occupied.

There is an interesting dispute about the naming of McLaren Vale. One source suggests that it was named after David McLaren, the Colonial Manager of the South Australia Company, who arrived in the colony in 1837 and departed three years later. Other sources claim that town was named after a John McLaren who surveyed the area in 1839. The local Aborigines reputedly called the area Myallina Dooronga.

McLaren Vale Heritage Trail
The best way to experience the historic locations in McLaren Vale is to download a map (https://www.walkingsa.org.au/wp-content/uploads/2017/01/McLaren-Vale-Heritage-Trail-map.pdf) and follow the signs, most of which are on the Main Road, around the town. Each point is marked by a sign (see No. 14 and No.15 below for the contents of two of the signs) and, even if the historic building has been removed, they tell a fascinating story of the early history of the town with interesting anecdotes and human interest stories. Start at the McLaren Vale & Fleurieu Coast Visitor Centre.

1. Uniting Church – Main Road. Site of the Wesleyan Methodist Church opened 14th April 1858.
2. The Barn – Main Road. Formerly a coach.
3. Marieberg Limeburners Centre – Main Road. The original cottage was built in 1854 taking it’s name from the occupation of one of it‘s later inhabitants,a brick layer who burnt lime behind the cottage to make mortar used by local builders.
4. Hotel McLaren – Main Road. From 1857 - 1901 was known as The Clifton Hotel.
5. McLaren Vale Fruit Packers – Main Road.
6. Hardy Tintara Winery – Main Road. Originally established in 1852 as the McLaren Vale Union Flour Mill.
7. Almond Train – off Main Road. Historic carriages once used on the Adelaide to Willunga line 1915 - 1969.
8. The halfway tree – Chalk Hill Road. Located halfway between the villages of Gloucester and Bellevue.
9. Institute Building – High Road.
l0. Tatachilla Winery – High Road. Built in 1901 by Cyril Pridmore and called “The Wattles”.
11. McLaren Vale Galleries – High Road. The first hotel in the area built in 1849 by William Colton. 12. Ellis Park – High Road.
13. Congregational Church – High Road. Built in 1850.
14. Main Road Streetscape 1910. Looking northwards from the corner of Aldersey Street and Main Road. The sign records: “Streetscape looking North-West. Photograph reproduced from a post card stamped December 19110. The children’s clothing would suggest that they had just come out of a Sunday school from the Congregational Church on the left and were meeting at the post office and store opposite, after services. JW Wiltshire’s store shown here was originally owned by George Field in the late 1800s. Mr Field was a homeopathic chemist who was often referred to as ‘The Doctor’. He served as storekeeper, postmaster, chemist and Register of Births Deaths and Marriages. He also carried out dental extractions.”
15. Nichol’s Store. Sadly, this is now a car park for a shopping centre but the sign has a photograph of the original building and interesting text which explains: “In the late 1890s, Robert J Nichol built a new general store and post office, with house attached, on the corner of Field Street. He conducted his business here for approximately 20 years when Mr Skipworth, the last of the post officer storekeepers, purchased the store. He had the store for five years. In 1919 Phil Reeves and his brother Herbert bought the store and continued in business until 1946. Nichol’s old store, updated by Herbert Reeves, became Branch Number 45 of the Home Service Stores chain. Phil Reeves continued employment with successive new owners. He completed 53 years service on the road with a grocer’s delivery van operating from this shop. The house and store site are now a car park, built in 1978, for a supermarket.”
16. The Chapel – Tatachilla Road - referred to as the “House of the Lord”.
17. The Public School – Tatachilla Road - The original rear section was built in 1865.
18. Tsong Gyiaou (Third Bridge) – behind the Hospital in Aldersey Street. The former home of Mary Ann Aldersey, a missionary who spent time in China
19. Morgan’s Blacksmith. Established in the mid-l800’s, John Morgan set up a smithy, wheelwright, and carpenters shop on the corner of Tatachilla Road and Main South Road.
20. Ferris Saddlery – High Road. John Ferris built this stone premises in 1880.
21. St. Margaret’s Anglican Church - High Road. ln 1905 Thomas Hardy donated the land for this church.
22. Salopian Inn – High Road. Formerly Gumprs Hostelry (1851–1853.
23. Mrs Jarrad’s Store – Mudge Street.
24. McLaren Vale Railway Station site. The Adelaide to Willunga railway line operated from 1915–1969. The old railway line through to Willunga, with a sealed surface, now forms a route for cyclists and walkers.
25. Site of Pavy’s Brewery – Field Street. Operating from 1850 to 1863 as a brewery.

McLaren Vale: Our Community, Our Stories
Located on the wall of the ANZ Bank in Main Road is an interesting mosaic titled McLaren Vale: Our Community, Our Stories. It was created in 2016 as a collaboration between Claire Kennett (a local artist) and project manager Anne Rhodes. The sign beside the mosaic explains: "The Mosaic features many aspects of our community and lifestyles including avenues of grape vines, almond blossom trees and coastal area. On the left is a cyclist and the chequered flag representing the Tour Down Under and on the right a lady at a cafe with her dog, and a mandala representing our artistic and cafe cultures." There are individual signs relating to sections of the mosaic.

Wineries in the Area
In areas like the McLaren Vale, where there are over 88 cellar doors, it is best to refer to the specific knowledge provided by the local tourist information sites. The McLaren Vale Cellar Doors & Wineries site (https://mclarenvale.info/explore/drink) provides all the details of opening hours, phone numbers and contact points. The McLaren Vale wine region is known for its dry red wines, especially those made from Shiraz, Grenache and Mourvedre grapes.

d'Arenberg Cube
Located at 58 Osborn Road, the d'Arenberg cellar door and vineyard has turned itself into an impressive art exhibition with outside displays and an impressive five storey building which is known as the d'Arenberg Cube. The cube has been described as an "optical illusion of floating in a vineyard, each level with spectacular views overlooking the rolling hills of Willunga. Inside is the winery's Tasting Room, a restaurant, private function areas and numerous artworks and features throughout." If you book into the restaurant they offer free entry to the art gallery. Check out https://www.darenberg.com.au/alternate-realities-museum for more details. The Tasting Room is open from 10.00 am - 5.00 pm and the restaurant is open from Thursday to Sunday.

Maslin Beach
Located 6 km west of McLaren Vale, Maslin Beach known locally as 'Maslins' is known as South Australia's most famous nudist beach - it was Australia's first nudist beach. Mind you, you have to walk 800 metres to the southern end of the beach before you can disrobe. There is a clearly signposted area where nude sunbathing and swimming is allowed.
The beach is three kilometres long and is recognised as one of the most beautiful beaches in the state with high cliffs near Blanche Point and pristine sands along its length.

Coast to Vines Rail Trail
The Coast to Vines Rail Trail is a shared path for cyclists and pedestrians that follows the route of the original railway from Marino to Willunga. It is approximately 37 km and traverses the coastal cliffs at Marino, the suburbs of Hallett Cove, Reynella, Morphett Vale, Hackham, Seaford Rise and then passes through McLaren Vale and on to Willunga. There is a downloadable map at https://cdn.marion.sa.gov.au/sp/Coast_to_Vines_Brochure_Map.pdf?mtime=20180403161742. There is detailed information about each section of the route at https://www.railtrails.org.au/trail?view=trail&id=199.

* Prior to the arrival of Europeans the area was home to the Kaurna Aboriginal people.* It is likely that the town was named after David McLaren, the Colonial Manager of the South Australia Company, who arrived in the colony in 1837 and departed three years later.

* The first grapes in the valley were planted in 1838.

* In 1839 John McLaren surveyed the area. Before McLaren the local Aborigines called the area Myallina Dooronga.

* As early as 1850 the historic Hardy and Seaview wineries were in operation.

* Thomas Hardy's purchase of the Tintara vineyard in 1853 is often cited as the beginning of the town.

* In 1857 Thomas Hardy became the first person to export Australian wine to England.

* A hamlet named Seaview came into existence in the 1870s and a chapel was opened there in 1880.

* By the 1920s the name McLaren Vale was applied to the region more than a town.

* During the 1920s the wine industry trebled its exports.

* In 1923 the town of McLaren Vale was gazetted as a private town.

* In the 1950s a number of cellar doors opened in the valley.

* The entire McLaren Vale wine area was protected by an act of parliament which was legislated in 2013.

* Today it is known internationally for its excellent wines.

There is an excellent local website. Check out https://mclarenvale.info. 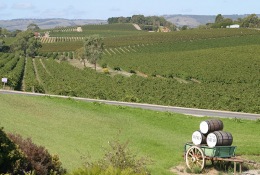 The view over Maxwell Wines vineyards 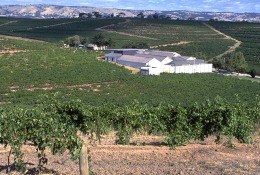 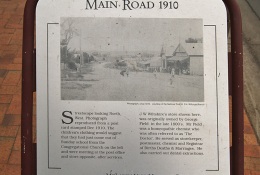 Sign No. 14 - Main Road - on the McLaren Vale Heritage Trail 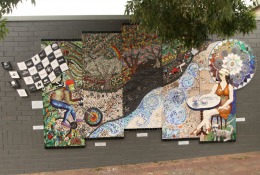 McLaren Vale: Our Community, Our Stories mosaic on High Road 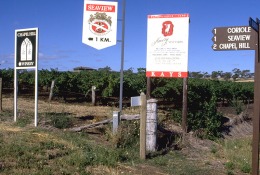 Signs to the Chapel Hill winery, the Seaview Winery and the Amory Vineyards 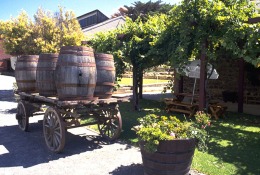 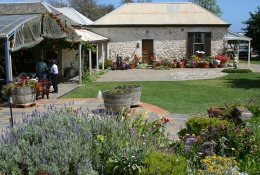 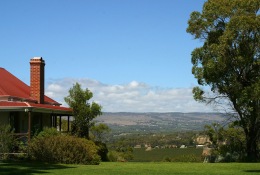 The view from d’Arenberg Cellar Door and Restaurant 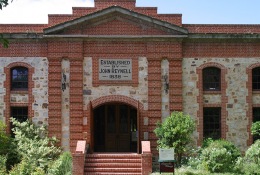 The elegant cellar door at Chateau Reynella dates from 1838 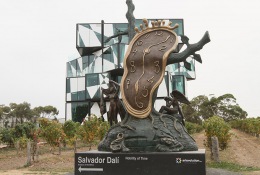 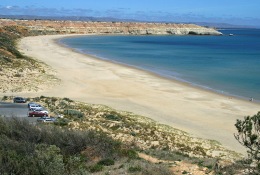