Blue Mountains town made famous because of the iconic Hydro Majestic Hotel.

Medlow Bath would probably have been cut from this survey of towns if it wasn't for the gracious Hydro Majestic Hotel. It is being reopened progressively from 2014 until completion in 2016. Beyond the hotel there is little to draw the visitor to Medlow Bath with the notable exception of Point Pilcher, a little known lookout which looks north across the lesser known extremities of the Grose Valley.

Medlow Bath is located 6 km west of Katoomba, 107 km west of Sydney via the Great Western Highway, and is 1050 metres above sea-level.

The original name of the settlement was Brown's Siding which was given to the railway siding in 1880 because the main business in the area was Brown's Sawmill. In 1883 the name was changed to Medlow because there was another Brown's Siding near Lithgow. No one is sure where Medlow came from. It could be a corruption of the Gundungurra word "megalong" or it could be taken from Medlow in England although Google maps do not identify such a place.

Hydro Majestic Hotel
The main attraction at Medlow Bath has always been the remarkably ornate Hydro Majestic Hotel. Its history is fascinating. The land, overlooking the Megalong Valley, was purchased by Edward Hargraves who had received £10,000 for being the first person to discover payable gold in New South Wales. Unfortunately this was not true but Hargraves still kept the money. Hargraves built a house on the site. The view was remarkable - as it still is today.

By 1891 a portion of the land had been developed and the Belgravia Hotel had been built to take advantage of tourists who sought the cool, healthy air of the mountains.

In the early years of the twentieth century the Sydney businessman, Mark Foy, purchased both the house and the hotel and an adjacent building and started constructing the remarkable 'Edwardian folly' called the Hydro Majestic. His plan was to create a hotel which was also a 'hydropathic establishment'.

By 1903 Foy had not only completed his therapeutic centre but he had also managed to change the name of the town to Medlow Bath. He employed a Dr Bauer from Switzerland to introduce the latest hydropathic methods from Europe and institute a strict health regime which was enhanced with fresh produce from the Megalong Valley which was relayed up the hill by a specially built flying fox. The resort had its own water supply, steam laundry, freezing works, sewerage treatment works and a telephone system connected to the Sydney exchange.

Foy's healthy, hydropathic vision did not prove profitable and the hotel changed and became a classy destination for holidaymakers. During World War II, the US Defence Department used the building as a hospital for soldiers injured in the South Pacific.

In 1946 it was reopened as a hotel but it was allowed to decline slowly so that by the 1990s it had a pleasant, old fashioned charm but was looking very tired.

Today it is being opened progressively until completion in 2016. Check the Hydro Majestic website for updates on the progress of the revitalised hotel. http://www.hydromajestic.com.au

Point Pilcher
To reach Point Pilcher turn right at the traffic lights after the Hydro Majestic, drive east beside the railway line and head to Point Pilcher on Rutland and Grand Canyon Road.

The sign at the Point Pilcher lookout explains that "Point Pilcher is a few hundred metres to the north-east of the original (Old) Point Pilcher. Mark Foy probably named the area after Norman George Stafford Pilcher, a Sydney barrister around 1905 ... The Old Point Pilcher Track was built by Mark Foy's gardener Murdo McLennan in 1907, specifically to link Old Point Pilcher into the Grand Canyon Track.

To reach the lookout it is necessary to drive  5.2 km down a dirt road. At the end is a  superb view down to Govetts Creek and across dense bushland, known as the Grose Wilderness, which has remained totally untouched.

* On 26 May, 1813 Blaxland, Wentworth and Lawson, while crossing the Blue Mountains, became the first Europeans to pass through Medlow Bath.

* Some time in the 1880s Edward Hargraves built a house at Medlow Bath where the Hydro Majestic now stands.

* In 1891 the Belgravia Hotel was opened next to Edward Hargraves' house.

* In 1904 the Sydney businessman Mark Foy had the railway siding renamed Medlow Bath.

There is information available about Medlow Bath and the surrounding region from the Blue Mountains Heritage Centre and National Parks Shop, Govetts Leap Road, Blackheath, tel: 02 4787 8877 which is particularly good for bushwalking advice and the Blue Mountains Visitor Information Centres at Katoomba and Glenbrook. 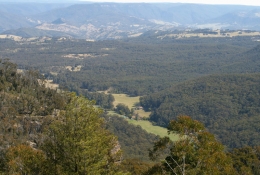 The view from the Hydro Majestic looking down into the Megalong Valley. 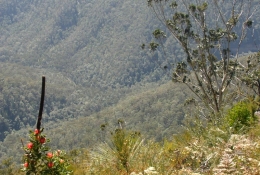 The view from Point Pilcher Lookout down into the Grose Valley. 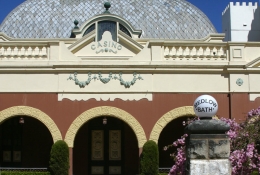 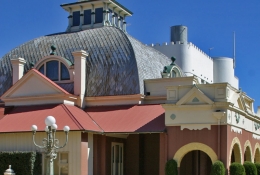 The old casino with all its elegance (pic taken 2006)