The one accessible major valley in the Blue Mountains which can be explored in a regular vehicle.

There are three major valleys in the Blue Mountains - the Jamison Valley which can be seen from Echo Point at Katoomba, the Grose Valley which can be viewed from Govett's Leap Lookout at Blackheath, and the Megalong Valley which lies to the south of Blackheath. The Megalong Valley is the only valley which is easily accessible by two wheel vehicle and, as such, offers a rare opportunity for visitors to drive into a valley through the ferns and rainforest which cover the escarpment. The valley is quiet and peaceful and characterised by sheer cliffs and some very pleasant bushwalks.

It has been claimed that 'megalong' is a Gundungurra Aboriginal word meaning 'valley under the rock', presumably a reference to its location below Narrow Neck.

Bushwalking
The main appeal of the Megalong Valley is the opportunity to walk a short or modest section of the famous Six Foot Track. It is possible to drive down Megalong Valley Road until you cross the track which happens to be close to the Megalong Cemetery. There are two obvious options: you can continue along the Six Foot Track to the point where it crosses Coxs River. This is 15km and will take a full day. Alternatively you can head towards where the walk starts at the Explorers Tree. This involves a difficult ascent of 4km. A third option is that you can walk the short distance to the Megalong Cemetery which was officially gazetted in 1898. There is an obelisk which bears the names of those who were buried there, mostly early settlers and local Aborigines. The last burial occurred in 1931.

The Six Foot Track was created in the 19th century as a horse track from Katoomba to the Jenolan Caves. In 1884 a survey party travelled from Sydney, stayed in Katoomba, and the next day descended at Narrow Neck by a rough zig-zag path into the Megalong Valley where they established a base camp on the Megalong Creek. They were unhappy with the route and subsequently blazed a fresh route from the Megalong Creek up Nellie's Glen to the Explorers' Tree on Pulpit Hill. They eventually reached the Jenolan Caves on 3rd April, 1884, having marked the route with blazed trees. It took eleven days to mark the 26 miles (42 km) of track. The result was that travellers could now ride from Katoomba to the Jenolan Caves in less than eight hours. The new track became popular and was described in the 1894 issue of the Blue Mountains Railway Tourist Guide as 'steep in places, but the romantic beauty of the surroundings amply compensates for the roughness of the ground'. The Six Foot Track, as it became known, was maintained for many years by two men using a wheelbarrow, picks and shovels. In recent years it has been revitalised and has become an important and fascinating walking trail through the mountains. For more information check out https://www.lifesanadventure.com.au/tours/six-foot-track-walk/ which offers an excellent three day, guided walk of the entire trail.

* the area had been occupied by the Gundungurra Aboriginal people for an estimated 40,000 years before Europeans arrived. The last Aborigines to live in the Megalong Valley weere Werriberri (Billy Russell) who was known as a tribal chief and three members of the Lynch family. They all died in the early years of the twentieth century.

* the first Europeans to settle in the valley arrived in the 1830s. They settled on properties ranging in size from 40 acres to larger holdings of many hundreds of acres and engaged in farming and timber cutting. The timber was taken up the mountain and sold in Blackheath and Katoomba.

* In 1870 Campbell Mitchell found traces of oil-bearing shale (for kerosene) in the valley and this led, by the 1880s, to twenty-eight mining leases being applied for in the Parish of Megalong.

* A post office was established in the valley in 1892 in a store operated by Elizabeth James. In 1915 the post office added a single public telephone.

* By 1905 shale mining had stopped in the valley. It was briefly restarted during World War II because of a shortage of fuel.

* Coal mining in the valley occurred briefly between 1931-32.

* Today the Megalong Valley is a quiet retreat which, surprisingly, still has two churches and a school.

There is very little visitor information available but the closest is at the Blue Mountains Heritage Centre and National Parks Shop, Govetts Leap Road, Blackheath, tel: 02 4787 8877

The only place to eat in the valley is the excellent Megalong Valley Tea Rooms. Check them out at http://www.megalongtearooms.com/

There is no specific website for the Megalong Valley. 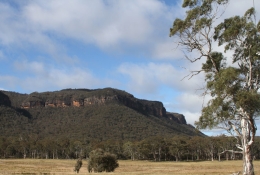 View across the valley floor to the sheer cliffs of the escarpment. 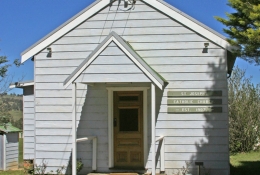 The wooden St Josephs Catholic Church which dates from 1902. 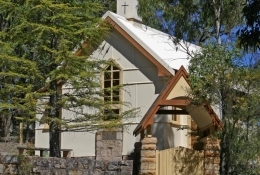 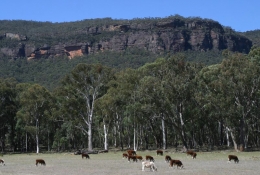 Cattle on the valley floor below the sheer cliffs of the escarpment. 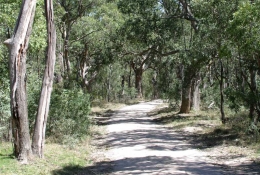 The Six Foot Track near the Megalong Cemetery.