Known as the City of Melton, it is now a satellite of Greater Melbourne

Historically Melton was a quiet rural village lying north-west of Melbourne. In the 1970s it became a residential satellite of the city. Today it is a large, sprawling urban centre and its primary appeal for visitors lies in its remarkable indigenous Botanic Gardens (one of the best indigenous plant gardens in Australia), the pleasant walk along Toolern Creek and the interesting historic retreat that is Willows Historic Park.

Melton is located 45 km north-west of the Melbourne CBD and 130 metres above sea-level.

Melton was surveyed in 1852 and named after the English town of Melton Mowbray which was known as a popular location for fox hunting. In the early years the local settlers ran hounds on their properties in the area.

Interesting Historic Buildings
Melton Court House
Located at 323 High Street, the former Melton Court House was, for many years, the district's Visitor Information Centre. It is listed in the Victorian Heritage Database because it "is significant as the only surviving brick example of a Federation styled court house building in Victoria. Built in 1892 at a cost of £857.11.0 by building contractors, Brooke and Brundell to a design by the Public Works Department Architect, Samuel E. Bindley, the former court house is predominantly intact." It goes on to explain: " It demonstrates original design qualities of a Federation style which are rare for a late nineteenth century court house building. These qualities include the gable roof form that traverses the site, together with the elevated gable roof form (comprising the court room) and the skillion verandah with gable entrance portico that projects towards the front. Other intact or appropriate qualities include the asymmetrical composition, single storey height, face brick wall construction, slate roof cladding, two face brick and multi-corbelled chimneys, modest eaves, three small horizontally-proportioned, flat-arched, timber framed 3-paned clerestorey windows with cream brick voussoirs in the court room gable end, decorative gable infill (stuccoed panelling and timber battening supported by timber brackets) in the court room and verandah gable ends, decorative timber gable bargeboards, turned timber verandah posts, decorative timber verandah brackets, framed turned timber fretwork valance in the verandah gable (and the framing only in the remainder of the verandah), flat-arched timber framed double hung windows with cream brick voussoirs and the timber framed doorway with transom above." For more detailed information check out https://vhd.heritagecouncil.vic.gov.au/places/30105/download-report.

Street Art Around Melton
The City of Melton has an active street art program. Keep and eye out for art works in the most unlikely places. Some of the impressive ones include:
Everybody Belongs - on the wall at 359 High Street. It was painted in 2018 by Damien Arena, Jack Denic, Nathan Hoy, Daniel Hoy and Danushka Gunasekara.
Birds of a Feather - at 327-329 High Street. Painted by Phibs in 2018.
Check out https://www.melton.vic.gov.au/Out-n-About/Arts-culture-heritage/Art-in-Public-Spaces/Street-Art for more information.

There are also impressive sculptures nearby including a particularly striking image of a harness racing horse which is also the Town Clock.

Raglan's Cottage
Located at 237 High Street, Raglan's Cottage is a rare nineteenth century building in Melton, the only other remaining examples being the churches, the state school, and the buildings associated with The Willows. It is the only non-recent commercial building in Melton. Its rarity together with its characteristic 19th century construction materials (coursed-rubble bluestone and handmade brick), distinguish it as a key heritage building within the town. For more information check out https://vhd.heritagecouncil.vic.gov.au/places/30130/download-report.

Toolern Creek Trail
Starting at the Hannah Watts Park, this 4.4 km trail "follows Toolern Creek a significant stream that feeds into the Werribee River at Exford. The vegetation along the creek is a 'Creekline Grassy Woodlands' of the Victorian Volcanic Plains, while the escarpment is 'Escarpment Woodland'. There are remnant Blackwood (Acacia melanoxylon) and the large River Red Gums (Eucalyptus camaldulensis) such as Big Red may be over 400 years old. There are rare native raspberry (Rubus parvifolius) that can easily be mistaken for blackberry." For more information and a map check out https://www.melbourneplaygrounds.com.au/toolern-creek-trail-melton#.XeXac5MzZBw.

The Willows Historical Park
Located in Reserve Road, on the east bank of Toolern Creek, 'The Willows' is an historic stuccoed stone-rubble residence which now houses historic memorabilia. The front section is the original homestead. It was probably built in the 1850s. The larger section is thought to date from the 1860s. Although this is essentially an unpretentious vernacular building it has been lavishly ornamented with quoins, keystones, voussoirs and chimneys with buttresses and dentils. It is open on Wednesdays and Sundays from 1.00pm - 4.00 pm, or contact Melton District Historical Society, tel: 0402 053 175. Located in the park is the Dunvegan Cottage. There is more information at https://www.melton.vic.gov.au/Out-n-About/Parks-grounds-and-trails/Parks-Recreation/The-Willows-Historical-Park.

Melton Botanic Garden
Located off 40 Lakewood Boulevard, the Melton Botanic Garden has an easy 2.4 km walk which includes an interesting diversity of dry climate plants (mostly from Australia) and a circumnavigation of the Darlingsford Lake. The excellent https://walkingmaps.com.au/walk/3979, which includes a map and a series of photographs, notes that "The park includes areas of remnant indigenous grassland and woodland along Ryans Creek, as well as a range of planted garden areas, including Southern African, Bushfoods, West and South Australian Gardens. With more than 100 different species on display, this is a particularly great place for gum trees, which was the focus for the Gardening Australia feature. The wide range of dry climate plants means there are a lot of different flowers, so this is a colourful place to visit." When I visited I wrote "The superb Melton Botanic Gardens is a tour de force. One of the very, very best Botanic Gardens I have seen anywhere in the country ... and it is entirely run and maintained by volunteers.
There are two reasons I am in love with this garden –
(a) although it has African and American plants it is primarily, and overwhelmingly, a celebration of Australian eucalypts and it has special sections on Australian dryland plants and plants from Western and South Australia and
(b) it names everything clearly. So botanical fools can wander the Eucalypt Arboretums (there are four of them) and go “So that is what an ironbark looks like ... and how beautiful are the flowers.” And “I love those flowers on the rose mallee.”
I learnt more in an hour of wandering through this remarkable garden than I have in all the decades I have been bushwalking and mooching. The signage is so clear and the journey through the garden is so wonderfully informative.
And, in the spring, the eucalypts are all in bloom and you will see flowers you have never seen before. Amazing floral displays that deserve to be celebrated as true emblems of these continent’s unique flora.

Melton Reservoir
Melton Reservoir, on the Werribee River, is located 16 km from Melton via Exford Road which heads due south of the city. It is a popular fishing spot and is home of the Melbourne Runabout and Speedboat. There are picnic, barbecue, playground, parking and toilet facilities.

Long Forest Nature Conservation Reserve
Located 8 km west of Melton and running on both sides of Long Forest Road, the Long Forest Nature Conservation Reserve is the only naturally occurring patch of mallee south of the Great Dividing Range. At one time mallee scrub was common in the area but as the climate cooled most of it was replaced by eucalypt forest. The area was first mapped in the 1830s by a surveyor who described it as 'barren forest hills'. There was an unsuccessful attempt to mine gold here and, late in the 19th century, timber was cut for milk factories at Bacchus Marsh. With subdivision proceeding 245 ha was set aside in 1981 in recognition of the site's ecological rarity.
The dominant species in the reserve is bull mallee although blue box can be found along Coimadai Creek and grey box and yellow gum on drier sites. The reserve also has turkey bush, fragrant salt-bush and some rare orchids. There are about 200 species of birds, as well as kangaroos, wallabies, koalas, echidnas, gliders and possums. Bird watching, nature studies and bushwalking can all be enjoyed.
There are a number of moderate walks in the reserve. All of them start at points off the Long Forest Road.
* Djerriwah Track - 3 km easy. For more information check out https://www.parks.vic.gov.au/places-to-see/sites/djerriwarrh-walk.
* Happy Valley Track - 4 km return, easy - A carpark and information shelter which marks the start of the Happy Valley Track. Check out https://www.parks.vic.gov.au/places-to-see/sites/long-forest-happy-valley-picnic-area.
* Long Point Track This is also the access point for the Steep Track.
* Comidai Track - 5 km return, medium difficulty - For a detailed description check out https://www.bushwalkingblog.com.au/coimadai-creek-hike-long-forest-nature-conservation-reserve-bacchus-marsh-victoria-2.

* Prior to the arrival of Europeans the area was inhabited by the Woiwurung Aborigines.

* The townsite developed in the early 1850s on the route to the goldfields of the Central Highlands.

* The town was surveyed in 1852 and named after the English town of Melton Mowbray.

* The district developed into a pastoral and agricultural region and was proclaimed a shire in 1871.

* The railway line from Melbourne arrived in 1884.

* In 1974 Melton was declared a satellite city of Greater Melbourne.

* From 1975 to 1984 Melton had the highest annual growth rate of any municipality in the state.

There is a useful local website. Check out https://www.melton.vic.gov.au/Out-n-About/Discover-the-City-of-Melton. 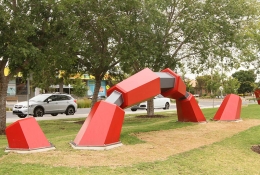 Sculpture in the town square 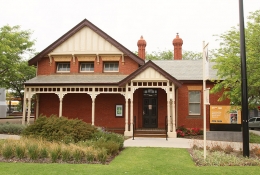 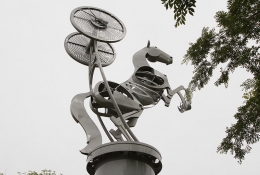 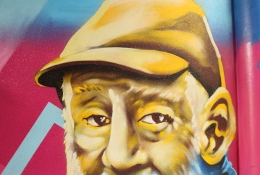 Detail of the mural ‘Everybody Belongs’ 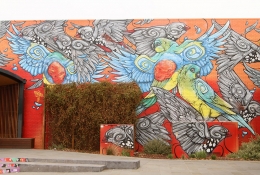 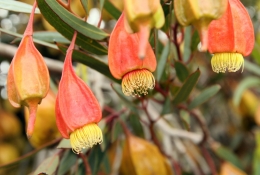 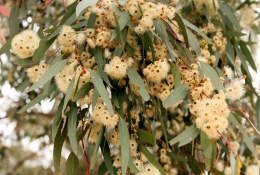 Flowers of the Yellow Box eucalypt in the Melton Botanic Garden 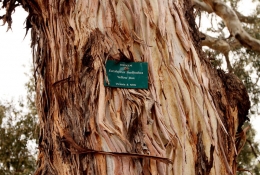 The signage is so clear you will learn to identify eucalypts