The conventional definition of a 'cave', when it relates to a natural attraction, is either a sheltered area on the side of a hill or an underground wonderland, usually made from limestone, with stalactites and stalagmites. The Melville Caves are different. They are a collection of huge granite boulders sitting on the top of a massive granite tor in the Kooyoora State Park. It is the spaces between these huge boulders which form the 'caves' or 'cavities'. However, the cavities are, in fact, a series of large fissures which have formed in the weathered granite. They were where the bushranger, Captain Melville, hid and the lookouts were where he spied on the passing coaches and escorts coming from the nearby goldfields.

The Melville Caves are located 204 km north-west of Melbourne via the Calder Highway and 22 km west of Inglewood.

The caves were named after Captain Melville, a name used by Frank McCallum, a bushranger who used the caves as a hideout.

Melville Caves and Kooyoora State Park
Located 22 km from Inglewood and 2 km along a dirt track is the Melville Caves Picnic Area where there are toilets, information boards, picnic tables and water.
There are a number of walking trails which lead to the lookouts and the huge boulders which form the 'caves'.
There are four defined walking trails within the park:
* Melville Caves Walking Track - 1 km circuit - starts at the Melville Caves Picnic Area and climbs to the summit and the Melville Caves Lookout. A steep track returns from the summit to the car park.
* Melville Caves Lookout - 300 metres - from the car park to the lookout. If this site was used by bushranger Captain Melville it was principally because of its elevated position and its views over the plains where the gold coaches and gold escorts could be easily viewed.
* Long Rock Walking Track - 6635 metres. The total climb and descent is 214 metres each way. Trail Hiking Australia (see https://www.trailhiking.com.au/melville-caves) describes the walk as "Start from from the picnic area head to the Southern Lookout, then backtrack 200m to rejoin the track heading north. Walk in a clockwise direction to McLeod’s Lookout with magnificent views. The track continues south through remarkable rock formations and rock pools."
* Eastern Walking Track - 4.5 km circuit. The track continues past Long Rock down to a fenced bush paddock, across a creek, down through some more unusual rock formations, giant granite slabs and balancing rocks, before climbing out of the valley and back up the car park.
All the walks are described in great detail, and with suitable maps, at https://www.trailhiking.com.au/melville-caves.
The Kooyoora State Park's activities include sightseeing, walking, rock-climbing, picnicking and camping. Fossicking and gold detecting is only permitted in certain areas. The Park features many typical north-central Victorian forest communities, including red gum, yellow box, grey box and red ironbark. There are also many colourful native orchids. The open forests are home to mammals and tree-nesting birds such as the kookaburra and swift parrot. Wedge-tailed eagles dwell among the granite tors and rainbow bee-eaters make homes in the granite soils. Kangaroos and wallabies inhabit the grasslands and ground-dwelling animals such as the marsupial mouse live amidst the scrubby understorey and ground litter. There are over 130 bird species in the park.

Rheola
Lying 9 km to the south of the Melville Caves is the tiny, historic gold mining village of Rheola. It is particularly fascinating because it is still possible to see the remnant mullock heaps where prospectors, determined to find gold, dug holes and left mullock-like mounds. It has a cairn which records: "Rheola 150 Gold. To mark the 150th anniversary of the first gold find in Victoria. In this Rheola (formerly Berlin) District twenty alluvial gold nuggets exceeding 450 ounces were unearthed. This was one third of all the nuggets larger than this size officially recorded in Victoria. They included:
The Precious - 1621 ounces - 1871
Viscount Canterbury - 1114 ounces - 1870
Viscountess Canterbury - 912 ounces - 1870
The McEvoy - 810 ounces - 1867
The Kum Tow - 796 ounces - 1871
There is a helpful website. Check out http://www.rheola.com.

The Life of Captain Melville
The best account of Melville's life can be found at the Australian Dictionary of Biography (check http://adb.anu.edu.au/biography/melville-francis-4183). It explains his early life as follows: "Francis Melville (1822-1857), bushranger, was born probably Francis McNeiss McNiel McCallum in Inverness, Scotland. He had some schooling but about 12 became a thief. In the Perth Court of Justiciary he admitted to serving four sentences totalling twenty-two months before 3 October 1836 when at 15 he was sentenced to seven years' transportation for housebreaking. As Edward Melville (Mulvell) he served for twenty months in English gaols and was then sent to Hobart Town in the Minerva. He arrived on 29 September 1838 and in October was placed at Port Arthur in the Point Puer institution for juvenile convicts. In 1839-48 he came before the police magistrate twenty-five times. In 1841 his sentence was extended by two years for felony in February and to life for burglary in July; in September he was sent to Port Arthur for five years. Recommended in 1846 for a year's probation, he absconded and lived with the Aboriginals for a year. After recapture he was given nine months' hard labour in chains, an experience repeated in January and August 1850.
Calling himself Captain Francis Melville and posing as a gentleman, he reached Victoria about October 1851 and by December had turned bushranger ...Melville created a legend of the cultured gentleman of good address and scholarship turned highwayman, considerate to those whom he robbed, courteous and charming to women, and a nineteenth-century Robin Hood."

* Prior to European settlement the area was inhabited by the Jaara Jaara Aboriginal people who took shelter amidst the rock formations and relied on natural springs and wells for their water supply.

* The first Europeans in the area were the party of Thomas Mitchell during his Australia Felix expedition of 1836.

* European settlement of the district began in the 1840s.

* Gold was discovered north of Melville Caves, near Wedderburn, in 1852. Gold prospectors flooded into the area.

* In 1851-1852  bushranger 'Captain Melville' (nee Frank McCallum) used the caves as a camp and strategic vantage point. He conducted raids at numerous points throughout western and south-western Victoria.

* The White Swan Quartz Mine operated in what is now Kooyoora State Park during World War II, producing industrial and ornamental quartz.

* The 'Caves' were listed as a geological monument in 1980. In January of that year a 240-gram nugget was found. It led to a minor goldrush which turned up a 2.4 kg nugget.

* The World Orienteering Championships were held here in 1985 and the Park was declared that same year.

There is no visitor information centre but there is a "Tourist Stand" at Inglewood at the Empire State Hotel.

There is a good description of the caves and the walking trails at https://www.goldfieldsguide.com.au/explore-location/133/melville-caves. 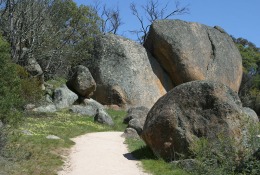 The track to the caves and the lookout 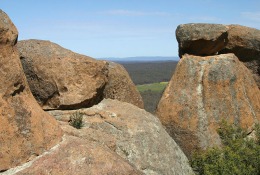 The view from the rocky tor 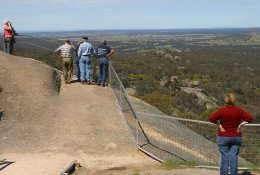 The view from the lookout 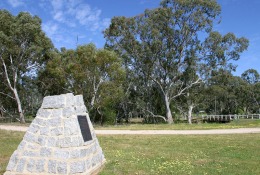 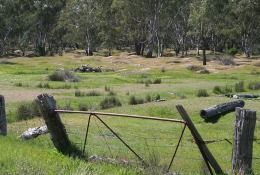 Remnants of old mullock heaps on the goldfield at Rheola