Menzies is a tiny mining town between Kalgoorlie and Leonora on the Goldfields Highway. Apart from a few interesting, historic buildings in town and a number of ghost towns (all former mining towns) in the hinterland, it would be a town of little interest. However the decision in 2003 to allow the esteemed English sculptor and artist, Antony Gormley, to create a unique artistic work in Lake Ballard has meant that it has an attraction of international stature. It is just a pity that it is 724 km from Perth.

Menzies is located 131 km north of Kalgoorlie via the Goldfields Highway and 724 km north-east of Perth.

It is claimed that the town honours a Canadian gold prospector named Leslie Robert Menzies who, in 1894, found gold in the area and started the rush which resulted in the creation of the town.

Town Hall
The Town Hall was erected in 1896 and extended in 1900. The style of architecture has been described as "rural Italian". Certainly it is a very handsome building and a symbol of the prosperity of the town at the time. At the time a huge clock was ordered from England. Unfortunately the ship, the SS Orizaba, carrying the clock sank and the municipal leaders, aware of the declining fortunes of the town, never ordered a replacement. A clock was finally installed in 2000.

Menzies Cemetery
Goldrush cemeteries are always interesting for the light they throw on the harshness that the early settlers had to endure. There are a number of graves of typhoid victims (one of the problems of early life in the desert with very little water) and a number of headstones have been made from iron and tin.

Railway Station
The Menzies Railway Station was completed in 1898 when the rail line from Kalgoorlie was extended north. Given the large population in Menzies at the time the railway line was opened by Sir John Forrest, the Governor of Western Australia. The line was closed in 1974.

Lady Shenton Hotel
At its peak Menzies had 13 hotels along Shenton Street. The Lady Shenton, named after the hugely lucrative Lady Shenton Mine (which, in turn, was named after the wife of Sir George Shenton, president of the WA Legislative Council), opened in 1896, was successful for the next decade, and closed in 1910. It is currently owned by the Shire of Menzies and contains the Visitor Information Centre, local library and an Aboriginal Art Gallery.

Inside Australia - 51 Unique Sculptures
Antony Gormley, an internationally acclaimed English scultor and artist who is famous for his huge and beautiful Angel of the North statue at Newcastle-on-Tyne, was commissioned by the Perth International Arts Festival to travel to Menzies in 2003. His plan was to persuade the local people (and a few passers by) to strip naked. He then digitally scanned their bodies, reduced the images by 66 per cent, made sand moulds and cast them in stainless steel alloy. The result was 51 cast stainless steel figures - most representing people who lived in Menzies - which he placed on the Lake Ballard saltpan which lies to the north of the town. There are sensible instructions for viewing the installation at http://www.menzies.wa.gov.au/tourism/things_to_see/lake_ballard.html. The display is located 51 km north-east of Menzies via the Menzies Sandstone Road. There is an excellent short video on YouTube about the sculptures. Check it out at http://www.youtube.com/watch?v=VeIDvX23HYs.

Goongarrie National Park
South-east of Menzies is the 49,878 ha Goongarrie National Park which stretches to the east and west of the Golden Highway and extensive stands of mulga and mallee. Part of the National Park are the Goongarrie Cottages, another reminder of the changing nature of this area. There was a time when Goongarrie, where gold had been discovered in 1893, had a post office, two hotels and was serviced by a daily coach from Coolgardie to Menzies. All that is left are the cottages.

Abandoned Mining Towns
To the south of Menzies lie a number of abandoned mining towns. If you are fascinated by the transient nature of mining then a drive through the old towns of Siberia, Davyhurst, Mulwarrie, Mulline, Riverina, Comet Vale and Mt Ida is an illuminating insight into this most temporary of human activities.

* The first European into the area was the explorer John Forrest who passed through in 1869 looking for the lost explorer, Ludwig Leichhardt.

* Prospectors heading north from Kalgoorie were eager to find more gold in the area. This was achieved by Leslie Robert Menzies and John McDonald who discovered gold in 1894 and named their lease, Lady Shelton.

* Menzies was officially established in August, 1895.

* By 1896 Menzies had become a municipality.

* The railway arrived in 1900 by which time the town had two breweries, thirteen hotels and a population of over 10 000.

* Today Menzies is little more than a main street and a small population. The price of gold and the development of new technology can see the town's population rise and fall dramatically.

The local shire has its own website. Check out http://www.menzies.wa.gov.au/ for details of the accommodation and eating available in the town. 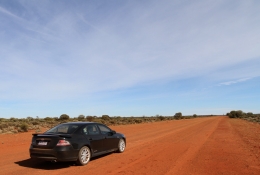 The 51 km dirt road from Menzies to Lake Ballard across the desert. 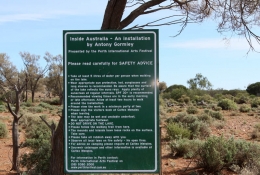 Wise advice at Lake Ballard - I failed on just about every point. 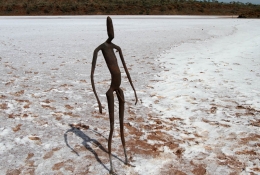 A figure close to the shoreline is surrounded by hundreds of muddy footprints. 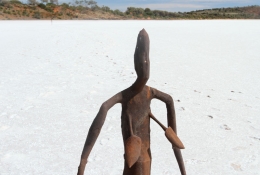 Close up of one of Antony Gormley's sculptures on Lake Ballard. 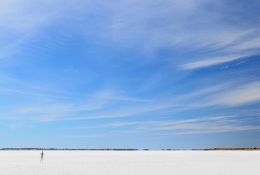 A tiny figure is swallowed by the vastness of the saltpan and the desert sky. 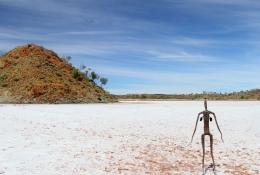 Figure of a woman far from the shoreline on Lake Ballard.