Merimbula is a charming seaside holiday and retirement town which lies on the hills around Lake Merimbula which is the mouth of the Merimbula River. The primary appeal of the town is the diverse water-based activities which include fishing, swimming, surfing, boating, lake cruises, scuba diving, sailboarding and canoeing. The area is also ideal for exploring Bournda Island and Wallagoot Lake, joy flights, bicycles, bushwalking, kayaking and bike riding. It is a town to be enjoyed for its relaxed lifestyle.

Merimbula is located 454 km south of Sydney via the Princes Highway and 522 km via the Hume Motorway, Canberra and Cooma.

There is considerable debate about the Aboriginal (presumably Yuin) meaning of "merimbula". Some sources claim it means "big snake". Others claim the word "merimboola" means "place of two waters or lakes" and others say "merrimbula" means "two waterholes"

Munn Tower House
In 1865 Matthew Munn established a corn flour factory, the Maizena Company, in Merimbula. In 1872 Munn built a large stone cottage called 'Courunga' which is now known as the Munn Tower House. It was reputedly built as a wedding present for his son. Around 1880 Munn's son added a two-storey timber tower with attic, and two single-storey timber structures with castellated parapets. It is located at 1 Ocean View Avenue and is now available for rental as self-catering accommodation. Check out http://pacificheights.com.au/tower-house for full details.

Old School Museum
The Merimbula-Imlay Historical Society's Museum is located in the Old School, a stone building which was the local Public School and dates from 1873. The building is thought to be one of only three surviving examples in New South Wales of a school containing both classrooms and a teacher's residence. There is an oyster punt at the side of the museum which dates from about 1915. The museum is open Tuesdays, Thursdays and Sundays from 1.30 pm - 4.00 pm. For more information check out http://merimbulahistoricalsociety.webhive.com.au which includes details about entry fees.

The Steamer Wharf
The main mode of South Coast transport until the 1950s was by steamer and consequently most towns built there own wharves of which only the wharf at Tathra still remains. Merimbula built a substantial steamer wharf in the deep water beyond the sand bar in 1903 and it was used by shipping until the steamer service ended in 1952. It was always problematic being exposed to southerlies which meant that captains, unwilling to risk their vessels, often had to sail on to either Tathra or Eden. Though popular with fishermen the wharf was deemed unsafe and demolished in 1979. Local efforts saw the reconstruction of the wharf in 1983. The wharf storage sheds were classified by the National Trust and restored in 1987. Located in Lake Street, today it is an aquarium and restaurant which is open daily from 10.00 am. tel: (02) 6495 4446 or check out http://www.merimbulawharf.com.au.

Merimbula Boardwalk
There is a delightful boardwalk around the northern shoreline of Merimbula Lake. The Merimbula Boardwalk is 3.5 kilometres and takes about 90 minutes to complete. The boardwalk is suitable for bikes and chairs. There is detailed signage highlighting the local marine life and vegetation. It is an easy walk and offers excellent views over the lake.

Merimbula's Coastal Beaches
Merimbula's primary attraction is the impressive run of beaches along the coast. The popular destinations include Short Point, Spencer Park and Bar Beach. The sand bar at Merimbula Main Beach is sublime and Tura Beach (with a golf course designed by Peter Thomson) lies just next to Bournda National Park.

Magic Mountain Recreation Park
The South Coast is not known for its fun parks - that seems to be a north coast activity - but just north of Merimbula on Tura Beach Rd is the Magic Mountain Recreation Park with its water slides, mini golf, toddler pools, tree climbs, jumping castle and toboggan run. It is located in bushland which adds to the experience as there is native flora and fauna and bush walking tracks. Check out http://magicmountain.net.au for opening times, tel: (02) 6495 2299.

Wallagoot Lake
Located 15 km north of Merimbula, Wallagoot Lake lies in the heart of Bournda National Park. Its appeal is its combination of watersports - canoeing, sailing, water skiing, paddle skiing, power boating, windsurfing, beach and rock fishing, prawning, safe family swimming in the shallows - and is birdwatching and bushwalking. The main attractions include the Sandy Creek loop track ("The track passes through various natural habitats, such as dry sclerophyll forests, she-oak thickets, pockets of rainforest and an avenue of paper barks that fringe the picturesque Bournda Lagoon. The loop takes in the coastline, Sandy Beach Creek and Bournda Lake so bring along your swimmers and fishing rod."), the Turingal Head picnic area and the Bournda Lagoon. For more information check out http://www.nationalparks.nsw.gov.au/bournda-national-park/wallagoot-lake-picnic-area/picnic-bbq.

The park stretches from Tathra to Merimbula and is known for its more than 200 species of bird life (including threatened species such as the little tern, hooded plover and pied oystercatcher) and the common grey kangaroos, swamp and red-necked wallabies which can be seen grazing on the shores of Wallagoot Lake in the mornings and evenings. There are extensive bushwalking tracks along the coast, around the lake and in the hinterland. Turingal Head, Hobart Beach and Wine Glass Bay are all particularly attractive. Check out http://www.nationalparks.nsw.gov.au/bournda-national-park for detailed information on the park.

* The area was first explored by Europeans when, on 18 December, 1797, George Bass sheltered in the Pambula River.

* The Imlay Brothers (Peter, George and Alexander) owned land from Broulee to south of Twofold Bay and west to the mountains by the 1830s.

* By the early 1840s the Sydney merchants, the Walker Brothers, had taken over the Imlay Brothers holdings.

* By 1852 the land around Merimbula had been sold to the newly formed Twofold Bay Pastoral Association.

* Merimbula came into existence as a private village built by the Twofold Bay Association. They established a port in 1855.

* The first ferry service across Lake Merimbula was established in 1857.

* By 1866 the town's population was around 90 and there was a weekly steamship service from Bega to Merimbula.

* By 1868 an eight-horse wagon was making a weekly journey from Bega to Merimbula.

* A bridge across Merimbula Lake was constructed in 1908.

* By the 1950s the town was becoming a popular holiday resort.

* In 1952 the last steamer called at the Merimbula Wharf.

* In 1973 the Old School became the home for the Merimbula-Imlay Historical Society.

* The old bridge across the lake was replaced in 1982.

There is useful historical information which can be downloaded at http://www.sapphirecoast.com.au/site/wp-content/uploads/2013/06/Part-8-The-Towns-Merimbula-Tathra.pdf?13eb0b and http://www.merimbulatourism.com.au offers information about accommodation. 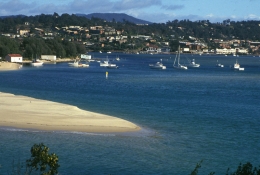 The view from the lookout above Bar Beach across to the town (pic. 1996) 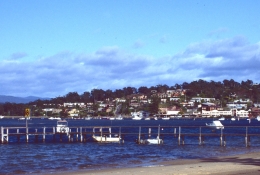 Looking across the water towards the township of Merimbula 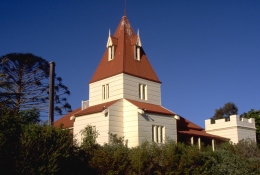 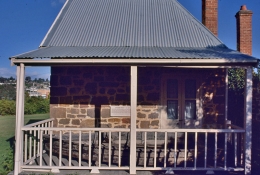 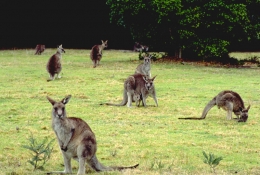 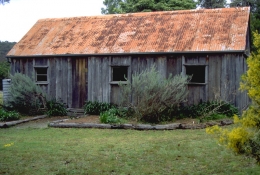