Major rural centre once known as 'The Garden Town in the Heart of the Wheatbelt'.

Towns in the Western Australian wheatbelt tend to be small and functional. Merredin, because of its unique location at a point where the track to the Goldfields met up with a reliable water supply, has developed into the most substantial town in the Central Wheat Belt. The town's promotion used to declare that it was  'The Garden Town in the Heart of the Wheat-belt'. Today it is an important town on the Golden Pipeline Heritage Trail. It boasts a number of good museums, has an excellent Visitor Information Centre and has cafes that serve quality coffee and meals.

Merredin is located on the Great Eastern Highway (National Highway 94) 262 km east of Perth and 314 m above sea level.

When the surveyor Charles Hunt passed through the district in the 1860s he heard the Nyaki-Nyaki Aboriginal people referring to the area as 'Merriding'. It may have been a place name but equally it may be a name derived from 'merrit-in' meaning 'the place of the Merrit' (merrit being a tree which was used for spears) or it was a name Aborigines used to describe the 'huge bare granite rock' now called Merredin Peak.

Merredin Railway Water Tower
The railway water tower, which still advertises the long defunct Kalgoorlie Bitter, was built in 1893 and was still providing water for trains as recently as the 1960s. It is located between the Military Museum and the Railway Museum and is adjacent to the Pioneer Park which has an impressive sculpture - "Bronze Horse at Work" - of a farmer with his plough and dog and draft horse. It is a reminder of how difficult life was for the early settlers.

Merredin Railway Museum
The Merredin Railway Museum is located at the original railway station which was built in 1895. Converted into a museum by the Merredin Museum and Historical Society after the completion of a new railway station in 1968, it is now recognised as one of the best railway museums in Australia with exhibits including a working windmill, a beautifully preserved 1897 G117 steam engine, and an historic station which still has old scales and cream cans. The railway reached Merredin in 1893 and the station was built two years later. At the time it was nothing more than a shed and a ramp but by 1904 Merredin had become an important locomotive depot on the line and it was a hub for a number of small branch lines which snaked out into the wheat-belt to service the surrounding farmers. The museum now has a vast collection of railway memorabilia. It is also possible to climb the signal tower. For more information tel: (08) 9041 1668. It is open from 10.00 am - 1.00 pm Monday to Friday; 9.00 am - noon on Saturday; and 11.00 am - 2.00 pm on Sunday.

Merredin Military Museum
Located on the Great Eastern Highway to the east of the Railway Museum, the Military Museum was established in 1994 and includes fascinating memorabilia (radio equipment, a portable camp stove, a dentist's chair, postcards) as well as a large number of historic working military vehicles which are still brought out for local parades. It is open 10.00 am - 3.00 pm Monday to Saturday, tel: 0429 411 204. There is a useful A4 sheet titled Merredin Military History Sites which is available at the Visitor Information Centre.

Merredin Peak Reserve and Railway Dam
The story of Merredin is the story of water and the story of water for both the railway and the town is fascinating. A large rock, particularly one with a non-porous surface, can yield a lot of water during a rainstorm and so a rock wall was built around the base of Merredin Peak. It gathered rainwater which was channelled into a 100 m stone-lined channel which ran into the Railway Dam which had a capacity of 25 million litres. Today 45 million litres of water comes off the rock in a typical year. The dam provided water for both the town and the railway. It now waters the parks and gardens in town. Constructed between 1893-1896 the innovative structure is still intact and can be easily reached via Benson Street which runs off the eastern end of Barrack Street. There are pleasant walks in the area and the trees around the dam are particularly impressive.

Merredin Peak Military Hospital Site
For around eight months during World War II the 2/1 Australian General Hospital was located at Merredin. The 264-bed hospital was moved to Merredin at the end of 1942. The location was chosen because it was on a railway line, far from the coast and it had an independent water supply. The hospital comprised 24 large tents each capable of holding 20 patients. At its peak the hospital had 5 medical officers, 34 nurses and 143 other ranked personnel. In August, 1943 the hospital was moved to Port Moresby and then to the Solomon Islands. Today there is a walking trail around the site with signage explaining this unusual footnote to Merredin's history. Access is from the Merredin Peak Reserve car park.

Historic Buildings in the Town
Town Hall and Court House
The Town Hall (1925) in Mitchell Street replaced the original town hall and Road Board office which had been erected in 1913. It has a clock tower which was made by the same company that built 'Big Ben' in London. It is actually a small replica of the famous London clock. The clock tower is a memorial to the local soldiers who died during World War I. Nearby is a small and charming Art Deco court house which was completed and opened in 1934.

Cummins Theatre
Cummins Theatre in Bates Street, which has Art Deco flourishes, was built in 1928 and is currently Heritage Listed. It was built from bits and pieces taken from the old Coolgardie Tivoli Theatre and some of the pubs which had been demolished in Coolgardie.  It has become local folklore that some of the bricks still contain small deposits of gold.

Merredin Bike and Walk Trails
There are three easy walks/bike rides around town. (a) The Merredin Peak Walk is 2.4km, is located off Benson Road, and passes through the woodland in Merredin's National Forest, a 1200 ha reserve which was originally established to provide the town with firewood. Today the walk passes the Railway Dam and the Military Hospital site. There is an excellent bike and walk trails brochure available at either the Visitor Centre or downloadable at http://www.wheatbelttourism.com/wp-content/uploads/2012/04/Merredin-Bike-and-Walk-Trails.pdf. (b) Tamma Parkland is a 1.2 km walk or ride through bushland which is particularly impressive during the wildflower season and (c) the Roy Little Park Walk is 1.2 km and passes a water feature noted for its birdlife and the town's Vietnam Veterans Reflection Pond Memorial.

CBH (Cooperative Bulk Handling) Wheat Storage & Transfer Depot
The CBH Wheat Storage & Transfer Depot at Merredin is the largest receival point in Western Australia. Built in 1966, it has a capacity of 460,000 tonnes and is reputedly the largest horizontal wheat storage facility in the Southern Hemisphere. It can be viewed from the Great Eastern Highway on the western side of town.

Merredin Pet Cemetery
A charming idiosyncrasy of the town is the Merredin Pet Cemetery located off the Great Eastern Highway to the east of the town. It has graves for, mostly, "man's best friend" with sentimental headstones with inscriptions such as “George Blom … Good mate … Faithful Friend”, Jessie Lockwood with an inscription “The God of Love and Peace / Shall Be With You / Thank you for the Love & Joy / You Gave to Me” and Montana. – a bulldog by the looks of the photo. This is no amateur enthusiasm. It  is a “Community Resource Centre Project” supported by Landmark, the Merredin Lions Club, the Ministry of Justice, China Southern WA Flying School and the local council.

Pumping Station No. 4
It is now just a series of buildings but, in terms of the history of Merredin and the Eastern Goldfields, it is a vital milestone in opening up the area. Today three pumping stations can be seen 3 km west of Merredin. The first was completed in April 1902. It was different from the other seven pumping stations (there were eight in total) along C Y O'Connor's famous pipeline - it had a circular, rather than a rectangular, receiving tank which held 4.5 million litres. In the 1950s it was replaced by an electric pump station and in 2001 an automated third generation pump station, costing $7.5 million, was built. The National Trust has published an excellent book - The Golden Pipeline Heritage Trail Guide - which is worth purchasing if you are interested in the fascinating history of C Y O'Connor's remarkable achievement.

* Prior to European settlement the area around Merredin was inhabited by the Nyaki-Nyaki Noongar Aboriginal language group.

* In 1836 Surveyor General J. S. Roe was the first European to travel through the area. It had been a dry summer and he was unimpressed by both the low rainfall and the harsh environment.

* By the 1850s there were sandalwood cutters in the district.

* Between 1864-66 Assistant Surveyor Charles Hunt explored the area. He travelled through the area five times and it was on his second journey in 1865 that he looked for the waterholes which would become the basis of the water supply for his York to the Goldfields track to the west. It was on one of the journeys that he named the area around Merredin, Hampton Plains after John Stephen Hampton who was the Governor of Western Australia at the time. The name did not endure.

* On his third expedition Hunt built a road joined by a series of wells and dams. The result was a track with regular water stops which later, with the discovery of gold, became known as the York to Goldfields Road.

* Hunt is credited with naming the town (after he heard the name from the local Aborigines) and it is likely that he climbed Merredin Peak.

* By the late 1860s settlers had taken up large pastoral leases in the district.

* By 1889 there was no town. When passing through the area, Assistant Surveyor Henry King set up camp on the north side of Merredin Rock as there was no settlement.

* In 1892, with the discovery of gold at Coolgardie and Kalgoorlie, a settlement was established north of Merredin Peak on the York to Goldfields Road.

* The settlement was moved further south in 1893 when it was discovered that the railway, which reached the town that year, couldn't follow the difficult gradients of Hunt's York to Goldfields Road.

* Between 1893-1896 the Merredin Peak Dam was constructed. It ensured Merredin's continued importance by providing reliable water.

* Merredin Peak Dam was made unimportant in 1903 when C. Y. O'Connor's 565 km pipeline, joining Mundaring Dam with Kalgoorlie, was completed.

* The Merredin Peak Dam continued to supply water to the railway until 1968. Today it is used as the water supply for the parks and gardens in town.

* In 1904 the Agricultural Research Station was established. It was here that the famous Bencubbin strain of wheat was developed.

* Land in the present townsite was offered for sale in 1906. These sales resulted in the building of a hotel, some general stores, a tailor's shop and a boarding house.

* By 1911 the Merredin Roads Board had been formed.

* Today Merredin is an important service town for the surrounding district. It is the largest town in the Central Wheatbelt.

There is an official local website - http://www.wheatbelttourism.com/ - which has useful information about accommodation in the area and downloadable brochures 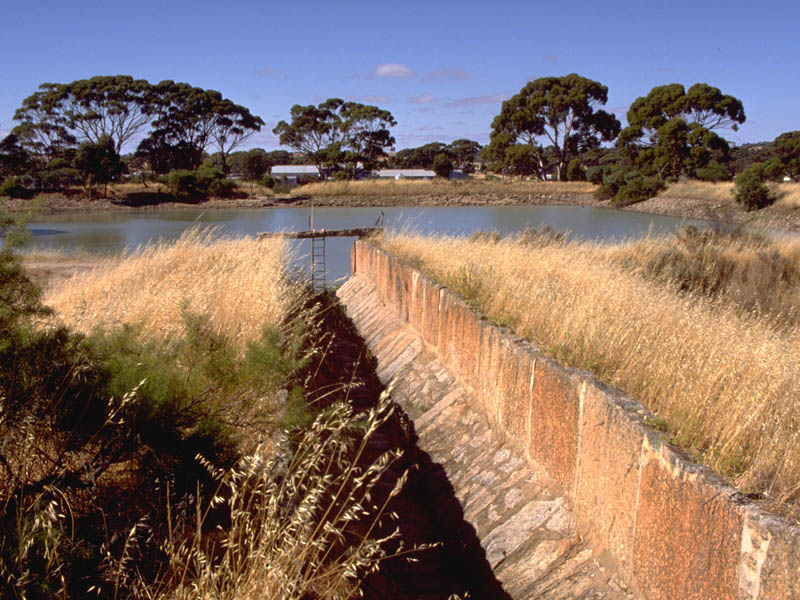 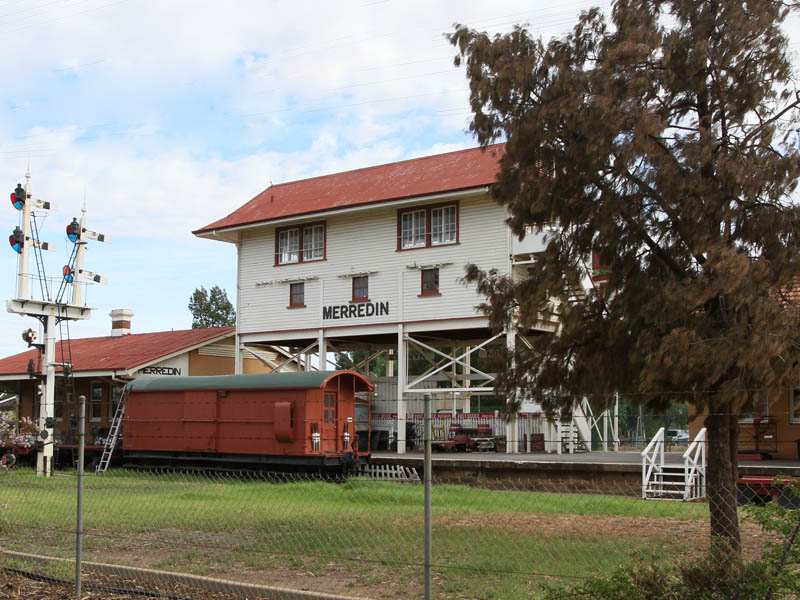 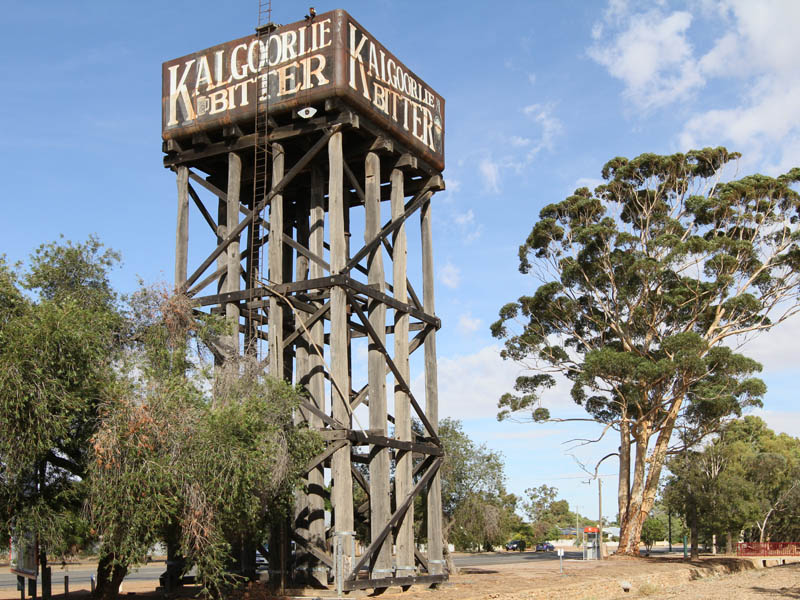 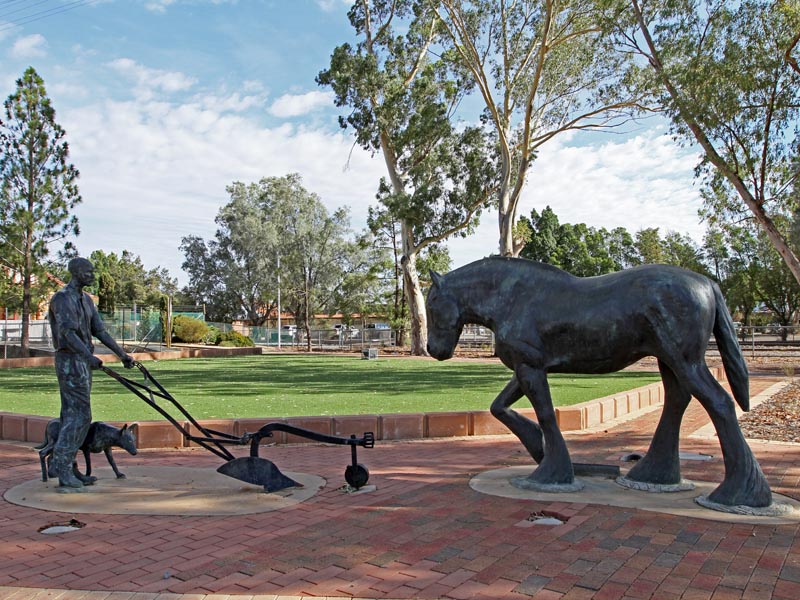 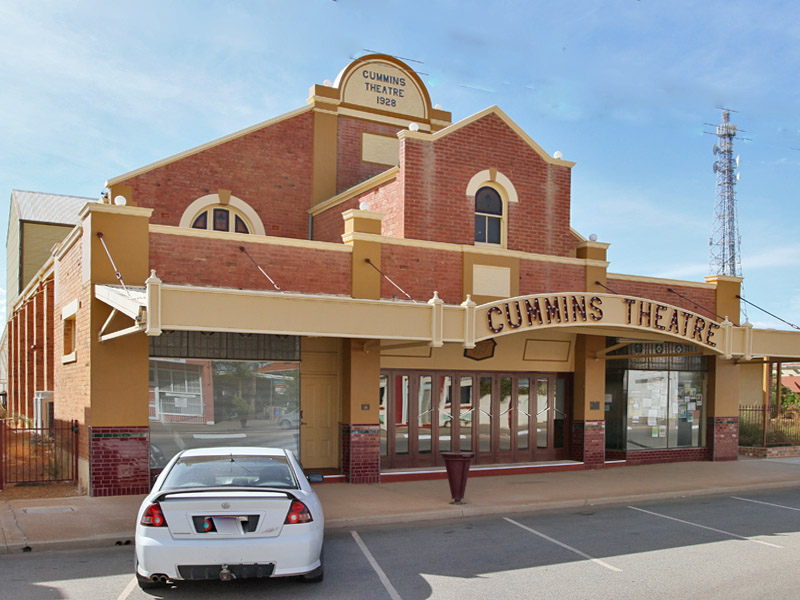 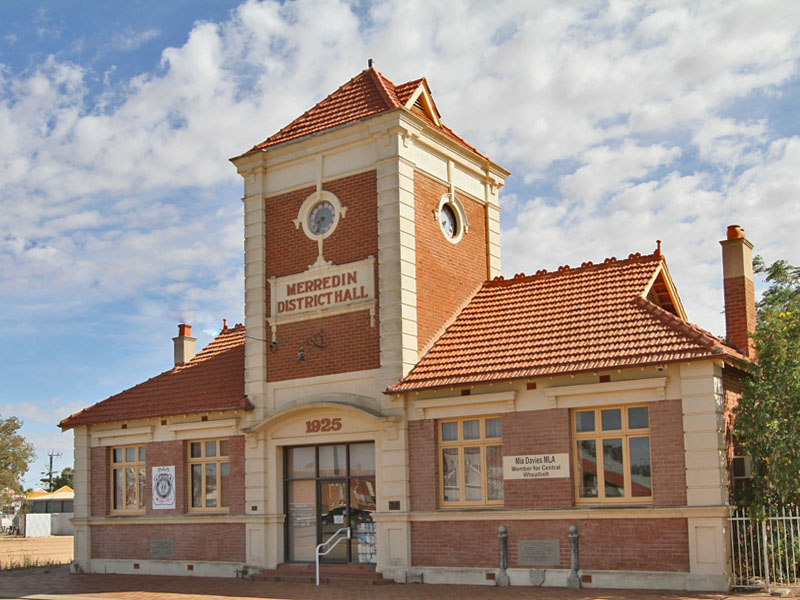 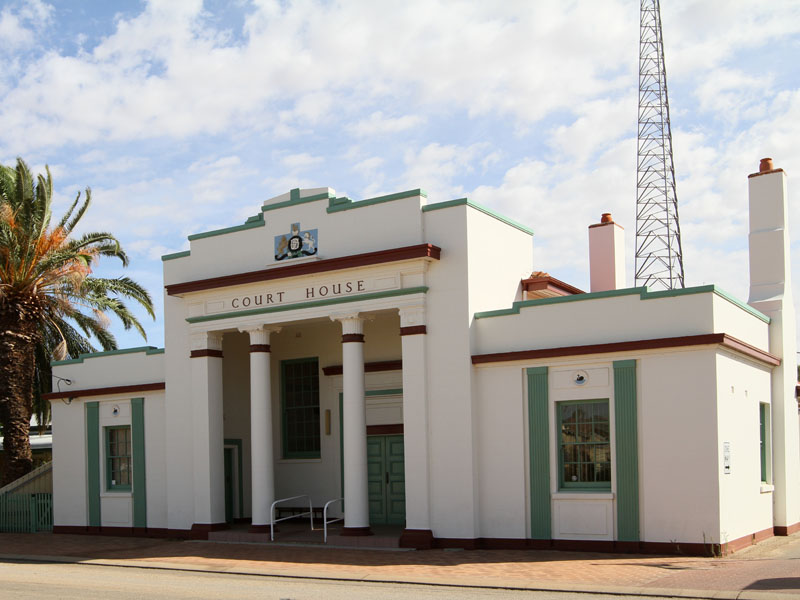 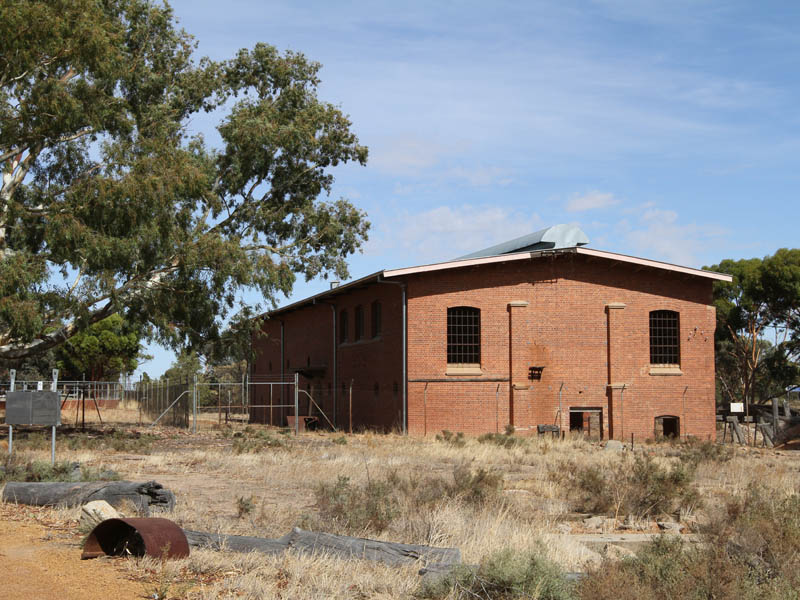 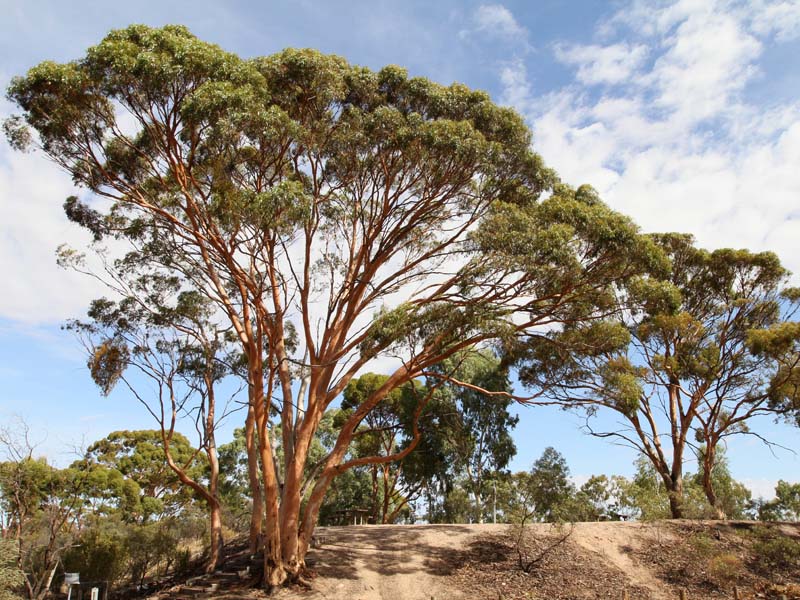 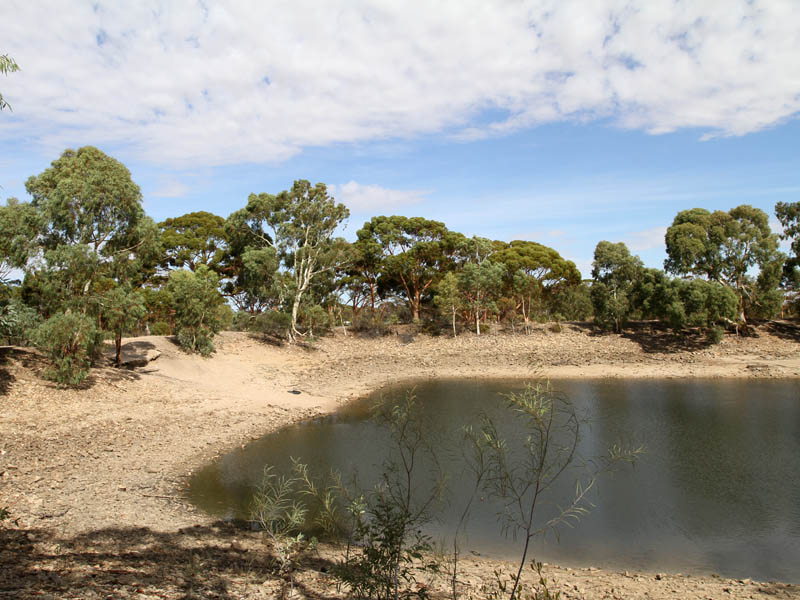 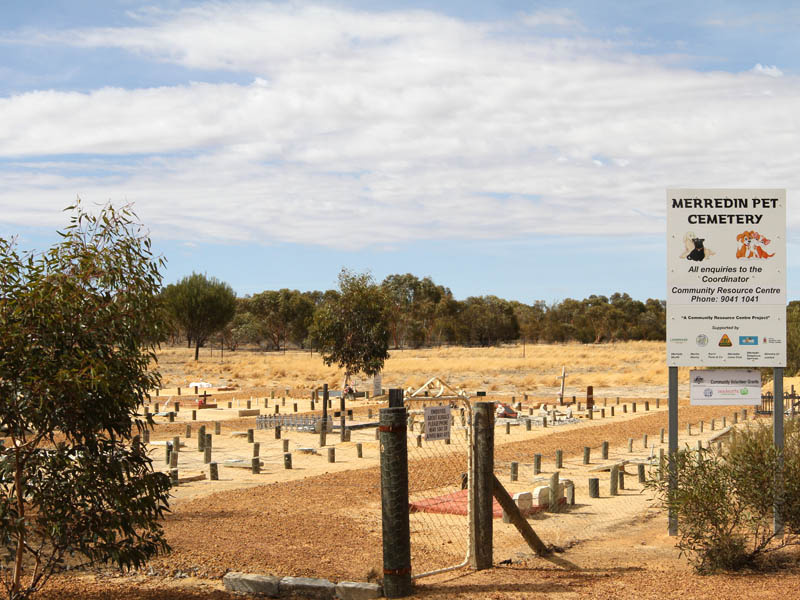