Tiny town in the western Riverina which claims, rather ghoulishly, to be the home of the legendary 'Black Stump'.

Merriwagga is a small town on the Kidman Highway which is dominated by its huge wheat silos and grain elevators. It is one of those towns which is easy to bypass (the visitor does have to cross the railway to enter the town) but the presence of the Black Stump Hotel, the memorial to the Black Stump and the Memorial to Pioneer Women make it worth a visit

Merriwagga is located 635 km west of Sydney via Bathurst, Cowra and Grenfell or 644 km via Goulburn, Ardlethan and Griffith. It is located 21 km north of Goolgowi on the Kidman Way.

It is believed that the town's name is the combination of a property and a water tank. Historically the town was located near Merri-Merrigal Station and near a water tank named the Wagga Tank. Combined they became "Merriwagga".

The Black Stump
There are a number of towns that claim to be the home of the 'Black Stump'. Merriwagga should win the prize for the most interesting story and certainly the most tragic and ghoulish tale.  On 14 November, 1970 the larger-than-life local politician, Al Grassby, officially opened a memorial which is a single piece of grey granite which records that "Ten miles west of this spot is a public watering place known, since 1910, as the Black Stump Tank. Also in this area are the Black Stump Well and the Black Stump Swamp. Local legend says that the names originated in 1886 with the death, by burning, of a woman named Barbara Blain, who is believed to be the first person in the Gunbar Cemetery. The area was a recognised overnight camp for waggon (sic) teams from as far north as Gilgunnia, travelling to the river steamers on the Murrumbidgee River. This monument was erected in memory of the pioneers who contributed so much to the development of the area."

The story of "the black stump" recalls how in 1886 a bullocky named Blain stopped at what has subsequently been gazetted as the Black Stump Tank. This was an overnight camp and watering hole for wagon trains which were carrying produce south to the paddle steamers on the Murrumbidgee River. Blain went looking for feed for his animals leaving his wife, Barbara Blain, to make camp for the evening. When he returned he found that her dress had caught fire, presumably while she was lighting the fire for the evening meal, and she had burned to death. It is said that when asked about his wife's death Blain explained, with that peculiarly droll and dry matter-of-factness of the Australian bush, that when he found her she "looked just like a black stump". The observation was so often repeated that the idea of the "black stump" became an image of isolation and hardship and most commonly occurred in expressions like "beyond the black stump" and "this side of the black stump".

The Black Stump Hotel
Over the years the Black Stump Hotel has become a symbol of the friendly ambience of Merriwagga. It was built in 1926 and has not changed much over the years. Its great claim to fame is that it has the highest bar in Australia - which means that everyone has to sit on stools (is there a bar where that doesn't happen?) and small people probably have to shout loudly to get a drink. Check it out at http://blackstumphotel.blogspot.com.au. It is over the road from the Memorial to Pioneer Women.

Memorial to Pioneer Women
It is a simple silhouette/ stencil image of a pioneer woman created by sculptor Ron Clarke depicting a resilient pioneer woman against a backdrop of horses and a paddock being ploughed. Appropriately it is located next to the memorial to Mrs Barbara Blain who was burned to death in a campfire while her husband, a bullocky, tended the cattle.

* Prior to the arrival of Europeans the area around Merriwagga was occupied by the Wiradjuri Aboriginal language group.

* The first run in the area was probably 'Honuna'. Gazetted in 1849 it later became a part of the 'Gunbar' run. The village grew around what began as a teamsters' campsite.

* In 1886 a bullocky called Blain camped at what became known as Black Stump Tank ten kilometres south of the future townsite.

* The railway reached Merriwagga in 1923.

* The village of Merriwagga was surveyed and gazetted on 4 April, 1924.

* In 1925 the Box Hollow dam was sunk to provide water to Merriwagga.

* In 1985 the local telephone exchange was automated.

There is an Information Bay in the Black Stump Park. For more detailed information refer to the Carrathool Shire Council, tel: (02) 6965 1900. There are a number of historic markers around the town. You can also get information at the Merriwagga Visitors Centre and Convenience Store, 1 Charney Street, tel: (02) 6965 4444.

The local shire council has a useful website at http://www.carrathool.local-e.nsw.gov.au/visiting-our-area-carrathool/merriwagga-carrathool. 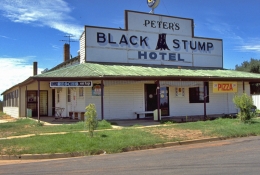 The Black Stump Hotel in the early 1990s. It hasn't changed much over the years. 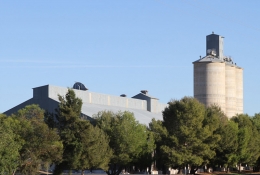 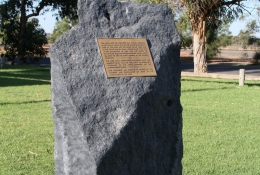 The memorial in Merriwagga to the woman who became known as the Black Stump after she was burnt to death. 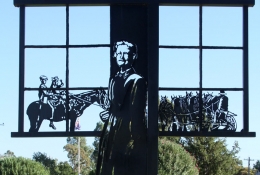 Women of the Land stencil image at Merriwagga.