Quiet town on the shores of Lake Alexandrina

Milang is a small rural community on the shores of Lake Alexandrina. It is the only town on the shores of the main lake and, although an important port in the mid-nineteenth century, today it is quiet and relatively underdeveloped. It is a holiday resort town catering for anglers and people wanting peaceful and uninterrupted water activities.

Milang is located 74 km south-east of Adelaide via Mount Barker and Strathalbyn.

The area around Milang was home to the Ngarrindjeri people and it is from the Ngarrindjeri word 'millangk' (which was Anglicised to Milang) which means 'place of the millin (sorcery)' that the town derives its name.

Milang Historical Railway Museum
The Milang Historical Railway Museum was opened in 1992 and is located on the shore of Lake Alexandrina in the original Milang railway station building. The museum has a railway station ticket office and old photos and railway memorabilia from the time when Milang was an important port for the Murray River trade. The museum includes a locomotive and a number of carriages as well as a gift shop which sells local crafts. One of the main attractions is Locomotive 351 which has been fitted with a driving simulator which allows people to sit in the driver's seat and start the train. The museum also includes the South Australian Light Railway Centre which recounts the unusual story of how there were over 700 light railways in South Australia and how they served the local mines, forests, wineries, munitions factories and quarries, and operated on jetties to transport goods from the shore to ships. There was an important light rail in Milang which ran from the jetty to the flour mill. The Light Rail Centre includes three historic locomotives and two section cars, displays, rolling stock models, and a model light railway.

Milang Jetty
The first Milang Jetty was built in 1856. It was originally 67 metres long but in 1869 it was extended to 217 metres and was used to service the boats which plied Lake Alexandrina's waters and made their way up the Murray River. In 1956 a flood seriously damaged the jetty but it still has the hand crane (erected in 1859) which was used to load the boats. The excellent http://milang.org.au/history/jetty explains: "Wool from the Darling and upper Murray stations was landed at Milang and then transported by horse and bullock teams to Port Adelaide. Wheat was transported to Milang and its flour mills and then shipped back as flour. Foreign goods shipped into Adelaide were then exported to Victoria and New South Wales through Milang, making over half of the colony’s total exports in the years 1868 to 1872."

Pier Hotel
The walk includes the Pier Hotel, a fine example of a 19th century pub. It is the last hotel from the time when Milang was an important port on Lake Alexandrina.

Historic Willow Tree
Located on the corner of Luard Street and Daranda Terrace is a willow tree that was planted on 11 November, 1867 by the Duke of Edinburgh, Prince Alfred, the son of Queen Victoria, when he visited the area. He went on a shooting expedition on Lake Alexandrina and planted this willow tree.

Police Station
Milang's Police Station dates from 1874 when the town was an active port. At this time more than half of all the exports up the Murray River were passing through Milang. It has become rental accommodation

Wetland Walking Trail and Foreshore
The wetland walk (there is a useful brochure which can be downloaded at https://www.visitalexandrina.com/images/documents/bird_brochure_final.pdf) follows the edge of a Samphire Swamp from the historic railway carriage to the foreshore. From the railway carriage follow the walk to the bird hide at the rear of the Regatta Club. Follow the roadway to the most southerly foreshore access at Windsurfer Point where there is another bird hide then continue north to the historic jetties and Pumping Station. The latter sites overlook Lake Alexandrina and associated reed-beds.
Birds to See: Latham’s (Japanese) Snipe, Black-winged Stilt, Lapwing, Great Egret and White-faced Heron in the Samphire Swamp, and Great Crested Grebe, Darter, Cormorants, Clamorous Reed Warbler, Golden-headed Cisticola, Tern species and Australian Pelican. Of particular interest is Latham's or the Japanese Snipe - a remarkable migratory shorebird which visits the wetland from September to March and has travelled over 10,000 km from Japan.

Milang Holiday Shacks
There is a long tradition of South Australians building simple shacks by the water to escape the heat of summer. In Milang this started in 1947 when the first shack was built and since then a series of shacks, all brightly painted and distinctive, have been built along the shore of Lake Alexandrina.

Nurragi Conservation Reserve Walking Trail
Often referred to as the Milang Wetlands Trail (which is actually the shorter section near the town) the Nurragi Conservation Reserve Walking Trail is a 14 km (3 hour) walk that follows the railway line from Milang to Sandergrove. Check out https://www.walkingsa.org.au/walk/find-a-place-to-walk/nurragi-conservation-reserve-walking-trail/ for more details, a downloadable brochure and a map.

* Prior to European settlement the area around Milang was home to the Punguratpular people, one of the eighteen groups which make up the Ngarrindjeri Aboriginal people.

* The first Europeans into the area were sealers who arrived in 1828.

* Captain Charles Sturt rowed a whale boat down the Murrumbidgee River in late 1829 and reached Lake Alexandrina on 9 February, 1830.

* Following Sturt the whole area along the Murray and around Lake Alexandrina was opened up particularly by overlanders who moved sheep and cattle across the land.

* In 1831 Collet Barker sailed along the western shoreline and demonstrated that Lake Alexandrina was the mouth of the Murray River.

* In 1838 Sturt endorsed Light's view that the mouth of the Murray could not be made safe for navigation.

* In 1851 the Hundred of Milang was proclaimed.

* The first town blocks were auctioned in 1854.

* The town came into existence in 1856 as an important river port servicing both the paddle steamers which plied the Murray River from Goolwa to the upper reaches of the river and the ferries which regularly crossed Lake Alexandrina.

* At its height Milang was a port where goods were unloaded onto bullock drays which made the slow (usually about 9 miles a day) journey across the Mount Lofty Ranges to Adelaide. At the same time the town was known as a ship building centre with a number of paddle steamers being launched from its yards.

* Both the Milang Jetty and the local Church of Christ were built in 1856.

* In 1858 a Post Office was opened. That year also saw the establishment of a flour mill.

* The town's heyday was from the mid-1850s through to the 1880s. It was during this time that the churches, the police station and most of the important public buildings were constructed.

* The town was visited in 1867 by the Duke of Edinburgh, the son of Queen Victoria, who went on a shooting expedition on Lake Alexandrina and planted a willow tree near the present site of the town's bowling club.

* In 1874 the Milang Police Station was opened.

* In 1884 a branch railway line opened between Milang and Sandergrove. That year saw the opening of the Milang Institute.

* The railway line was closed and dismantled in 1970.

* Today Milang is a holiday resort on the lake's edge. It is an ideal destination for campers and caravanners.

The Railway Museum has local information but is only open on Sundays. The closest Visitor Centre is the Goolwa Visitor Information Centre, 4 Goolwa Terrace, Goolwa, tel: 1300 466 592, Open 10.00 am - 4.00 pm daily.

There is an excellent local website. Check out http://milang.org.au. 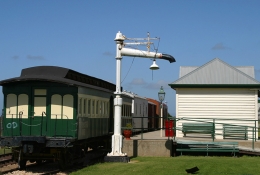 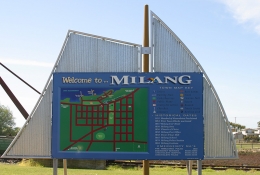 The map of Milang with appropriate sails 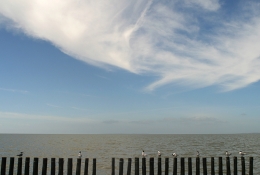 Lake Alexandrina is a haven for birds 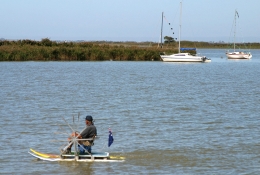 A jetty on Lake Alexandrina