Milawa is a small centre servicing a farming and wine-producing area. The heart of Milawa is The Crossroads where Snow Road (the road to Myrtleford, Bright, Mount Buffalo, Mount Beauty and Mount Hotham) and Factory Road (to Wangaratta) meet. It is in the town that visitors can stop and inspect the produce at Brown Brothers Winery with its Epicurean Centre, the Milawa Cheese Company, Milawa Mustards and the Olive Shop.

Milawa is located 257 km north-east of Melbourne via the Hume Freeway and 16 km south-east of Wangaratta via Oxley Flats Road.

Milawa was named in 1874 after a local Waveroo Aboriginal word thought to mean 'flat land'. There is an alternative version which claims it was named after 'millewa' which was the local Aboriginal name for the Murray River.

Old Emu Inn
Located at 1597 Snow Road is the Old Emu Inn building. It was built circa 1861 and once served gold miners en route to the Ovens Valley; bullock teams supplying the goldfields and it was used as a changing station for Cobb & Co coaches. The building later served as the Milawa police station. The old lock-up (brought from Beechworth by bullock team at the end of the 19th century) is still on the property, as is a 19th-century barn made of handmade bricks from clay dug out in the cellar. Milawa Mustards occupied the building in 1982 but subsequently moved to premises between Brown Brothers cellar door and the Milawa Cheese Company.

The Crossroads
The Crossroads are the heart of Milawa. The buildings along Snow Road and Mulawa-Bobinawarrah Road include the Commercial Hotel (established in 1865), a post office, and a general store-cum-coffee lounge situated in an old and charming building with an unusual facade.

Milawa Cheese Company
Located north of The Crossroads at 17 Factory Road, the Milawa Cheese Company was founded in 1988. It sells award-winning cheeses, including a distinctive creamy blue, a washed rind cheese, Milawa Gold and King River Gold. Sales, tastings and a ploughman's platter are available daily from 9.00 am to 5.00 pm, tel: (03) 5727 3589. Check out https://www.milawacheese.com.au for more information.

Milawa Mustards
Located at 62 Mulawa-Bobinawarrah Road in the old butcher's shop, is Milawa Mustards. It offers a wide variety of mustards, jams, chutneys, herb vinegars and preserves made from locally grown ingredients. The tasting room is open seven days a week from 10.00 am to 4.30 pm, tel: (03) 5727 3202.

Brown Brothers Winery
In 1859 George Brown moved into the district. In 1885 John Francis Brown planted 10 acres of grapes and by 1889 he had established Brown Brothers Winery, the oldest winery in the district. The first vintage was produced in 1889 in the Old Barn, which still stands. It is located at 239 Mulawa-Bobinawarrah Road, south of The Crossroads, and produces an extensive range of table, sparkling and fortified wines. Brown Brothers is open daily from 9.00 a.m. to 5.00 p.m. with a restaurant, picnic-barbecue facilities and a children's playground. For more information check out https://www.brownbrothers.com.au or tel: (03) 5720 5500.

Former Flour Mill
Located to the west of Milawa, along Snow Road at 62 Woodberrys Lane, is an impressive old four-storey steam-driven brick flour mill. It is listed on the Victorian Heritage Council database which records: "The Oxley Flour Mill was erected in 1861 by William Allen who also operated the first mill in Wangaratta. In 1881, Allen established new premises in Wangaratta close to the vital rail link and sold the old mill to the Woodberry family who have owned it ever since. The four storey structure is constructed of local bricks. The ground floor is surrounded by a timber apron structure. The mill was steam driven. The original brick boiler chimney has been demolished. This is a fine example of the many flour mills erected in Victoria in the nineteenth century and survives from early times. The simple three storey form with its expansive brick walls and encircling timber structure is superbly composed. The simple openings and gables are contributory elements in this composition. The local hand made bricks are distinctive. The mill is an important local landmark and an outstanding historic feature of the area." For more details check out https://vhd.heritagecouncil.vic.gov.au/places/896/download-report.

Milawa Gourmet Ride
A pleasant, flat and easy, 10 km return journey lasting around an hour by bicycle, the Milawa Gourmet Ride passes local cellar doors, farm gates and gourmet food stores. The stores in Milawa have a map of the route and it is possible, as the Visit Victoria website explains, to: "Borrow a bike from Brown Brothers or hire one in Milawa. You can rent a basket to fill with gourmet goodies or deliver the wares to the Milawa Cheese Factory for convenient pick up." Check out https://www.visitvictoria.com/regions/high-country/things-to-do/outdoor-activities/cycling/vv-milawa-gourmet-ride.

* Prior to the arrival of Europeans the area the district was occupied by the Pangerang Aborigines.

* European settlement of the area began in the 1840s.

* In 1858 George Brown, who would go on to create Brown Brothers Milawa Vineyard, had arrived in the district.

* By 1864 the town had a school for children from the surrounding district.

* By 1903 the town had two banks, a police station, two churches, a butter factory and two general stores.

* Today the village is a centre for craft activities, boutique food industries and vineyards - the most famous of which is Brown Brothers.

A comprehensive overview of the region's produce can be found at http://www.milawagourmet.com.au/ 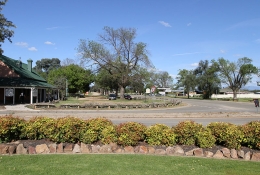 The Crossroads at Milawa 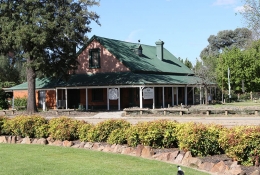 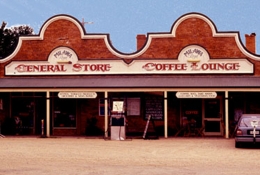 The unusual facade of the General Store at The Crossroads 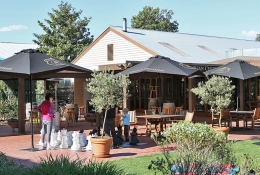 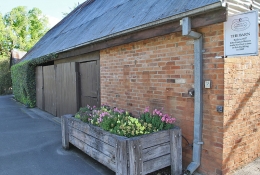 The Barn (1857) where the first Brown Brothers wines were made