Fascinating ghost town on the edge of the desert

Milparinka is a ghost town. It has one pub, a few ruins, some well preserved public buildings of which the Court House is the most impressive, and that is it. In recent times a committed group of volunteers have worked tirelessly to preserve the town's heritage and improve its facilities and services for visitors and the result - the Milparkinka Heritage Precinct - offers a quality experience of a hugely important historic mining town on the edge of the desert. It is best to visit the town during the winter months when there are people at the Visitor Centre. In the summer months when temperatures can reach 50°C and with little reliable water it is an oasis on the road between Broken Hill and Tibooburra. It is worth stopping and exploring because it is a salutary reminder of the sheer hardship of trying to survive in an unforgiving desert.

Milparinka is located 332 km north of Broken Hill via the Silver City Highway, 42 km south of Tibooburra and 1,254 km north-west from Sydney via Cobar and Wilcannia.

It is widely accepted that Milparinka is probably a Wangkumara word meaning 'water may be found here'. It was almost certainly the Aboriginal description of Evelyn Creek - the only permanent and reliable water in the area.

Albert Hotel
The only business remaining in the town is the Albert Hotel in Loftus Street. It dates from 1882 and is a typical outback pub with friendly staff and some very exotic pub games including a game involving a hook and a ring which, when we were there, won a contestant a free beer if he or she could throw the ring onto the hook. Historically there were horse stables out the back and in the 1880s the beer was transported by camel from Resch's Brewery in Wilcannia.

The Milparinka Heritage Trail and Heritage Precinct
There is a brochure available from the pub and the Court House which includes all the town's important heritage sites including the school, the Baker's House, an historic underground water tank and the cemetery. There is a useful website - http://outbacknsw.com.au/milparinka-heritage-precinct.html - which provides additional information on the town.

The following are some of the most interesting buildings in the town.

Milparinka Courthouse - Local History Centre
The Milparinka Courthouse, built of local sandstone in 1886 and designed by the famous colonial architect James Barnet (famed for Bathurst Gaol and the Sydney GPO), has recently (1988 and 2005) been restored and turned into a Local History and Family History Centre. For opening information  tel: (08) 8091 3862 or ring the Albert Hotel. The building uses locally cut sandstone. It cost approximately £2,160 and operated as a local Court of Petty Sessions until 1929. The records show that among the offences before the court were a case of stealing bread from the hotel and letting pigs roam in the main street. When the courthouse closed it became a community hall, was used by the Milparinka Rural Lands Board and briefly became the home of the Milparinka Sporting Club. Today it comprises four rooms with separate rooms devoted to the Aboriginal heritage of the area, the history of Charles Sturt's exploration of the area in his attempt to find the "inland sea" and a room for family history.

Milparinka Police Barracks and Cells
Next to the courthouse in Loftus Street are the old police barracks which date from 1885. Originally it comprised five rooms and was used as a police station and the home for the police (one sergeant and three constables) and their wives. At the back were the cells and an exercise yard. There was a kitchen and laundry nearby. When the goldfields were producing significant quantities of gold the police provided an escort service. There were two square cells of solid sandstone with heavy wooden doors. The station closed in 1930 and became a private residence until it was purchased in 1999. Today it is an art and photographic gallery, gift shop and visitor information centre. The Visitor Information Centre is managed from April until October (when it is cool) by volunteers who travel to the town and donate their time to care for this unique town.

Milparinka Post Office
Although now a ruin with a chimney and little else, this Post Office is part of the 19th century history of the town. It was built in 1901 at a cost of £1,050 and had a very short life. It was reduced to a semi-official post office in 1907 and became non-official in 1917.

Baker's Store
Located just past the courthouse are the ruins of the house the Baker family lived in and the store they operated from 1890 until 1920. It was a vital general store for the local community. All that is left now is the cellar. The Bakers were typical gold prospectors who were prepared to travel anywhere to fossick for gold. Jeremiah and Ellen Baker came to Milparinka from the goldfields at Araluen in New South Wales. Today only the shell of the house remains.

Pastoral Industry Interpretative Centre
Located on the north side of the Heritage Precinct is a shed which has a display which focuses on the pastoral industry in the area. It includes information about the the wool industry, the problems with getting water, the building of fences and pest control.

Exploring the sites relating to Charles Sturt's Expedition of 1845
Beyond the town are a number of sites relating to Sturt's expedition in 1845. Poole's grave and the stone cairn left by Sturt are both on private property and are open to the public courtesy of the owners of Mt Poole Station. The main sites are accessible to the public.

Depot Glen is located 15 km from Milparinka; Poole's Grave is 16 km and Sturt's Cairn is 21 km. These are all reminders of Charles Sturt's 1845 expedition to Central Australia in search of an inland sea. The journey is powerfully recalled in the Whale Boat sculpture at Tibooburra.

Near Mount Poole homestead is a water hole on Preservation Creek known as Depot Glen. It was there that Sturt and his party were forced to camp for six months. They had arrived in the area during a severe drought and could not proceed because of lack of water.  To the north of Depot Creek is the lonely grave of James Poole, Sturt's second-in-command, who died of scurvy. The party buried him under a grevillea tree, carving his initials and the year 1845 into the tree, which still stands. There is also a memorial headstone.

On the top of Mount Poole there is a stone cairn which Sturt had his party build to "give the men occupation". Sturt wrote in his diary "I little thought when I was engaged in that work, that I was erecting Mr Poole's monument, but so it was, that rude structure looks over his lonely grave, and will stand for ages as a record of all we suffered in the dreary region to which we were so long confined." It is worth checking before you travel to the area. The publican at the Albert Hotel will help.

To understand the Sturt expedition better, here is the information on the Tibooburra sculpture. "Myth and Mirage 1999 was created by South Australian sculptor, Anthony Hamilton. The sign beside the sculpture explains its genesis. "In 1843 Captain Charles Sturt held the conviction that Australia's interior was occupied by a central inland sea, not far from the Darling River, believing Eyre's Lake Torrens to be an estuary attached to it. In the following year, leaving from Adelaide, Sturt's well equipped expedition struggled against shimmering horizons in ever increasing hardships, suffering from extremes of heat and the waterless nature of the country in lure of 'any body of water of unknown extent'.

"Sturt's search is believed to have ended somewhere near present day Tibooburra, and it was at Depot Glen, 40 km south west of Tibooburra, that Sturt abandoned the 30-foot, 12-oar whaler boat that had been brought with the expedition (Depot Glen is approximately 12 km from present day Milparinka).

"It is these historical events that artist Anthony Hamilton has drawn on to create the work of art that is placed in Tibooburra. Hamilton has commissioned an exact replica of Sturt's whaler boat that has been suspended upside down between poles several metres above the ground."

"My feeling is that basically it is a land of mirage, and that the inland sea was a fiction, which is why I am mounting the boat upside down, and up in the air, between four poles ... a lot of my work has despair and abandonment in it." Anthony Hamilton.

* For 25,000 years prior to the arrival of Europeans the Wangkumara and Malyangapa Aboriginal people moved  through this area. Middens, quarries, camp sites, ceremonial sites, tool production sites and scarred trees exist in the area and are evidence of Aboriginal occupation.

* In 1845 Charles Sturt and his party (there were 16 men, 11 horses and 30 bullocks) reached the area. They were trying to discover an inland sea. While stranded at Depot Glen, beside Preservation Creek, they explored the corner country, and reached Mount Wood, Cooper Creek and the edge of the Simpson Desert.

* In 1860 Burke and Wills passed through the area on their ill-fated journey from Menindee to the Gulf of Carpentaria.

* In 1861 the land around Milparinka came under the Crown Lands Occupation Act which allowed for land with a carrying capacity of one sheep per every eight acres.

* In 1880 John Thomson, a tank sinker, reached Wilcannia and announced that he had found gold near Mount Poole.

* By February, 1881 other parties were exploring for gold and by June there were 2,000 miners in the area.

* Milparinka became the first permanent settlement on the Albert Goldfields. It was located overlooking a waterhole on the Evelyn Creek. At that time Milparinka was a shanty town of several hundred people living in rough huts and tents. However, local sandstone was available for building purposes and more substantial buildings were constructed.

* By the mid-1880s a mining town had grown up. Through the 1880s the town acquired a newspaper, police office, chemist shop, two butchers, a blacksmith, a photographer, a courthouse (1886), a school (1883), a hospital (1889) and four hotels. At the time it had a population of some hundreds of miners.

* Two other mining towns also grew up in the 1880s.  Albert, which at one time had a population of 900, and Mt Browne which is now nothing more than a few ruins and a cemetery. Gold prospecting at Albert and Mt Browne was complicated by a lack of water. Dry blowing was used and some miners carted their gold bearing dirt to Milparinka and washed it in the Evelyn Creek.

* In 1890 a telegraph office was opened. It connected Milparinka to Sydney

* The diggings were largely abandoned by 1893.

* In 1929 the local Court of Petty Sessions heard its last case.

* Today the town is reduced to some ruins, a small number of well preserved historic buildings, and the Albert pub. They are nurtured by the Milparinka Heritage and Tourism Association.

The famous Family Hotel at Tibooburra has a website with information about Milparinka. Check out http://www.tibooburra.com.au/default.asp?PageID=25 for more information. There is a useful local website. Check out http://outbacknsw.com.au/milparinka-heritage-precinct.html. 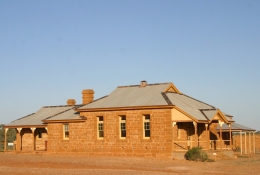 The Court House (1886) in Milparinka in the late afternoon sun. 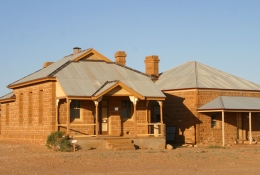 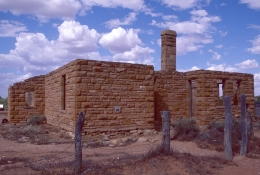 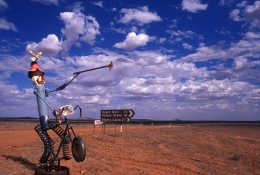 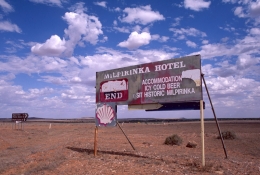 The old sign for the pub with an interesting spelling of Milparinka. (Photo taken 1994)