Attractive, artistic and fashionable town on the ridge inland from the seaside towns of Ulladulla and Mollymook.

There was a time when no one mentioned Milton without twinning it with Ulladulla. The two towns were so close - one on the ridge, one beside the sea - that they had become Milton-Ulladulla in the minds of most visitors. Today Milton has acquired a separate identity. It has attracted artists and alternative lifestyle folk who don't want to live by the sea but want to live in a relatively inexpensive town with interesting inhabitants and an easy proximity to Mollymook, one of the best beaches on the South Coast. Milton's economy was originally driven by fishing, dairying and timber. Today it has become a chic village characterised by gift shops, good restaurants and cafes and well-preserved historic buildings. Unfortunately, like Berry further north, it has not been by-passed and consequently all traffic travelling through the area drives down the main street.

Milton lies 220 km south of Sydney via the Princes Highway.

No one is entirely sure why Milton was named. There is a theory that it is a simple colonial corruption of the English Milltown. Alternatively it is argued that it was named after the great 17th-century English poet, John Milton. It was either named by the town's first postmaster, George Knight, or by John Booth who created a private township on part of his 80 acre (32 ha) farm. There is a rather romantic story that Booth saw a copy of Milton's Paradise Lost in his library and was suitably inspired.

Exploring Historic Milton
The most sensible way to explore historic Milton is to get Your Walking Guide to Historic Milton compiled by Sue Curran, a single A5 brochure which lists a total 25 places of interest all of which are, with only three exceptions, either on the Princes Highway or on Wasson Street. It is available from the Visitor Information Centre in Ulladulla. Some of the town's most interesting buildings include:

(No.1) The Milton Library - which was built by public subscription as the local School of Arts in 1871. It is a handsome building on the Princes Highway beside the Milton Theatre.

(No.5) Times Past Bed and Breakfast - a charming cottage which was built around 1890. It was originally the homestead of the dairy farm which supplied the town's milk.

(No.6) Wesleyan Methodist Manse - standing at the top of the main street on the corner of Thomas Street it was a gift to the church from ex-convict Henry Claydon. The church later sold the building as they thought it too ostentatious. The triangular plot to the west of the house contains some graves, one of which belongs to Joseph Whatman, the first settler on the site of Milton. The rear balcony was used for binocular surveillance of the coast during World War II.

(No.9) The Court House and Old Police Station - both date from 1877 and are an impressive part of the townscape. If you look carefully at the Court House you will notice that it is somewhat unusual being asymmetrical rather than symmetrical.

(No.11)  The Settlement - was the centre of the town from earliest times. It was originally established as the Post Office Stores in 1860. The stores were purchased by John Kendall in 1874 and run by his son-in-law, Henry Carrington Blackburn. After Kendall died Blackburn demolished the original store and built 'The Popular' Store (1898) which, at the time, was one of the largest stores on the south coast. The Settlement Courtyard, with its specialty shops, now occupies the space where the original storeroom and stock feed barn were located.

(No.12) Victorian National Bank - built in 1870 and now a cafe named Coastal Indulgence it is a particularly elegant building. Behind it is the Village Green courtyard complete with an old pump and a number of specialty shops.

(No.13) Anglican Church of St Peter and St Paul - designed in a Gothic style it was completed in 1860, although it was not consecrated for many years owing to unpaid debts. The foundation stone was laid by John Kendall. Many believe that the Chinese Elm Tree in the grounds is the oldest in Australia, being planted by Alice Kendall when she returned from missionary work in China in 1920.

(No. 15) The Cottage - 'The Cottage', currently the Milton Medical Centre, was built in the 1870s. It is a typical Victorian villa with high ceilings and a simple graciousness. There is an old pump and a well behind the building.

(No. 16 & 17) Melrose and the Lighthouse Keeper's Cottage - Now known as the Milton Lighthouse Medical Practice, this old lighthouse keeper's cottage is well hidden by a hedge. When the lighthouse was mechanised in the 1920s the cottage was dismantled and removed by bullock cart from Warden Head. 'Melrose', on the opposite corner, was originally a farm belonging to Walter and Amelia Alice Kendall.

(No. 18) Heritage Bakery - On the corner of the Princes Highway and Croobyar Road is the Heritage Bakery, an elegant two-storey structure. Built around 1887 by William Riley and his six sons it  was originally a substantial general store. The balcony, which gives the building much of its contemporary charm, was added at a later date.

(No. 19) Uniting Church - the present Uniting Church was built in 1872 as the local Congregational Church. Gothic in its architectural style it is decorated with quoins, cathedral glass windows and facings of hewn stone. The manse was built 1875 and was used as a school from 1899-1908.

St Mary's Star of the Sea Catholic Church
Located at 41 Corks Lane, St Mary's Star of the Sea Catholic Church stands on a hill overlooking the northern entrance to Milton. It was opened in 1891 although, at the time, no foundation stone or memorial plaque was included on the building. There is very little information about the church apart from a weather vane tht was established in memory of Alf Martin who died in 1980 and a Lone pine in the grounds which was donated at Anthony Gallaher in 2006.

Lake Conjola and Fishermans Paradise
Lake Conjola is a large lake which lies to the north of Milton. It is thought the name comes from a Yuin Aboriginal word 'Kongoola' which was the name of a fish which could be found in the lake. The lake is a classic South Coast "get away from it all" retreat for holidaymakers, sea changers and retirees whose idea of heaven involves boating (there are boat ramps at the two towns - Lake Conjola and the amusingly named Fishermans Paradise), sailing, water skiing and safe swimming.  Bream, flathead, whiting, tailor, and blackfish can all be found in the lake. Access to the town of Lake Conjola is via Lake Conjola Entrance Road which heads east from the Princes Highway 6 km north of Milton and access to Fishermans Paradise is a few kilometres further north on Alma Road.

Pointers Gap
1.4 km north of Lake Conjola Entrance Road on the Princes Highway, and heading west, is a scenic drive on Pointers Gap Road which leads up to Pointers Gap Lookout which is on the edge of the  McDonald State Forest at the top of the escarpment. It offers panoramic views of Lake Conjola and the beaches south of Burrill Lake. The whole area, particularly the heathland, is particularly beautiful when the wildflowers are blooming in the spring and summer.

Mollymook and Rick Stein at Bannisters
Five kilometres from Milton, via Matron Porter Road, is one of the best restaurants on the NSW South Coast - Rick Stein at Bannisters. It specialises in seafood and offers a reasonably priced menu (compared to Sydney prices) which ranges from French through Indian and Malaysian to Modern Australian with heavy hints of Asia. Also Mollymook (see https://www.aussietowns.com.au/town/mollymook-nsw) has one of the best beaches on the South Coast - arguably on the whole of the east coast.

* Prior to European settlement the area was occupied, for an estimated 20,000 years, by the Yuin Aborigines.

* Captain Cook sailed up the coast  in 1770 and noted, at Bawley Point, south of Milton, indigenous people who 'appeared to be of a black or very dark colour'. He named Pigeon House Mountain on April 21, 1770 recording in his journal what he described as  'a remarkable peaked hill, which resembled a square dove-house, with a dome at the top, and which for that reason I called the Pigeon House'.

* In 1827 the first land grant was issued to Reverend Thomas Kendall (1778-1832) who settled north of the present township of Milton. Kendall ran cattle and felled timber using ticket-of-leave men for labour. He called his property 'Kendall Dale'.

* In 1839 Kendall's grandson Henry Kendall, who became one of Australia's most famous poets, was born on the estate.

* The town's first name was 'The Settlement'. This 'settlement' grew on what is the site of present-day Milton. The area around The Settlement was soon occupied by farmers.

* In 1859 John Booth (he was a business partner of the department store owner, Anthony Hordern) purchased the 80 acre (32 ha) Myrtle Farm for £240 and subdivided it into 62 allotments. He developed a private town which was probably named Milton by George Knight, the local postmaster. That same year the foundation stone was laid at the Anglican Church of St Peter and St Paul.

* During the 1860s the district developed a reputation for mixed farming with dairying, wheat-growing (it was short lived and was destroyed when 'wheat rust' hit the south coast), pig-rearing, honey and vegetable-cultivation. A tannery was established at Millards Creek and silica and quartzite were mined and loaded on a wharf at Bannister Point, north of Mollymook.

* In 1862, as a result of a public subscription, the first volume of Henry Kendall's poetry, Poems and Songs, was published.

* The Congregational Church (now the Uniting Church) was erected in 1872.

The nearest Visitor Information Centre is at Ulladulla. It is located opposite the harbour at the Civic Centre, Princes Highway Ulladulla 2539, tel: 02 4455 1269.

Surprisingly Milton lacks a good, comprehensive local website. The best available is the Ulladulla website with the Milton entry. Check out http://www.ulladulla.info/milton 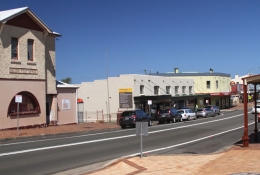 The main street of Milton 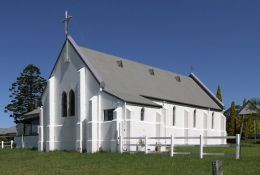 St Mary's Star of the Sea Catholic Church at the northern end of the town. 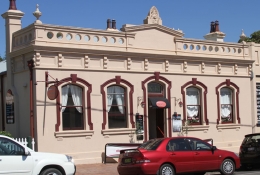 The elegant Victorian National Bank (1870) in the main street is now one of the town's best cafes. 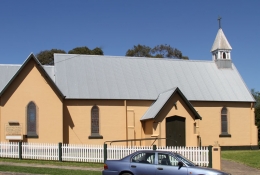 The Anglican Church of St Peter and St Paul in the main street dates from 1860. 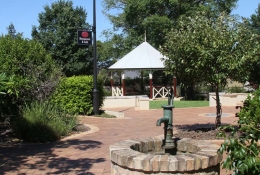 The space behind the Village Green is a cool, charming respite from the main street. 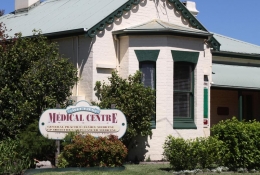 The Cottage, dating from the 1870s, in Milton's main street. 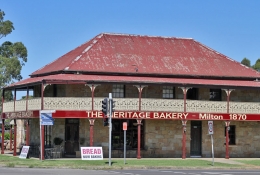 Originally a substantial store built in 1887, the Heritage Bakery now dominates the southern end of the town.