Mingenew is a typical northern wheatbelt town with a railway line, a bulk handling wheat facility (the largest in Australia), a single pub, a couple of service stations and a caravan park. Today the economy of the area is dominated by sheep, wheat and lupins. The town services the needs of the surrounding area.

Wheat Sculpture
Located in Cecil Newton Park on Midlands Road, the Wheat Sculpture was erected as a Centenary of Federation Project and depicts the importance of wheat farming in the area. It celebrates the fact that Mingenew is known as The Grain Centre. The Mingenew grain facility (CBH, Co-operative Bulk Handling) is recognised as the largest inland grower fed receival site facility in the Southern Hemisphere, with a holding capacity of 403,000 tons. The sculpture was designed by Robert Hitchcock and formally dedicated on 13 October, 2001. A century after federation.

Glacial Boulder
Located in Cecil Newton Park on Midlands Road, the boulder is a strange addition to the town's attractions. The plaque explains: "This boulder was dropped from a melting iceberg during the early Permian Ice Age about 280 million years ago. At that time the Mingenew area lay beneath the sea and most of Australia was covered by a continental ice sheet similar to that covering Antarctica today. It was collected from a glacial boulder bed in the Nangetty hills 20 km north of Mingenew."

Mingenew Hotel
The Mingenew Hotel is now the only hotel in the town. It has operated at the site in Midlands Road since 1908 although the original Commercial Hotel was a single storey mud brick building owned by Samuel James Philips and operated by William Henry Linthome. The building was altered in 1908 when it was replaced by the current building although the front verandas and balconies were removed in the 1970s.

Church of St Joseph
The local Roman Catholic Church is located at 30 William Street. Amusingly it declares that it was built in 1908 although it was actually built in 1903. The original 1903 foundation stone was covered over by subsequent additions.

Mingenew Museum
The town's Museum, located in Victoria Street opposite the Shire Offices, is housed in the original Mingenew Government school (1894) contains two spacious classrooms, a store room and scullery -all opening onto a north facing veranda. The museum contains a small collection of local Aboriginal artefacts, photographs, curios owned around the district and a telephone exchange switchboard. The museum also has two machinery sheds housing farming machinery and implements It is open from 9.00 am - noon and by request. Tel: (08) 9928 1321.

Mingenew Hill
Visitors to the town should start by going to Mingenew Hill (it can be accessed from the Mingenew-Morowa Road and is clearly signposted Scenic Drive - Mingenew Hill) which offers an excellent panoramic views over the town and the surrounding countryside. It is also an excellent place to see wildflowers in season.

Depot Hill
Depot Hill is located 12 km north-west of Mingenew (take the Mullewa Road and turn west at Depot Hill Road) on a bend of the Irwin River. It was named by the Gregory Brothers in 1846 for the simple reason that it was where they buried supplies. In the 19th century was used by explorers, travellers and coal prospectors and subsequently became a stock grazing common and holding area with year-round water on the stock route north. It was used as a gunnery and firing range during World War II and today is a popular local haunt. Like Mingenew Hill it is a remnant of the Victoria Plateau which has been dissected and eroded by the Irwin River so that now only rocky outcrops remain. It is particularly impressive during the wildflower season and is known as a place where the Bird Beak Hakea (Hakea Orthorrhyncha) grows. For more information check out http://inherit.stateheritage.wa.gov.au/Public/Inventory/Details/5ba74966-3b4b-4c09-93a1-e6940ecf0628.

Coalseam Conservation Park
Located 32 km north east (Coalseam Road runs off the Morowa Road) the Coalseam Conservation Park is known for its displays of native pink and white everlastings (Rhodanthe chlorocephala ss. rosea) and yellow pom pom (Cephalipterum drummondii) wildflowers. The area was named the Coalseam after the Gregory brothers discovered coal on the banks of the Irwin River in 1846. This was the first discovery of coal in Western Australia. A number of shafts were dug but only narrow seams of poor quality coal were found. Today the park is a popular picnic place. It also has marine fossils embedded in the riverbank and impressive limestone cliffs which date from the Permian Ice Age, 250 million years ago.

How to See WA Wildflowers - A Guide
When planning a trip there are a number of very simple rules.
(1) Start by downloading Your Holiday Guide to Western Australia’s Wildflowers at http://www.westernaustralia.com/en/things_to_do/forest_and_flowers/pages/wawildflowers.aspx#/. It is a comprehensive guide to the wildflowers. There are over 12,000 species and 60% of them are found nowhere else on the planet.
(2) There is a tendency to say "But I won't know what I'm looking at" but that is rubbish. There are a number of great books and the best, by far, is the answer to "Wildflowers for Dummies" titled "Colour Guide to Spring Wildflowers of Western Australia". It is privately published by Wajon Publishing Company, written by Eddie Wajon, and comes in three volumes – 1. Kalbarri and the Goldfields, 2. Perth and the Southwest and 3. Esperance and the Wheatbelt. They can all be purchased online from Kings Park & Botanic Garden in Perth. Check out https://www.aspectsofkingspark.com.au.
The publication's design masterstroke is that the flowers are listed according to their colours and all the pages are colour coded. Thus Mr and Mrs Wildflower Illiterate, when gazing at a Spiny Synaphea, only need to open at the "yellow flowers" section and flick through until they find the colour photo which matches the reality. The company can be contacted directly on (08) 9310 2936.
(3) No one should ever underestimate the power of local knowledge and assistance. The Western Australian wheatbelt, probably because of the declining prices for both wool and wheat and the increased levels of salinity, has decided that the spring wildflowers are a good for the local economy and worthy of patronage. When innocently asking where I might see a wreath flower (they are a flower which naturally forms itself in a circle like a wreath – particularly appealing to those with a morbid interest in death) at the local coffee shop in Morowa I was told that there were some in the area but the person who knew was at the information office.
At the information office I was advised, and this is verbatim, to "drive down the main street until you see the road that crosses over the railway line, drive across the line and past the Police Station and Fire Station (or is it the SES), turn right at the next road, continue up past the sheds for a couple of hundred yards [metres haven't arrived here yet] and you'll see some beside the road". Absorbing the instructions I headed off and three minutes later, having noticed a sign reading "Wreath Flowers" on a fence, I found the plant.
Morowa also publish a leaflet titled "Morowa Wildflower Drives" which, if you were thorough, could keep you in the area for a couple of days.
At Mingenew the information centre provides both a map and a list of locations with details like "20 km on the Pingelly road on the left hand side there are some excellent wreath flowers". And at Watheroo there's a wonderful local mud map with wryly enthusiastic comments like "Heaps of banksia, grevillea, snake bush etc along the road" and, getting quite technical "Rare and Endangered. E. Rhodantha (rose mallee) Only large patch in the world".
(4) There is a logical route which can be honed or expanded according to the amount of time you want to spend.
The best starting place, if you want to get a good foretaste of what you are about to experience in the wild, is to visit Kings Park & Botanic Garden in the heart of Perth. Apart from offering sensational views over the Swan River and the Perth CBD the gardens boast a 17 hectare area which has more than 1700 native species of wildflowers. This is, not surprisingly, rather pristine and not very wild but it does allow you to develop a working knowledge of devils pins, kangaroo paws, desert peas, everlastings, starflowers, grevilleas, firebush, a range of orchids and hundreds of other natives.
You really don't need to be a flora expert. All you need are your eyes and a sense of wonder because the Western Australian wildflowers in spring really are as remarkable and significant as a unique part of Australia as Uluru, the Great Ocean Road or Cradle Mountain.

There is a very useful local website. Check out http://mingenew.wa.au. 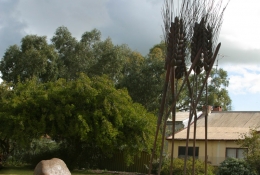 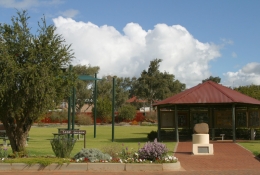 The Glacial Rock in the Cecil Newton Park. 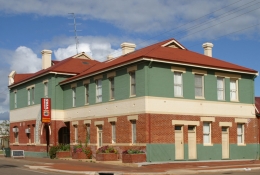 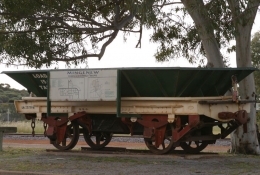 A old rail truck in the main street. 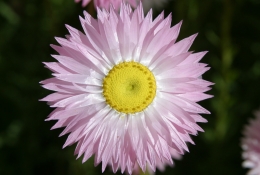 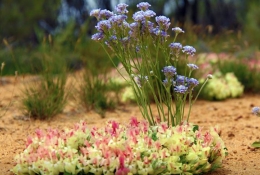 A wreath flower - a unique rarity during the wildflower season.