Service town on the Yorke Peninsula known as the 'Barley Capital of the World".

Minlaton is a service centre surrounded by sheep and wheat farms in the heart of the Yorke Peninsula. It is a functional service town with the only major attraction being the beautifully preserved "Red Devil", a monoplane flown by local World War I ace pilot, Captain Harry Butler.

Minlaton, a service centre on the Yorke Peninsula, is located 200 km west of Adelaide via the Princes and Yorke Highway. It is 88 m above sea level.

The town's first name was Gum Flats because of the red gums growing in the area. This was changed to Minlaton which was reputedly derived from a Narangga word "minlacowrie" which probably meant "sweet water".

Minlaton Museum
Located at 16a Main Street, the National Trust Minlaton Museum is a typical small, rural museum with a range of domestic and rural memorabilia and a special room devoted to the exploits of local aviation hero, Captain Harry Butler. It is open Tuesday to Saturday 9.30 am - 1.00 pm, Saturday 9.30 am - noon subject to the availability of volunteers, tel: (08) 8853 2027. Check out http://www.nationaltrust.org.au/sa/minlaton-museum

Captain Harry Butler Memorial
Located at one end of Minlaton's main street is the town's main attraction, the Captain Harry Butler Memorial with its perfectly preserved Red Devil. Butler was born at Yorketown Hospital in 1889. In 1915 Butler, who had been obsessed with aeroplanes since childhood, paid to travel to England where he joined the Royal Flying Corps as an aircraft mechanic. He managed to move quickly from engineer to pilot and started flying over France with British fighter squadrons. He studied the German tactics and by the end of the war had trained some 2,700 students to fly. The brochure available at Harvest Corner takes up the story: "On 6 August 1919, Harry Butler came home in his Bristol M.1C monoplane, affectionately named the 'Red Devil'. He was the first man to fly across Gulf St Vincent to Yorke Peninsula. With an inflated tyre tube around his waist as a safety precaution in case he had to ditch the tiny plane, Captain Harry Butler carried with him a 40 lb (18 kg) mailbag of postcards and letters for delivery to Minlaton - believed to be the first airmail over water in the southern hemisphere. As he approached, Harry Butler and his 'Red Devil' were welcomed by 6,000 well wishers, many curious for their first glimpse of an aircraft ... he was responsible for the first aerial photograph ever produced and published in South Australia ... on 23 August, 1919 he gave a dazzling display of flying at Unley. A captivated crowd of 20,000 gasped at his skill and pluck in aerobatics and spectacular manoeuvres."

The Red Devil was modified in 1931 and fitted with 110 horsepower De Havilland Gypsy engine. It was last flown in 1945. It is believed that approximately 200 of these Bristol monoplanes were manufactured and this plane is the only one of this type in existence anywhere in the world. It was hastily designed by the British government in 1916 to meet the need for a fast, single seat fighter aeroplane with the greatest possible fire power. It has a speed of 209 km/hr or 130 m.p.h and was designed by Frank Barnwell for the British and Colonial Aeroplane Company.

* Prior to European settlement the Narangga Aborigines had lived in the Minlaton area for tens of thousands of years.

* The area around Minlaton was settled by farmers in the 1870s. It was recognised as ideal for wheat and barley growing and sheep grazing.

* As the town started to develop it became known as Gum Flats because of the large number of red gums growing in the area.

* In 1919 Harry Butler flew from Adelaide to Minlaton, the first over water flight in the southern hemisphere.

* In 1922 Butler crashed near Minlaton and he retired from flying.

* Today Minlaton promotes itself as 'The Barley Capital of the World'.

There is no local website for Minlaton. South Australian Tourism has a short entry at http://www.southaustralia.com/info.aspx?id=9006047 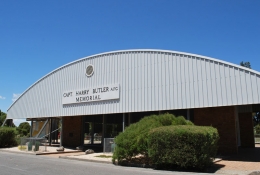 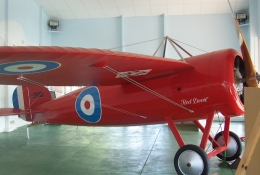