Minyip is a quiet service town in the Wimmera which, because it has remained largely unchanged, was an ideal setting for The Flying Doctors TV series. Today there are a number of untouched historic buildings the most significant of which is the remarkably beautiful St John's Lutheran church.

Minyip is located 309 km north-west of Melbourne via Ararat and Stawell.

It is claimed that 'minyip' meant 'ashes' in the language of the local Aborigines.

St John's Lutheran Church
St John's Lutheran Church at 36-38 Church Street is a beautiful timber building with an interesting history. German Lutherans, who had emigrated from Prussia to the Barossa Valley region of South Australia and become experts in dry land farming, moved into the Minyip district in the early 1870s. The first Lutheran church service was held in the home of a Mr Price in 1874 and a wooden church was built in the tiny village of Kirchheim (it means church home in German) in 1875. A school in a simple wattle and daub hut was established in the same year. In 1889 a violent storm destroyed the church and the school. Both were rebuilt in Kirchheim later that year. The church remained in Kirchheim until 1935 when it was moved to its present site in Minyip. This was a major achievement. It took three days for a steam traction engine (it was brought from Ballarat at a cost of £210) to move the church the 6km. It was estimated that the building weighed 50 tons. On the way it very nearly toppled over when the weight of the church caused a rabbit warren to collapse. The church has a simple Gothic design which retains its fine octagonal steeple with belfry (the bell was cast in Germany in 1889); a 300 pipe organ built in 1890; stained-glass lancet windows and a chandelier which was brought from Germany in 1897. Historically men sat on one side of the church and women on the other. This no longer occurs.

Historic Buildings - Main Street
It is worth walking down the main street of Minyip. There are a number of interesting historic buildings which have remained largely untouched. The local courthouse dates from 1886; the local newspaper building where the The Guardian was published dates from 1885 (it is now owned by the local historical society); and both The Club Hotel (1907) which was featured in the The Flying Doctors and the Commercial Hotel (1908) date from Edwardian times and are characterised by attractive wrought-iron lacework and leadlight windows.

*The first European to explore the area was Major Thomas Mitchell in 1836 who noted of the land around Minyip that it was “Ready for the immediate reception of civilized man and destined perhaps to become a portion of a great empire.”

* Squatters moved into the area after the goldrushes.

* the township was established in the 1870s, blocks of land were sold in 1875 to former gold miners and German settlers from South Australia.

* The town became a railhead for wheat farmers in 1886 when the railway arrived from Murtoa.

* Minyip achieved fame when it became the setting for the TV series 'The Flying Doctors' in 1984.

There is no visitor information centre in the town.

There is a free camping ground with excellent amenities. 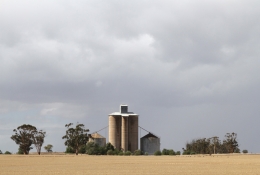 Grain silos on the horizon near Minyip 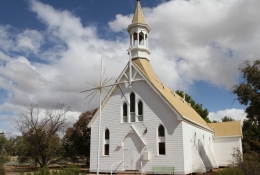 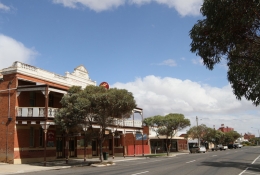 The main street of Minyip 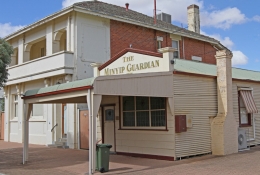 The Minyip Guardian building in the main street of Minyip