Mirboo North is an attractive rural service centre which started life as a timber town with timber workers cutting down the huge blackwood forests on the surrounding hills. Today it is a destination for people wanting to explore the beautiful Strzelecki Ranges which are known for their tall eucalypts, cool temperate rainforests and fern gullies. There are driving tours and the Grand Ridge Rail Trail is an opportunity to walk or cycle through the forests.

Mirboo North is located 156 km south-east of Melbourne via the Princes Highway to Trafalgar.

"Mirboo" is a local Aboriginal word meaning "kidney". The "North" was added because the original town of Mirboo, which had been surveyed in 1878, was located on a branch of the Tarwin River, about 12 km south of the current town.

Murals
The town has illustrated the history of the district with a number of murals which are spread throughout the town.

Historic Markers
There is a very simple way to learn about the history of Mirboo North. There are a number of excellent, and very detailed, placards around town which tell the stories of buildings, people and places from the past.
A typical example is the plaque outside the Colonial Bank of Australasia which records:
"This Colonial Bank of Australasia building was established in 1907 being built almost entirely with wood at a time when timber was abundant in this area. The Bank Chambers were fitted out in red pine and silky oak, with ceilings lined throughout with pressed metal. The strongroom was built twelve feet by seven feet with eighteen inch thick walls of reinforced concrete with a solid steel door. The residential quarters for the Bank Manager at the rear of the building were finished with equal quality to match the banking chambers. The original balustrade and finials were removed from the top leaving the building you see today. It was in 1918 that the Colonial Bank amalgamated with the National Bank of Australia. The Mirboo North branch continued until 1978 when it was downgraded to an agency and finally closed its doors in March 1994."
The Historic Markers include - CWA Park, the Colonial Bank, Police Station, Tailor Shop, Club Hotel, Shops in the main street, Pioneer Store, Post Office and a Street Scene from 1900.

Grand Ridge Road
Promoted as one of Victoria's most impressive drives, this 132 km road traverses the ridge along the Strzelecki Ranges and passes through picturesque fern gullies, farmlands and bushland reserves as well as cool temperate rainforests. Mirboo North is known as the capital of the Grand Ridge Road.
To the south it goes to the Tarra Bulga National Park and to the north is makes its way to Mount Worth State Park. In late spring, the purple and gold Mirboo Lily, the town's floral emblem, blooms at the reserve along the route. To visit the fern gullies, the wallabies, wombats, echidnas and lyrebirds of Hallston Bush, continue along Grand Ridge Road and head towards Hallston. If you continue along Grand Ridge Road, you will reach Mt Worth State Park. Some pioneers' graves can be found in a small hillside cemetery at Allambee South, seven kilometres east of Hallston. The map of the route can be downloaded at http://www.visitlatrobevalley.com/pages/the-grand-ridge-road.

Lyrebird Forest Reserve
The Lyrebird Forest Reserve, which is located 3.3 km north of Mirboo North on the Strzelecki Highway, has a 4.8 km walking track which winds from the picnic area along the Little Morwell River, through forests of stringy-barks, grey gum, banksia and king-fern, which are home to lyrebirds, crimson rosellas and yellow-tailed black cockatoos.

* The area around Mirboo North was first traversed by explorer, Paul Strzelecki, in 1840.

* It was not until the 1880s that settlers in search of new land moved south into the area. The plentiful forests of mountain ash proved tempting for timber getters.

* In 1894 Mirboo North became the main town in the shire.

* After World War II Italian prisoners of war took up farms in the district.

* The Grand Ridge Rail Trail was closed after serious bushfires in 2009. Two bridges along the route were destroyed.

* The Grand Ridge Rail Trail was officially reopened in February, 2012.

* Today, Mirboo North relies upon dairying, and the cultivation of potatoes, maize and onions as well as the Grand Ridge brewery.

There is a useful local website. Check out http://www.visitmirboonorth.com.au for accommodation and dining. 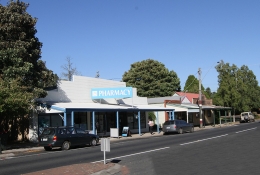 The main street of Mirboo North 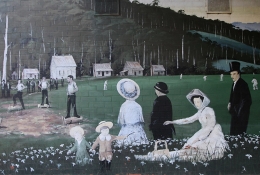 A mural depicting wood chopping, cricket and picnicing at the local oval 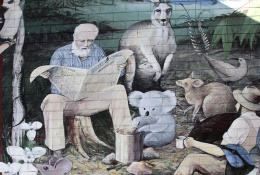 A mural in the heart of the town 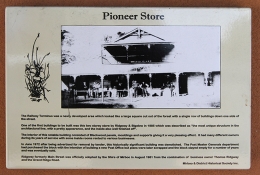 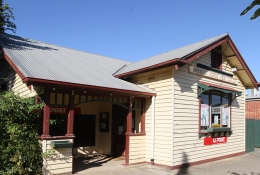