Popular holiday and resort town on the Cassowary Coast.

Mission Beach is a series of interconnected villages - South Mission Beach, Wongaling Beach, Mission Beach, Bingal Bay, Brooks Beach, Carmoo and Garners Beach - a 14 km beach on one side, and the World Heritage Tropical Rainforest on the other side. Thoughtful promotion has turned these sleepy villages into a desirable holiday resort destination. The road leading to the beachside suburbs is known as Cassowary Drive because the district is home to the beautiful bird, the Cassowary. Mission Beach's claim to fame is that it is one of the last areas on the north Queensland coast where tropical rainforest actually reaches down to the shoreline. The rainforest is the habitat not only of the elusive cassowary but of parrots, wallabies and impressive butterflies.

Mission Beach was named after the Hull River Mission, an Aboriginal mission which was set up at South Mission Beach by the Queensland government in 1914 to house the remainder of the local indigenous population. In 1918 the mission was destroyed and lives were lost when a cyclone ripped through the area. This has been corrected by Briuan ‘Poachie’ Bywater MBVIC Tour Guide. He points out that "There was never a Mission at the Hull River. The one referred to is The Hull River Aboriginal Settlement, never a Mission. The Settlement was started in 1914, completed in 1916 and destroyed by the Innisfail cyclone in 1918 with the Aboriginals who could be found transferred to Palm Island. The area was originally called Kenny after the surveyor John Kenny who supervised the building of the Settlement. This was not acceptable to the locals who had always referred to it as Mission Beach. The origin of the name is a mystery, perhaps the only clue is the nickname given to John Kenny, The Reverend. He and his daughter were killed by flying debris in the 1918 cyclone. Don’t stress too much, our local Council have erected directional signs all pointing to the Mission site. The 14 Missions in Qld at that time were all run by religious organisations, the Settlement at Mission Beach was a Government initiative."

* Cutten Brothers Walking Track
Located between Narrogon Beach (the Perry Harvey Jetty) and the Ulysses Link Walking Track the track traverses a particularly beautiful section of remnant rainforest. There are endangered arenga palms, king ferns and, if you are lucky, you might see cassowaries and you will see exotic tropical birds.

* Kennedy Walking Track
Starting near the South Mission Beach boat ramp this coastal trail is 4 km long and "The track cuts through a wide variety of coastal rainforests to get to beaches and rocky headlands. It offers great views of the Family Group of Islands and the chance to see cassowaries, wallabies and other rainforest animals. Peer down into the ocean from lookout points to spot turtles, dugongs and dolphins. The Kennedy Walking Track takes you from South Mission to Kennedy Bay, past the landing place of 1840 explorer Edmund Beasley Court Kennedy. If you have the time you can then walk the length of Kennedy Bay along the beach to finish at the Hull River. The communities of Hull and Tully Heads are on the other side. Return is via the same pathway. This trail is suitable for a wide range of walkers, although the second half includes more stairs and a bit of rock-hopping. There is a wide boardwalk to the first beach, known as  Lover's Beach."

Big Cassowary
Located outside the shopping village at Wongaling Beach, this Big Cassowary was built by Darryl Lourigan, the owner of the Alamo Service Station which previously occupied the site. Lourigan claimed that before Mission Beach because a tourist destination the cassowarys in the area used to wander into the service station looking for food. The original Big Cassowary had two small brown chicks but they were demolished along with the service station to make way for the shopping village.

Sighting a Cassowary
Like all wild animals there is no guarantee of seeing a cassowary. These big, flightless birds are now endangered and while Mission Beach reputedly has the greatest concentration of the creatures it is still estimated that there are only around 100 adults in the area.

Activities in the area
Mission Beach is primarily a destination for holiday and adventure activities. White-water rafting, sailing, charter boats, a water taxi across to Dunk Island, kayaking parachuting, sky diving, scuba diving and organised cruises are available locally. If you are interested in these activities check out http://www.missionbeachtourism.com/tours which connects to all the major activities in the area.

Mission Beach Dunk Island Water Taxi
Dunk Island, savagely damaged by recent cyclones, is only 4 km away. The water taxi, which used to ferry holidaymakers to the island's resort, now operates daily and takes only 10 minutes to reach the island. The Water Taxi website eulogises the island "Renowned the world over as a unique tropical rainforest island, Dunk Island offers the day visitor beautiful walking tracks, breathtaking scenery,views and great snorkelling and camping facilities and best of all the all new 'Sunset Bar'!  Open Fridays, Saturdays, Sundays, Long Weekends and all School Holidays from 10 am onwards, this is a perfect spot to have a bite to eat and a cold drink with the sand between your toes." Check out http://www.missionbeachwatertaxi.com for details and prices. The Dunk Island resort is currently closed due to cyclone damage.

Clump Point
Lying to the north of Mission Beach, and offering an excellent vantage point for views across to Dunk Island, is Clump Point. The Point is an important place for the local Djiru people and the sign on the headland, which welcomes visitors to Djiru country, points out that "The Clump Point area has always been a significant place for our people, for its cultural, spiritual, social, educational and recreational values. It is a place where our ancestors have met with other groups, held ceremonies, fished, hunted, camped and collected resources for thousands of years. To us, our culture, spirituality and country are one and our identity is connected to this place.
"Clump Point is an important part of our tribal country that includes story places, hunting and fishing grounds, waterholes, ceremonial, camp and burial sites. These sites remain today as reminders of the long term occupation of the area by our people.
"The Kangaroo grass, called bulmban, here on the point, was used to make bedding in the early days. The grassland is also considered significant for its environmental values. Clump Point is the only place in the Wet Tropics where kangaroo grasslands are found on basalt soils, and the only place where basalt soils reach the sea.
"Clump Point also supports a unique complex mesophyll vine forest, the only example of this type of forest on the Wet Tropical coast."

* Prior to the arrival of Europeans the area was occupied by people from the Djiru Aboriginal language group.

* The area was first explored by Edmund Kennedy and his party who landed just to the south of Mission Beach in 1848.

* In 1872 a vessel named Maria was wrecked and some of the sailors were killed (and reputedly eaten) by the local Aborigines.

* In 1873 George Dalrymple explored the coast and wrote admiringly of the agricultural potential.

* The first white settlers, the Cutten brothers, arrived in 1882 and established crops including coffee, mangoes, coconuts and bananas.

* The area got its name from an Aboriginal mission, the Hull River Mission, which was set up at South Mission Beach by the Queensland government in 1914.

* A major cyclone swept the area in 1918, bringing with it tidal waves and floods. The mission was destroyed and lives were lost. The Aborigines were moved to Palm Island.

* The first roads through the area were not built until the 1920s.

* In the 1930s the Family Islands became home to an artist community.

* In 1936 a road between El Arish and Bingal Bay was completed.

* In 1939 the township of Mission Beach was surveyed. It was named Kenny.

* The Mission Beach State School was built in 1953.

* In 1965 Perry Harvey became the first person to introduce snorkel tours to the Great Barrier Reef.

* By the 1980s Mission Beach had become an important tourist destination.

* On 20 March, 2006 Cyclone Larry caused extensive damage to the town.

There are a number of useful websites including http://www.cassowarycoast.qld.gov.au and http://www.missionbeachtourism.com. 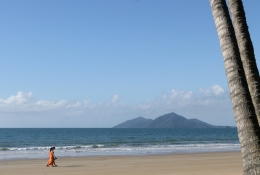 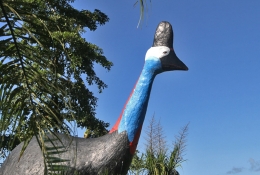 The Big Cassowary outside the local shopping centre. 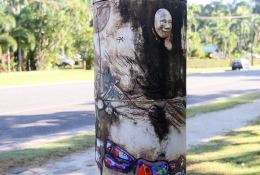 Near the Visitor Information are a number of public art works along the Promenade. 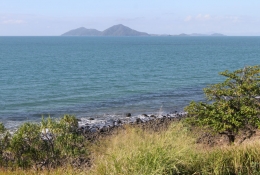 The view across to Dunk Island from Clump Point. 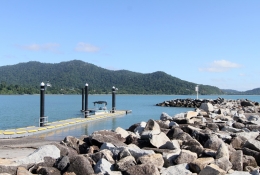 The view from the boat ramp at Clump Point across to Narragon Beach.