Mitta Mitta is a small rural hamlet in the Mitta Valley nestled between Mount Misery and Mount Welcome. Its charm is based on the quiet beauty of the valley where fishing, bushwalking, fossicking for gold, visiting the old gold mining sites and simply relaxing are the prime attractions.

Mitta Mitta is located on the Omeo Highway 383 km north east of Melbourne via Wangaratta and Beechworth.

It is claimed that "Mitta Mitta" is a corruption of "Mutta Mutta" which meant "thunder" in the language of the Aborigines who travelled through the area in the summer months to feast on bogong moths which were abundant in the Snowy Mountains. There is an alternative version which says the term was used to describe a "small area of water or a place where reeds grow". This argues that "mida-modunga" means "where reeds grow".

Walking Tracks of Mitta Mitta
At the front of the Historic Reserve is an excellent sign (a map and detailed text) giving information of the five main walks around town. There is a brochure describing the walks which can be obtained from the Mitta Mitta General Store.
The five walks:
* River Walk - 2.8 km - easy walk - around 90 minutes return. The walk follows the Mitta Mitta River to the Mill Picnic Area which is where the town's old saw mill once operated. The walk is genuinely beautiful
* Deep Gully Walk - 2.2 km - moderate difficulty - about one hour. It is naturally combined with the River Walk and heads away from the river into a gully noted for its temperate rainforest.
* Upper Pioneer Trail - 3.5 km - moderate difficulty - 2 hours. It passes through a stand of impressive Brittle gum and offers excellent views of the entire Mitta Valley and the Pioneer Mine. It climbs to the Mount Welcome Hike trail and drops back to the Historic Reserve.
* Mount Welcome Hike - 8 km - a hard walk - around 5.5 hours. This track climbs to the top of Mount Welcome where there are exceptional views of the Mitta Mitta Valley and the surrounding countryside.
* Pioneer Mine Walk - 1.5 km - easy - 45 minutes return. It is located off a road over the main road from the Heritage Park. The Pioneer Mine was once the largest open cut gold mine in the State. It operated from 1859-1913. Hydraulic sluicing using water jets were used to hose down the walls and to uncover the gold left by an earlier diversion of the river. A walking track within the base of the mine uses steps and boardwalks to complete a circuit. As well as mining artefacts and tunnels, look out for the peregrine falcons that nest on the cliff faces and lyre birds that frequent the damp parts of the mine.

Dartmouth and the Dartmouth Dam
Dartmouth is a small town which is located 17 km east of Mitta Mitta along a road which winds beside the Mitta Mitta River. The township was built in the 1970s as accommodation for the workers building Dartmouth Dam which is 3 km south-east of town.
Old Dartmouth, which developed in conjunction with goldmining on the Dart River (hence its name) in the 1870s, lies beneath the dam. The mining was never on a large-scale owing to the inaccessibility of the site and had ceased by 1906 due to the expense of transport. Thus the settlement was never more than a hamlet.
Dartmouth Dam, completed in 1979, is the state's largest dam and Australia's most elevated rock-fill dam. Beautifully situated, it is bordered by 50 km of shoreline, has a earth and rock filled dam wall 670 m long and 180 m high (the largest of its type in the southern hemisphere), a surface area of 62,000 square kilometres and holds four million megalitres. It was created through the efforts of the Federal Government, Victoria, NSW and South Australia for irrigation and domestic and stock consumption. In 1985 most of the town was purchased by a company which developed it as a tourist destination. Today it has a 25 unit motel, a caravan park, boat hire and many of the houses have been turned into holiday lodges. It is capable of accommodating about 280 tourists. Popular activities in the area are bushwalking, golfing, four-wheel driving, photography, horseriding and particularly fishing. The lake contains rainbow trout, brown trout and the little-seen Macquarie perch. Motor boats are permitted but waterskiing is not. A 3 km road leads from the town to the dam wall while a separate 8 km road leads to a boat ramp on the edge of the lake.

Walking Tracks
Walking trails radiate out from the township. The most popular is the Switch Back Track, a 2.5 km walk which starts at the caravan park which winds through stands of stringy bark trees, takes around two hours, and offers views over the valley and the town. There are walking track maps available at the Goulburn Murray Water Information Display.

Fishing
Fishing for Murray cod, rainbow trout, blackfish, carp and canoeing is popular in the Mitta Mitta River. The fish can be challenging. The river is quiet and peaceful.

Driving to Mount Benambra
There is a pleasant scenic drive to Mount Benambra from Dartmouth. The road is unsealed but suitable for 2WD vehicles in dry weather. 15 km from the town is a lookoout tower with impressive, panoramic views. There are also a number of interesting 4WD tracks which connect with thte Omeo Highway and pass through areas which were once gold mining settlements.

Witches Garden
Located on the road from Mitta Mitta to Dartmouth is the unusual Witches Garden which claims to have the largest collection of medicinal plants in Australia. It is nestled into the valley and covers an area of four acres (1.6 ha). The total experience includes a gallery of the owner, Felicity McDonald's, paintings; a nursery where plants can be purchased; the Witches Cottage which is available for people wanting to stay; the lake and the Monet Garden; the Parterre Garden; the creek and the Mitta River gardens; the maze and the Physician Garden of medicinal plants. There is a downloadable brochure at http://thewitchesgarden.com/wp-content/uploads/2016/04/TheWitchesGarden-Brochure.pdf. For more information check out http://thewitchesgarden.com. For opening times tel: (02) 6072 3533.

* Prior to the arrival of Europeans the area around Mitta Mitta was home to the Jaitmathang Aborigines.

* The first Europeans in the area had taken up land by 1835.

* By 1837 James and William Wyse had taken up land at Mitta Station.

* By the 1850s the tiny settlement was known simply as The Junction.

* Gold was discovered at the northern end of the Mitta Valley in 1851.

* By 1852 gold had been discovered at the present site of the town.

* In 1858 the Snowy Creek experienced a gold rush.

*  In 1865 town allotments were surveyed and sold.

* The first post office was opened in 1870. It was around this time that the town of Dartmouth formed to support the miners in the area.

* In 1876 the town was officially proclaimed Mitta Mitta.

* In 1884 the Pioneer Hydraulic Mining Company, at the western rim of town, became one of the state's largest open-cut mines. The mine yielded 425 kg of gold.

* Dairying became a significant industry in the valley in 1900.

* The Pioneer Hydraulic Mining Company closed down in 1904.

* By 1975 Old Dartmouth had beenn flooded by the rising waters of the dam.

* In 2003 the town was surrounded by fires for five weeks.

There is a delightful local website. Check out http://www.mitta.com.au. 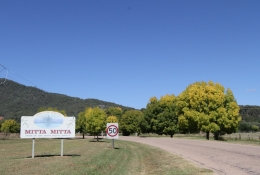 The entrance to Mitta Mitta. 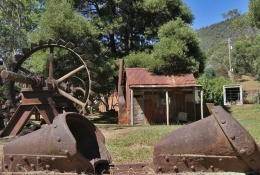 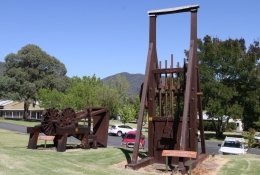 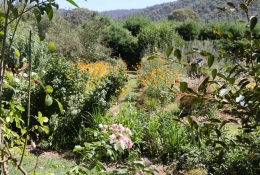 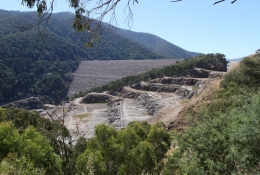 The Dam Wall at Dartmouth Dam. 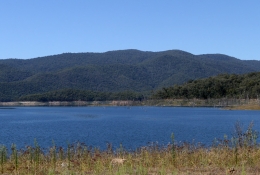 Lake Dartmouth from the boat ramp.