Prior to the 1990s Mogo was a non-town which travellers passed through and barely noticed. Then, after a number of artists and craftspeople moved into the area, the town, almost overnight, turned from a non-event into a tourist destination. The shops in the main street were painted in "heritage" colours, a few new shops (all built to look as though they had been there since the 1850s) appeared, a zoo and a goldrush replica were built, new boutique shops were established, chic inner-city style cafes were opened and the town became a popular tourist destination. Today it is rare to pass through Mogo without feeling that you should stop. The sides of the road are crowded, people are everywhere, there is a buzz of expectation. Still the best thing about the town is the zoo - an excellent private zoo worth visiting and experiencing.

Mogo is located 287 km south Sydney via the Princes Highway. It is 10 km south of Batemans Bay.

No one is sure exactly how Mogo and Mogo Creek got their names although there is some evidence that "mogo" is a Yuin Aboriginal word for a stone axe.

Mooching in Mogo
There is a very sexist joke about how women love Mogo and men hate it because it is such a good shopping centre. Like all unsavoury jokes there is an element of truth. The town is a wonderland of gift and craft shops with pottery, leatherwork, jewellery, clothing, woodwork, furniture, crystals and picture galleries all designed to lure wallets from the pockets and handbags of shoppers. The exercise is to find a parking place and wander. It is worth a few hours of happy mooching and, as a bonus, there are some excellent cafes with top quality coffee. It may be a tourist town but it is a classy one. Enjoy.

The Original Gold Rush Colony - Theme Park
The Original Gold Rush Colony is a clever theme park, used by both the general public and school groups, which recreates an old gold mining town and allows visitors to experience what a goldrush village was like in the 1850s. Located on the corner of Annetts Lane and James Street it has quality accommodation, a theme park which includes the opportunity to pan for real gold, an 1850s rock crusher demonstration, period portraits, collections of original equipment and some very non-1850s activities including Gold Rush mini golf, a Mogo Maze and train rides on a replica steam train. For more details check out the very detailed and comprehensive website at http://www.goldrushcolony.com.au

Mogo Bushwalk
The Mogo Bushwalk is right in the heart of Mogo. It starts at the entrance to the Original Gold Rush Colony. As the Eurobodalla Short Walks explains "Tucked in behind the historic town of Mogo, Mogo Bushwalk meanders through wet and dry eucalyptus forests. This walk provides a shady haven in summer and is suitable for all the family. The forest features majestic spotted gums with an understorey of burrawang cycads. Swamp wallabies often dart through the bush and in autumn and early winter, male lyrebirds display their magnificent tail feathers.
Length: 1.6 km
Time: 20 minutes return
Grade: Easy with some steps
Access: Eastern side of Princes Hwy at Mogo via Tomakin Road then James Street."

Check out http://www.eurobodalla.com.au/docs/short-walks.pdf for more details.

Mogo Zoo
Mogo Zoo is a model of a modern private zoo. As owner Sally Padey explains: "We’ve got 26.3 hectares (65 acres) but the zoo is on less than half that. We specialise in endangered species. We don’t specialise in natives. We’ve got a couple of kangaroos but, in the beginning, there were so many native parks in Australia and so many people doing really good things for native animals, that I thought exotic species were what needed to be helped. We’ve got the white lions."

It is much more than a zoo where people come to gawp through bars at caged animals. All the enclosures are large and animal friendly. There is a large "African savannah" area and most of the smaller primates are located on islands. There is a breeding program for endangered species which include the snow leopard, cotton-top tamarind, red panda and Sumatran tiger; there’s Zookidz, a three hour program conducted during the school holidays which offers children an opportunity to see behind the workings of the zoo; over $500,000 has been spent on a glassed enclosure for chimpanzees; there is regular deer and giraffe feeding during school holidays and weekends and there are such exotic wonders as the Scimitar-horned Oryx, Pygmy marmoset, silvery gibbons and Golden-Lion tamarin.

But most interestingly there is an Encounters program where, for a fee, you can get up close and personal to Red Pandas; Feed a Tiger; let Meerkats climb all over you; go on a Lemur Island Cruise; meet an African Serval; Feed a Lion; Walk the Dingoes; hold a Snake; or become a Keeper for a Day. It would be easy to spend an entire day at the zoo wandering from one enclosure to the next, having lunch at the Jungle Drum café, listening to the keeper talks and watching the feeding sessions. Padey estimates three hours as a good, workable amount of time to see and enjoy all the animals. Mogo Zoo is located at 222 Tomakin Road, open 9.00 am - 5.00 pm seven days a week. tel: 4474 4930, see http://www.mogozoo.com.au

* The first European to travel up the coast was Captain James Cook who reached Batemans Bay on April 22, 1770.

* The early settlers in the area were mainly timber cutters but few of them settled around Mogo.

* Gold was found in the area in 1851. By 1857 the goldrush which had started upstream at Araluen had moved down to Mogo with the discovery of gold flakes (it was never good for nuggets) in Cabbage Tree Creek. At the time thousands of miners (it has been suggested that as many as 30,000 were in the area) were scouring the creeks for gold. There is evidence that around 200 prospectors arrived at Mogo and this sudden increase in the local population led to the building of churches, shops, hotels, a post office in 1866 and a public school in 1869.

* The boom was short lived although there was still mining in the area as recently as 1984 when the mine at Binbimbie was finally closed down.

* By the 1990s Mogo was a tiny, sleepy settlement. Then craftspeople arrived, shops were built and it quickly became the bustling tourist town it is today.

* The town and the surrounding area was severely damaged by the bushfires which raged through the area in the summer of 2019-2020.

http://www.mogovillage.com.au/ is an unusual local website with individual entries for most of the shops in the town. 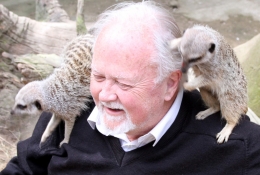 Me and the meerkats - they were eating worms out of my thinning hair - at Mogo Zoo. 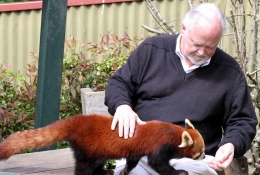 Feeding the incredibly cute red panda at Mogo Zoo. Sorry about the photo of me. 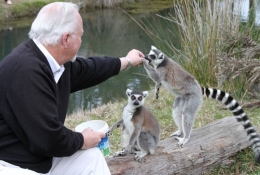 Feeding the lemurs (they are at the top of this page) at Mogo Zoo. I had the best time imaginable. 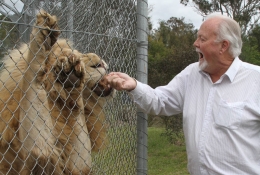 You can't get up too close to the lions at feeding time. Here I am again. Sorry about that. 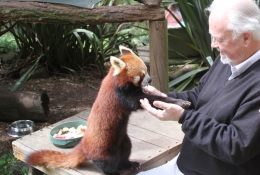 This was the highlight. I just loved the gentleness of the red panda. Too cute for words. 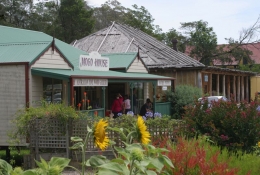 Typical boutique shops in the main street of Mogo 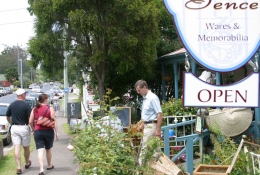 The main street of Mogo 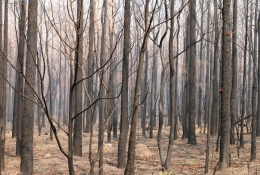 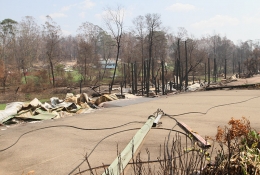