Moliagul is a ghost town which was once a thriving gold mining village. It is located at one corner of a district known as the Golden Triangle which has produced more gold nuggets than any other area in Australia. The other corners are formed by Tarnagulla and Dunolly. Although there are few houses, most of which are in ruins, there are about 200 people living in the district. There is one main reason for visiting this peaceful piece of the Australian bush - it was here that the largest known gold nugget, the famous Welcome Stranger, was discovered on 5 February, 1869.

Moliagul is located 200 km north-west of Melbourne via Marong and 20 km north of Dunolly.

It is thought that "moliagulk" was a Wemba Wemba Aboriginal word meaning "wooded hill".

John Flynn Memorial
There is a memorial near the corner of Bealiba and Murray Streets which is dedicated to the Reverend John Flynn, the founder of the Flying Doctor Service, who was born at Moliagul in 1880. The plaque on the memorial, which has a propellor of a plane as a symbol of the Flying Doctor, reads: "The Very Reverend John Flyn 1880-1951 OBE, DD Founder of Australian Inland Mission and the Flying Doctor service was born at Moliagul opposite this spot. He spread a mantle of safety over inland Australia by aviation, radio and medicine, and brought spiritual comfort, gladness and rejoicing. 'Across the lonely places of the land he planted kindness and gathered love.'"
Nearby is an old brick building, opposite the public hall, which is reputedly the site where John Deason, one of the finders of the 'Welcome Stranger', died. Around the corner is the Mt Moliagul Hotel, established in 1856.

School and Church
At the corner of Graham Street and High Street are the Moliagul State School (1872) and the Anglican Church, built of stone and brick in 1864-65.

The Welcome Stranger Find
On February 5, 1869 a Cornish miner John Deason (he had been born on the island of Tresco, 50 km south-west of Lands End), who had been prospecting in the area for seven years, was working in Bulldog Gully, near Moliagul. While searching about the roots of a tree Deason discovered, 2.5 cm below the surface, a gold nugget. He broke a pick handle trying to lever it out of the ground and eventually extracted it with a crowbar. Deason, with his partner Richard Oates (who also came from Tresco) concealed the nugget until dark. Then, with Oates, he dug it out and took it home in a dray.
The excellent signage at the goldfield explains: “Later that afternoon the nugget was placed in their dray and taken down the hill to the Deason house. The gold was stained black by ironstone deposits and was mixed with a large quantity of quartz. After placing the nugget in the fire, the gold expanded and the quartz became brittle and loose. When the nugget cooled 26 kg of quartz was prised off and later crushed in a local battery, belonging to Mr Edward Endey.”
The two then held a party, during which they revealed their find to the assembled guests. “Don’t go home boys,” said Deason, “That’s solid gold and I want you to stay the night and escort it to the bank at Dunolly tomorrow.”
The 2316 ounce (69 kg) 'Welcome Stranger', the world's largest-known gold nugget, was taken to Dunolly where it had to be broken on an anvil by the local blacksmith, Archie Walls (sadly there are no photographs of the genuine, original nugget) before it could fit on the bank's scales. It was worth £9,553 at the time (the equivalent, in terms of income value, of around $10 million in today’s money).  Although it is accepted as weighing 66.9 kg the signage at Moliagul explains: “The total weight of the nugget, including what was obtained from the crushed quartz and other pieces broken off and given away to friends, was estimated at 72.5 kg (2332 ounces)." Deason returned to Moliagul and his descendants are still in the area. Oates went back to Cornwall for a while but married and returned to live out his life at Dunolly.

Moliagul Historic Reserve and Discovery Walk
Located 2 km south-west of town (the route is clearly signposted) is a granite obelisk which the Mines Department placed there in 1897. It marks the site the 69 kg 'Welcome Stranger' gold nugget which was found on 5 February 1869. The citation on the monument reads: "Welcome Stranger Nugget - On this spot the largest nugget of gold found in the world was discovered on the 5th February 1869 by John Deason and Richard Oates. Weight - 2316 oz. Value - £9553. Erected by Mines Department 1897."
The Welcome Stranger Discovery Walk (there is a map and clear instructions on the signage near the obelisk) starts at the obelisk and explores the reserve which has a picnic area with shelters and barbecues. It starts with examples of surface mining (1) then moves to the location where John Deason had a small two-roomed shack (2) before moving on to the site of the puddler (3) where Deason and Oates treated the wash from their claim. A puddler was a watertight circular trench that was filled with water. Dirt from the claim was then added and a horse walked in a circle dragging chains or harrows around the trench to break up the dirt and dissolve the clay. The sludge was drained off and the remaining rocks removed and put through a cradle to glean the gold. The proximity to the house was to deter theft from the puddler.
The pile of stones further on are all that remain of Richard Oates' house (4). He was working in the paddock here when Deason called him to see the nugget. At that time there were a number of Chinese and European miners about, as well as market gardens and two dairies. Further on is a wooden headstone on the fence line which dates from the 1860s. It is thought to mark a Chinese grave. (5) Stones from fireplaces and raised dirt floors are all that remain of the Chinese camp from the 1860s.(6)  Like most Chinese camps it was distanced from the remainder of the settlement due to the hostility of the other miners.
The walk continues past an old puddling machine (7) and the remnants of a forest (8) which provided shelter for kangaroos and emus before being chopped down by the miners. Then past some new growth (9) of red and grey box trees and finally it crosses Black Gully (10), named because the gold was stained with black ironstone.

Mount Moliagul
Clearly visible to the north of the town and accessible via Dalmatian Road and Chinamans Lane, is Mount Moliagul (525 metres) which offers panoramic views from the summit. For more information check out http://www.goldfieldsguide.com.au/explore-location/76/mt-moliagul-lookout.

* The area is thought to have been occupied by the Wemba Wemba Aborigines prior to white settlement.

* Pastoralist and settlers began to take up land in the district at the end of the 1840s.

* Gold was discovered at Queens Gully near Moliagul in late 1852.

* By 1853 a police camp had been established to keep law and order for the 4,000 prospectors who were in the district.

* By January 1853 there was a store, blacksmith's and butcher's shop but the Sandy Creek rush saw the Moliagul settlement deserted.

* A second rush occurred at Moliagul when gold was found at Little Hill in July 1855. It was estimated there were about 16,000 people rushed the area.

* The Mt Moliagul Hotel was established in 1856.

* The school was moved to another site in 1872. The teacher was Thomas Flynn, the father of Rev. John Flynn.

* In 1880 the Reverend John Flynn, who founded the legendary Flying Doctor Service, was born in the village.

There is no visitor information in Moliagul.

There is a useful local website. Check out http://www.tarnagulla.com.au/moliagul. 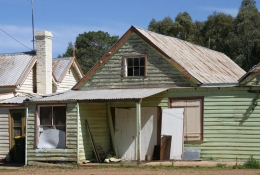 All that is left of Moliagul - ruins of houses and shops 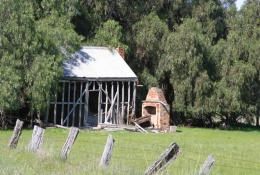 Ruins of an old house in Moliagul 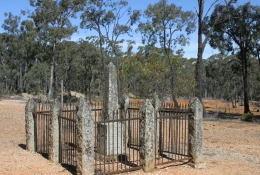 The monument to the Welcome Stranger nugget at Moliagul 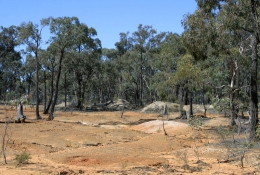 Old mullock heaps litter the ground once busy with miners 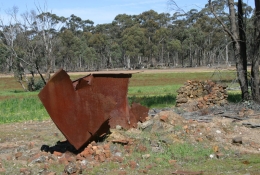 Rusted remnants of a bygone era around Moliagul 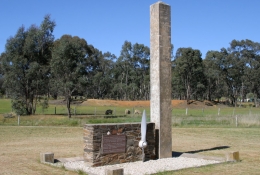