Moranbah is a thriving modern town which was constructed as a single purpose mining settlement by the Utah Development Company in 1970. By 2011 it had a population of nearly 9,000. Today it is a thriving and prosperous town in the heart of Queensland's coal mining country. The town is large enough to sustain a community of permanent miners as well as large numbers of fly-in, fly-out miners who arrive at the local airport and work at the many mines around town.

The town was named after a property owned by Andrew Scott. Scott had named the property "Moranbah" but he did not record where he got the name.

Musical Playground
A fun activity, particularly for children, the Musical Playground in the Town Square Park comprises a seat which can be played like a xylophone; a park table which can also be played and a rather elaborate piece of railway furniture (tracks and bits of machinery) which can be banged and beaten. For a demonstration, check out https://www.youtube.com/watch?v=H6ca9mPrxPM.

Peak Range National Park
The most impressive scenic attraction in the district is the Peak Range, a series of dramatic volcanic plugs which stand like sentinels rising from the plains some 120 km south of the town. The plugs were formed when volcanoes, which erupted some 29-32 million years ago, cooled and the molten lava solidified in the volcanic pipes. The surrounding land eroded leaving only the hard cores protruding. One of the most dramatic examples is Wolfang Peak on the southern side of the road from Moranbah to Clermont. It is possible to climb it. It is 572 m and takes around an hour. There are a couple of catches: a colony of bats live in a cave on the way to the summit and the summit itself is home to the giant St Andrew's Cross spiders (http://australianmuseum.net.au/st-andrews-cross-spider). Before climbing Wolfang Peak read http://www.isaac.qld.gov.au/peak-range-national-park for advice and information.
The Isaac Regional Council website notes: "Visitors to Peak Range National Park can enjoy bushwalking and photography, with spectacular geological features, views and historical interest. Peak Range National Park provides a remote natural setting with no motorised vehicle access, facilities or defined walking tracks. The National Park contains four plant species of conservation significance; Acacia arbiana, Bertya pedicellat, Troncinia patens and Dichanthium queenslandicum. Two animal species of conservation significance have been recorded in the area; the squatter pigeon Geophaps scripta scripta and the koala Phascolarctos cinereus as well as sightings of the whip-tailed wallaby Macrophus parryi."

Mining in the Area
Moranbah emerged specifically to service the Goonyella and Peak Downs Mines. Both are large open-cut operations. Goonyella lies 24 km north of the town and Peak Downs is 38 km to the south. Both are spectacular operations. At Goonyella, now known as Goonyella Riverside and owned by BHP Mitsubishi Alliance (BMA), the open-cut reaches a depth of 110 metres and a huge 12 m bucketwheel excavator cuts into the coal seam while 170 tonne trucks transport the coal to the waiting railway trucks. At Peak Downs five 97m long draglines remove 46 cubic metres of overburden each drag. The mine produces 5 million tonnes of coking coal a year. BMA operates seven Bowen Basin mines (Goonyella Riverside, Broadmeadow, Daunia, Peak Downs, Saraji, Blackwater and Caval Ridge) and owns and operates the Hay Point Coal Terminal near Mackay. The coal from the mines around Moranbah is railed to the sea and shipped from Hay Point. The railway was constructed in 1972. There are no public viewing locations.

* Prior to the arrival of Europeans the area was home to Aboriginal people from the Barna language group.

* The first European into the area was Ludwig Leichhardt who noted in January 1845 that he had found "water worn fragments of good coal".

* The area was settled in the 1850s. Andrew Scott called his cattle station Moranbah.

* In 1970 the Utah Development Company created the town specifically to service the Goonyella and Peak Downs Mines.

* A State School was opened in the town in 1971. A Post Office also opened that year.

* A railway to Hay Point, a port south of Mackay, was constructed in 1972.

* In the 1980s the town continued to expand with the discovery of huge coal reserves north of the town.

* In 1984 BHP acquired the local coal mines from Utah Development.

* The Moranbah East Primary School was opened in 1991.

* Anglo Coal established a mine at Moranbah North in 1998.

* A coal seam gas pipeline to Townsville was opened in 2004.

* By 2011 the average age in the town was 29. It was also known as the most expensive town in Queensland.

* Today Moranbah is home to miners who work in the Peak Downs Mine, Goonyella Riverside Mine, Broadmeadow Mine, Moranbah North coal mine, North Goonyella coal mine and a number of smaller mines in the region. It is also a destination for fly in-fly out miners. 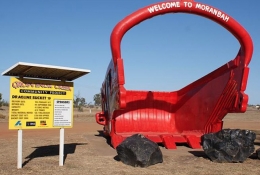 Big Red Rhino Bucket at the entrance to the town 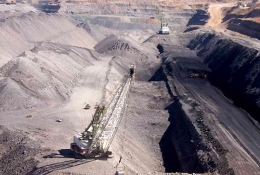 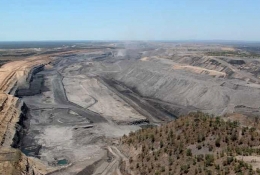 Peak Downs Open Cut mine from the air 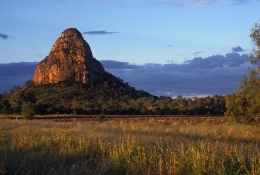