Northern wheatbelt town in the heart of WA wildflower country

Morawa is a typical northern wheatbelt town servicing the surrounding farms with a bulk loading facility, wheat silos, a railway line and a small shopping centre. It has a number of impressive attractions including the unusual Church of the Holy Cross designed by the famous architect-priest Monsignor John Hawes; two genuinely interesting granite outcrops - Bilya Rock and War Rock; an opportunity to see the iron ore mine at Koolanooka which was the first mine in Western Australia to ship iron ore to Japan; and an impressive local museum which has, as a highlight, an impressive display of windmills.

Morowa is located 368 km north of Perth via Coorow and Three Springs.

Morawa is an Aboriginal name, first shown on maps of the area for a rock hole in 1910. It is possibly derived from "Morowa" or "Morowar", the Dalgite, a small marsupial which burrows into the earth. Another possible meaning is "the place where men are made".

Church of the Holy Cross and the Old Presbytery
The Church of the Holy Cross is an impressive and very simple example of the work of  Western Australia's famous architect-priest Monsignor John Hawes who, between 1915-1939, designed and helped to build a number of churches in the Central West wheatbelt. In Morawa Hawes built the Church of the Holy Cross and an unusual small stone hermitage known as the Old Presbytery.
The plans for the church were completed in 1932. Hawes had a testy relationship with the previous Bishop of Geraldton, Dr Richard Ryan, but the new Bishop, an ex-plumber James Patrick O'Collins, when he first met Hawes is reputed to have observed: "So you're the architect. Well with your architecture and my plumbing we'll put churches all over the diocese." The result was that the Church of the Holy Cross was opened on 2 July, 1933 with Bishop O'Collins officiating.
The Church, which was built out of locally quarried stone, was designed along Spanish Mission lines but with a simpliciy and lack of the ornamentation which it unusual in Hawes' work. The use of local stone, red Cordoba tiles, louvred shutters and heavy walls was an attempt to keep the building cool during the district's oppressive summer heat. During 1933 Hawes built himself a Hermitage or Presbytery - a one room lodge with just enough room for a bed, table and chair which stands next to the church. Hawes used it when he was travelling through the area. Local folklore suggests that it is the smallest presbytery in the world.

The Buildings of Monsignor John Hawes
Morawa, as well as Carnarvon, Geraldton, Kojarena, Northampton, Mullewa, Tardun, Perenjori, Yalgoo, Wiluna and Nanson, has religious buildings designed (and often built) by the famous Western Australian architect-priest Monsignor John Hawes. Between 1915-1939 Hawes designed a large number of churches and church buildings in the Central West and along the coast.
Although some of Hawes' buildings are larger and more imposing, Mullewa has the greatest number of Hawes' buildings. There is the Church of Our Lady of Mount Carmel and the Holy Apostles St Peter and St Paul, the Priest House (now known as the Monsignor Hawes Priesthouse Museum) which stands nearby, the Mass Rock on the outskirts of town, and the headstone for Selby John Arnold in the town's Pioneer Cemetery.
Hawes was Mullewa's first resident parish priest. He arrived in the town in late 1920 and started building the church in 1927. It was to be his most personal and most original church and, as he wrote at the time, his devotion to the task was complete. "I am building into these stones at Mullewa, poor little feeble church that it is, my convictions, aspirations and ideals as to what a church should be."
For more information check out the excellent https://www.monsignorhawes.com dedicated to the work of Monsignor Hawes. There is also the very detailed Monsignor Hawes Heritage Trail which includes a map and a total of eleven places of interest. Check it out at https://www.visitgeraldton.com.au/Profiles/visitgeraldton/Assets/ClientData/Monsignor_Hawes_Heritage_Trail.pdf.

Morawa Museum
Located on the corner of Gill and Prater Street, and open from 9.30 am - 4.00 pm Monday to Saturday, the town's museum was established in 1973 as a typical wheatbelt museum with local farm and domestic implements dating back to the turn of the century; interesting displays of old clothing and memorabilia; and a remarkable collection of local windmills. The buildings include the Old Gaol and Court House which were moved to the site in 1975. For more details tel: (08) 9971 1777 or check out https://www.morawa.wa.gov.au/tourism/what-to-do/museum-and-old-police-station.aspx.

A New Way to Explore Western Australia’s Wildflowers
A full and comprehensive exploration of Western Australia’s wildflowers has always been a challenge. On one level they are everywhere. On another level, specific and rare wildflowers can be very difficult to locate.
The truth is that there are over 12,000 floral species and 60% of them are found nowhere else on the planet. Yes, it really is that remarkable.
Now, at last, in a miracle of political co-operation, nine local councils – Moora, Dalwallinu, Coorow, Perenjori, Carnamah, Three Springs, Morawa, Mingenew and Geraldton – along with some help from the WA state government, have come up with an excellent solution.
Historically trying to see the specific rare flowers was a logistical nightmare. When I first explored the wildflower area I can remember that I innocently asked where I might see a wreath flower (they are a flower which naturally forms itself in a circle like a wreath) at the local coffee shop in Morawa. Morawa is one of the famed locations for this unique plant.
I was told that there were some in the area but the person who knew was at the information office. At the information office I was advised, and this is verbatim, to "drive down the main street until you see the road that crosses over the railway line, drive across the line and past the Police Station and Fire Station (or is it the SES), turn right at the next road, continue up past the sheds for a couple of hundred yards and you'll see some beside the road". Absorbing the instructions I headed off and three minutes later, having noticed a sign reading "Wreath Flowers" on a fence, I found the plant.”
Yes, it really was that complicated. Locals were happy to help but it meant wandering around until you stumbed upon an expert ... unless you booked a coach tour with a gardening expert.
What the shire councils and the state government have done is take that kind of specific information and turn it into two, brilliantly constructed, wildflower routes through Western Australia’s Wildflower Country.
They have created two routes – The Wildflower Way and The Midland Route. The structure is inspired. There are a total of 38 places where the visitor, unfamiliar with the complexity of “chasing wildflowers”, is shown some of the floral uniqueness of the area.
The first – The Wildflower Way - starts in Dalwallinu and passes through Perenjori, Morawa, Mullewa and ends up in Geraldton. It has a total of 21 specific locations and, just like the woman who advised me 30 years ago, the instructions are suitably arcane: “Turn off the Mullewa-Wubin Road and travel 3 km on Offszanka Road, then turn left onto North-East Canna Road: site is near church, behind old hall.”
The second – The Midlands Route – runs from Geraldton in the north down through Mingenew, Three Springs, Carnamah and Coorow to Moora.
That’s the challenge. Wildflowers grow in the most unlikely places – and they seem to be in the same place year after year. To help, each floral site has a logo of four flowers and a steet silhouette sculpture - so, hopefully, you won’t get lost.
The result: for the first time people wanting to see the wildflowers in all their diversity have logical maps and sensible signage to guide them.
The time to go and experience this unforgettable floral display: between the end of July and September. And, one word of advice, book your accommodation well ahead. Those tiny wheatbelt towns really don’t have very much accommodation and, quite frankly, some of it is very, very basic. There is more information at http://wildflowercountry.com.au. It is a hugely useful site.

Koolanooka Hills Mine Site
Located 20 km east of Morawa is the Koolanooka Hills Mine Site. It is possible to visit a viewing area near the mine which provides picnic facilities and panoramic views over the mine. Iron ore was discovered in the district in 1961 and by 1965-1966 a mine, with a railway line and ship loading facilities at Geraldton, was developed. The mine was worked between 1966-74 by the Western Mining Corporation. On 16 March, 1966 the first shipment of iron ore from Australia to Japan departed from Geraldton to Kobe in Japan. It was ore mined at Koolanooka. There is detailed information at https://www.morawa.wa.gov.au/tourism/what-to-do/koolanooka-mine.aspx which points out that around the mine, and from the viewing site, it is possible "in season to see an abundance of flora including species of everlastings, eremophilas, melaleucas, grevilleas, acacias, orchids and numerous other varieties. The fauna includes euro and grey kangaroos, lizards, ducks, wrens, bellbirds, thornbills, honeyeaters, hawks and finches."

Bilya Rock
Located 30 km north of Morawa, this large granite outcrop is a pleasant and interesting place for a picnic or bushwalk. There is an impressive silhouette of an explorer on the rock and there are a number of interesting signs explaining the early exploring history of the area. One sign records a possible, although unlikely, visit to the rock by the great explorer, John Forrest, in 1869. It is often used to explain the cairn which stands on the top of the rock. As the signage explains: "Older residents of this district claim that there used to be a York gum post atop the cairn, with Forrest's name on it and the date of his visit. Unfortunately termites demolished the post in the 1940s, leaving something of a mystery..." Forrest certainly passed through the district but his journals suggest that he passed to the north and south.

War Rock
Located 16 km north of Morawa via the Mullawa-Wubin Road and Pintharuka Road, the War Rock reputedly received its name when two local Aboriginal tribes fought over the land. It has an important gnamma hole and in 1936-1937 dam walls, approximately 300 mm high, were built around the rock to channel rainwater into a water storage area which became the official local water supply. Today the area is particularly impressive during the wildflower season and a series of silhouettes depicting the warring warriors have been placed with informative signage near the dam.

* Prior to the arrival of Europeans the area was home to the Amangu Aboriginal language group.

* The explorer John Forrest passed through the area in 1869.

* The railway between Wongan Hills and Mullewa was opened in 1915. Morawa was just a railway siding at the time.

* In 1961 iron ore was discovered in the Shire of Morawa.

* In 1966 the first iron ore from Koolanooka was shipped to Japan.

* The Koolanooka Hills Mine Site was worked between 1966-74 by the Western Mining Corporation. Its main claim to fame is that the first shipment of iron ore from Australia to Japan was ore from Koolanooka.

There is an excellent local website. Check out https://www.morawa.wa.gov.au. 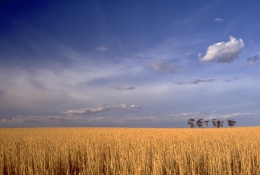 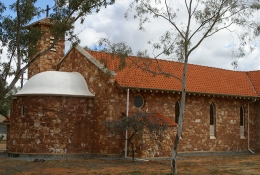 The Church of the Holy Cross designed by Monsignor John Hawes 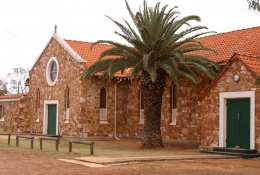 The Church of the Holy Cross is known for its simplicity 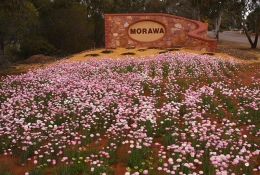 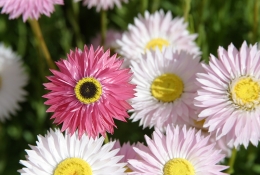