Large sand island off the coast from Brisbane - a 4WD experience.

Moreton Island, a 192,600 ha sandy wilderness, is 95% National Park. The island is 37 km long and 8 km at its widest point. It is a rare example of a virtually untouched sand island characterised by aeolian landforms, perched lakes, wetlands, and Mount Tempest, which at 285 metres above sea level, is reputed to be the highest permanent sand dune in the world. It is also claimed that Moreton Island's sand dunes are the steepest in the world and that it is the third largest sand island (after Fraser Island and Stradbroke Island) in the world. There are four small settlements (not really towns) on the island: Bulwer, Cowan Cowan, Tangalooma (the main access point to the island) and Kooringal. There are no established roads although 4WD vehicles can be driven along the tracks which run beside the 38 km beach from North Point to Reeders Point and it is possible to drive around the island mostly on the hard sand beaches. The appeal of Moreton Island is that, although it is only two hours by ferry from the centre of Brisbane, it is largely unspoilt and a reminder of what the Brisbane area was like before it was settled by Europeans.

Moreton Island is located 40 km offshore from Brisbane. It can be reached by vehicular ferry. The journey on the MICAT ferry takes 75 minutes.

It should be called Morton Island. Captain James Cook, sailing up the coast in 1770, named Moreton Bay after James Douglas, the Earl of Morton. A spelling error in an edition of Cook's Endeavour Journal turned Morton into Moreton and that became the accepted spelling. The spelling error was repeated on 31 July, 1799 when Matthew Flinders named the island, Moreton Island.

Getting to Moreton Island
Apart from the obvious (ie private boat) the barges and ferries to the island are run by Micat (https://moretonislandadventures.com.au) which leaves from Whyte Island at the mouth of the Brisbane River and travels to Tangalooma on a daily basis, tel: (07) 3909 3333. It is necessary to have a National Park permit if you are driving a 4WD.

Bulwer
Bulwer is the northernmost village on the western side of the island. It is geared to deal with the travellers who wish to explore the northern end of the island and particularly the beautiful Blue Lagoon, Honeymoon Bay and Cape Moreton. From Bulwer the most popular 4WD  tracks across Moreton Island are to North Point and across to the island's eastern beaches. The roads pass through the thick forests of the Moreton Island National Park and at various points it is possible to stop and admire the island's large dunes and freshwater lakes. Lake Jabiru - the largest lake on the island is located to the south of the Bulwer-Cape Moreton track and Blue Lagoon is inland from the beach near the south-eastern road from Bulwer.

There are two major tracks to the east from Bulwer. Both head east from the village for 5 km. The northern track, which is 8 km long, leads out to Cape Moreton and North Point. The southern track goes to the eastern beaches and Blue Lagoon.

The Bulwer Wrecks
The Bulwer wrecks lie in front of the town and create a safe area for children to play, a suitable swimming enclosure and a place which is ideal for snorkelling. Three ships have been scuttled: the Kallatina, a steel steamer of 628 tons which was built at Glasgow in 1890 and scuttled in 1931; the Hopewell and the 716 ton Mt Kembla both of which were scuttled in 1930. They were scuttled to create a breakwater.

Cape Moreton Lighthouse
The distinctive red and sandstone Cape Moreton lighthouse was built in 1857 from local sandstone. It was designed by the famous colonial architect Edmund Blacket who was responsible for the main quadrangle at Sydney University. This was the first lighthouse built in Queensland (although it was built by the New South Wales government - there was no government of Queensland at the time) and was a vital aid to shipping trying to enter the shallow and complex waters of Moreton Bay. It is elevated 122 metres above sea level and is 23 metres above the ground. The tower was extended in 1923. It was converted to electricity in 1937 and to solar power in 1993.

It is possible to drive south along the beach from the lighthouse and to complete a circuit by joining the road across the island from Bulwer which reaches the coast south of the Blue Lagoon. For more details about the lighthouse check out http://www.lighthouses.org.au/lights/QLD/Moreton%20Island/Cape%20Moreton.htm.

Honeymoon Bay
Honeymoon Bay lies south of North Point and is edged by 15 m high bluffs. It is easily accessible over the dunes or around North Point. The small beach is only 50 m long and is wedged in between large rocky outcrops. The bay faces east and experiences waves averaging 1 to 1.5 m. It is known as a hazardous beach being charactered by rips, hidden rocks and big waves.

Champagne Pools
At North Point there is a band of volcanic rock and sandstone which forms a natural break wall with clear pools on the island side. When waves cascade over the rocks they form the Champagne Pools.

Cowan Cowan
Down the coast from Bulwer is the tiny settlement of Cowan Cowan. The beach is closed off to vehicles which means it is ideal for swimming and for children.

Tangalooma
Tangalooma was originally established as a whaling station. The whaling station closed in 1962 and today it has the only major resort on Moreton Island. People planning to stay at the resort enjoy a personal catamaran service which departs from Brisbane, tel: (07) 3268 6333. Check http://www.tangalooma.com/info/home. The main access point to the island lies to the north of Tangalooma Island Resort at Tangalooma Wreck. From there, there are tracks down the coast to the resort and across the island. Roads head across Moreton Island to the eastern beach and north along the coast to Bulwer. There is a common track for 5 km to the north of Tangalooma Resort. The route then turns either north or east. From Tangalooma Wreck it is 7 km east to the island's main eastern coast beach and it is possible to drive north to Eagers Creek and Mount Tempest. Mount Tempest, at 285 metres above sea level, is a challenge but the views are 360° and it is possible to see the Sunshine Coast to the north and the Gold Coast to the south. One of Tangalooma's greatest attractions is the coloured sand desert which lies behind the small settlement.

The Tangalooma Wrecks
Recreational boat owners persuaded the authorities to create the Tangalooma wrecks in 1963. They wanted a safe anchorage and as a result fifteen old Harbours and Marine Department steam driven dredges and barges were scuttled on the edge of a sandbank to form a breakwater. Today the wrecks are an excellent dive and snorkel site. The wrecks are home to coral formations, tropical fish and wobbegongs, trevally, kingfish and yellowtail.

Kooringal
The tiny settlement of Koorigal lies at the southern tip of Moreton Island. It is necessary to have a National Park permit if you are driving a 4WD.

The Bay Islands - Russell Island, Lamb Island, Karragarra Island and Macleay Island
There are four other small islands in Moreton Bay which can be visited by means of water taxi and vehicular ferry. They have sandy beaches and mangrove foreshores and are popular spots for fishing, swimming, sailing, picnicking and barbecues.

The largest of the four is Russell Island, which has extensive birdlife and native vegetation, such as orange mangroves, wet heath, wildflowers, banksia woodland and eucalypt forest. It is popular for bushwalking.

Lamb Island, approximately 1.5 km by 1.5 km, was known by its Aboriginal name, Ngudooroo. There is a swimming area at the northern end of the island. It is known for its rainforest and as a nesting area for sea eagles.

The smallest island is Karragarra, which was briefly known as Rabbit Island in the 19th century. Historically, a farming settlement, it is about 4 km long and 500 metres wide and has about 100 inhabitants. It has a swimming enclosure, sandy beach and a jetty with nearby picnic and barbecue facilities

The fourth island is Macleay Island, which is 6.5 km long and 4 km wide. There is a useful website - check out http://www.macleayisland.net.

* Prior to the arrival of Europeans the island was occupied by the Morrgunpin Aboriginal people. There are numerous shell middens suggesting that the island was inhabited for at least 2,000 years before Europeans sighted it.

* Moreton Bay was named by Captain James Cook when he sailed up the east coast of the continent. He reached Cape Moreton on 17 May, 1770.

* During his exploration of Moreton Bay in May, 1799 Matthew Flinders named the island, Moreton Island. Flinders discovered that both Moreton and Stradbroke Islands were separate from the mainland. Cook had believed they were part of the coast.

* A penal colony was established at Red Cliff Point in 1824 and the bay became known as Moreton Bay.

* A pilot station was established at the northern end of the island in 1848. That same year a small number of settlers arrived on the island.

* In 1857, the lighthouse, designed by the colonial architect Edmund Blacket, was built by convicts at the northern tip of the island.

* By 1859 Moreton Bay, as a description of the whole district, began to change to Brisbane.

* The constant problem of shipwrecks was further alleviated by the construction of a signal light at Cowan Cowan in 1874.

* In the 1890s a telegraph line was built to Cape Moreton lighthouse from North Stradbroke island.

* During World War I a defence base was built at Cowan Cowan Point.

* During the twentieth century the island was inhabited intermittently. There was a whaling station near Tangalooma between 1952-1962 and during World War I and World War II it was developed as a major line of defence against an attack on Brisbane. During World War II there were 900 troops stationed on the island.

* In 1966 the Moreton Island National Park was established.

* In 1989 the Queensland government banned sand mining on the island.

The official Moreton Island Visitor Information and Tourism site is http://www.visitmoretonisland.com. It contains lots of useful information about  accommodation and eating on the island as well as a good guide to the main attractions. There is a day trip to the island - see http://www.micat.com.au/play/eco-explorer-day-tour and National Parks have a useful website - http://nprsr.qld.gov.au/parks/moreton-island/about.html. 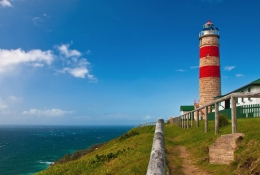 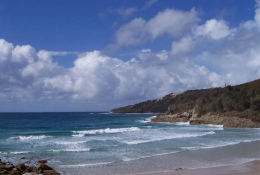 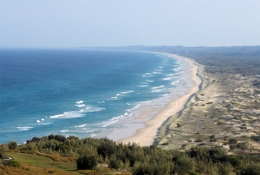 The view south from Cape Moreton.