Historic port on the 'Great Elbow' of the Murray River.

Located on a bend in the Murray River which is variously known as the 'North West Bend', 'Great Bend' or 'Great Elbow', Morgan is essentially a riverside holiday resort town known for its historic wharf, its importance as a river port in the golden days of Murray River transportation, and, today as an ideal place to hire a houseboat, engage in a myriad of watersports, or take a relaxing stroll beside the mighty Murray.

Morgan is located 175 km north-east of Adelaide via Gawler and Eudunda.

The town was officially proclaimed in 1878 and named after Sir William Morgan, a merchant and politician, who was Chief Secretary of South Australia at the time. The area was known as Koerabko to the local Aborigines. It was said to mean "a great place for honey and the meeting of tribes".

Morgan's Historic Walk
There is a downloadable map and guide to 46 places of historic interest around the town. Check out http://visitmorgan.com.au/html/historic_walk.html. They are all located conveniently beside the Murray River or in the area bounded by the Morgan-Renmark Road and the town's High Street. Of particular interest are:

1. Landseers' Warehouse
Rare for a country town, Morgan has three museums. This building, on the corner of Railway Terrace and High Street, was the Landseers' Warehouse and was completed in 1878 in time for the official opening of the Railway.  A.H. Landseer Ltd was the largest merchant in Morgan and this building was part of the largest trading and shipping company on the Murray. Landseer was so powerful that a private section of the railway was built to move loaded trucks between the station and the warehouse. The Morgan Living History Museum is the current caretaker of the building and it houses the Living History collection of materials relating to farming activities, the riverboat trade, the railway linking Morgan to the seaport of Adelaide and the pumping station for the Morgan to Whyalla pipeline. The collection includes an excellent collection of horse drawn vehicles used for the transportation of goods and passengers and a 1926 Chevrolet truck in working order. There is also an old telephone exchange, an old schoolroom and a farmhouse kitchen. The museum reflects the rural farming community and townspeople and a rare collection of horse drawn vehicles of historical significance. For more information and photos of the exhibitions check out http://visitmorgan.com.au/html/museum.html.

5. Ferry Terminus
The Ferry Terminus is believed to date back to the 1850’s when passengers would winch themselves across the river. The first official ferry, built in Morgan in 1906 and operated by hand charged one penny per passenger, two pennies for cattle, a farthing for a sheep, a penny for a pig, two pennies for a bicycle and sixpence for a vehicle. The ferry operator’s wages were 15 shillings ($1.50) per week.

11. Railway Station
The first steam train to reach Morgan was the “Pioneer” on 17 April, 1878, and the last train was the “Duchess of Gloucester” which departed in November 1969. At its height the railway station dealt with six trains a day and the Morgan line was the busiest in the South Australia.  Now the railway line is gone and the station is Morgan’s Waterfront Museum with exhibits which concentrate on the paddle steamer/railway trade.

15. Morgan Wharf
This huge structure was built progressively between 1877-1912 and was the hub of life in the busy riverside port. It is a reminder of the scale of activity, and the level of transportation, which drove the town's economy when the river was a vital link with inland Australia. It remains one of the most impressive structures on the River Murray system. As Port Morgan became more important during the steamer trade (1880 - 1915), the red gum and blue-gum wharf kept being extended. The first section was built in 1877, the second section in 1878 and the final section in 1912. By 1912 it was 168 metres long. The wharf was multipurpose. It was a timber loading platform; it had five water hydraulic cranes with piping, gearing and drive shafts linked to the steam boiler house and engine house; it carried a railway line and had a large goods shed. A network of stairways, ladders and decking descended through the massive timber piers and girders to provide service to landing stages at lower levels. Gangs of up to fifty men worked 24 hour shifts, while six trains a day were dispatched to Port Adelaide, and long queues of paddle steamers and barges laden with wool, wheat, and other goods waited to be unloaded.

16. Sunken Barge & Steamer
Upstream from the Morgan wharf is the sunken barge Crowie which was built at Goolwa in 1911, and is reputed to be the largest barge built for the river trade.  The vessel sank at it moorings in 1946. Further up is the wreck of the Sternwheeler Corowa which was built in 1868 at Moama.  Part of her stern wheel rudder poles lies above the water and a small section of a steam pipe and boiler lies about 10 cm above the water line.  The Corowa sank at her moorings in 1946 after being abandoned.

Walking along Railway Terrace
The town's main historic street is Railway Terrace which has no fewer than 14 old cottages and buildings (all listed on the Historic Walk) which date from the earliest years of the town's development. Of particular interest are the Customs House and Court House - a pair of interesting buildings which were constructed around the time the town became an important port (circa 1878). They are reminders that there was a time when the future of the town looked rosy and growth and prosperity were seen as inevitable.

Morgan Conservation Park
Located across the Murray River (take the ferry) from Morgan this 363 hectare area on the north west bend is predominantly a system of lagoons, swamps, creeks and anabranches bordered by river red gum woodlands, mallee and wattle all of which are home to a wide variety of birdlife including regent parrots, pelicans, kookaburras and white-faced herons.

White Dam Conservation Park
Located 9 km north west on the road to Burra White Dam Conservation Park is notable for its arid region vegetation including black oak, blue bush, native boxthorn and bladder saltbush. There are over 60 bird species in the park which is notable for its large populations of red and western grey kangaroos. Annual rainfall averages 250 mm per annum with monthly evaporation exceeding rainfall in every month of the year.

The Road to Burra
The best way to understand how marginal the country around Morgan and up to Burra really is, is to drive the road to Burra which crosses land with scrubby little bushes with sheep hidden between them. The ruins of houses are a reminder of the foolishness of those who arrived in good seasons only to watch drought set in and see the failure of crops. This road bears grim testament to the fact that this is extremely marginal land.

* Prior to European settlement the area was inhabited by the Ngaiawang Aborigines, part of the Meru language group, who were described as "very friendly and quickly picked up a smattering of English. They were willing to work ... and attempted to instruct the newcomers in their methods of hunting."

* The first European into the area was Captain Charles Sturt who paased Morgan in early February, 1830 and reaching Lake Alexandrina, at the mouth of the river, on 9 February.

* By 1851 land in the Morgan area was held under pastoral lease.

* In 1856 Brenda Park Station was leased to Hermann von Reiben.

* By the 1860s Morgan became an important stopping point for the overlanders bringing sheep to Adelaide. In 1866 the settlement was known simply as North-West Bend.

* The town was officially proclaimed in 1878 and named after Sir William Morgan who was Chief Secretary at the time.

* Town lots were auctioned on 16 May 1878 with some selling for as much as £1540 per acre. Smart investors realised that the arrival of the railway that year would ensure that the town became one of the major transport nodes on the river.

* In 1878 the Pioneer, the first railway engine, arrived in the town.

* By the 1930s the river trade had disappeared and the town became a small rural centre and a crossing point for travellers wanting to make their way across the Murray River.

The Morgan Living History Museum, Railway Terrace, tel: (08) 8540 2136 can provide information on the town and the area.

There is a useful and comprehensive local website - http://visitmorgan.com.au - which is worth investigating. 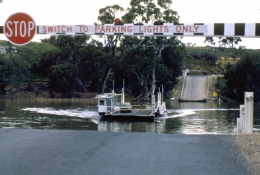 Ferry across the Murray River at Morgan 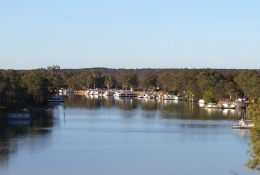 Houseboats on the Murray at Morgan 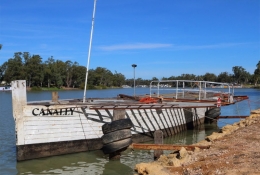 The wreck of the PS Canally at Morgan 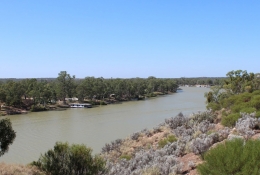 The Murray River at Morgan 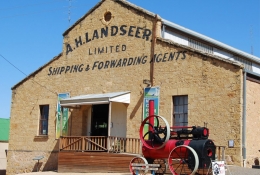 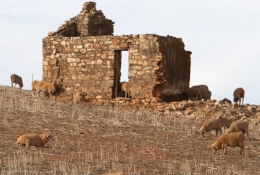 Symbols of the harshness of the region - an abandoned house now the home to sheep eking small fodder from the parched soil.