Rural service town known as the Olivine Capital of Australia

Mortlake is an historic settlement which lies at the base of Mount Shadwell, an extinct volcano. The town, which has a large number of impressive bluestone buildings, lies in an area of fertile volcanic plains which have produced a rich pastoral and agricultural district. The area is known for its olivine crystal which can be fossicked on Mount Shadwell. The town is characterised by a very wide main street.

Mortlake is located 216 km west of Melbourne via the Hamilton Highway and 49 km north-east of Warrnambool.

The Mortlake townsite was surveyed in 1853 and named after a village in Surrey, England - now a suburb of Greater London.

Mortlake History Trail
The Mortlake History Trail covers 20 historic buildings of Mortlake. There is also an excellent and very detailed walk around the town titled Mortlake's Bluestone Heritage. It can be downloaded at https://www.portfairyaustralia.com.au/assets-portfairy/Uploads/Mortlakes-Bluestone-Heritage-Walk.pdf. It lists, and describes, a total of 27 places of historic interest.

* Temperance Hall (1873) - Located at 15 Shaw Street the former Temperance Hall  has subsequently been used as both a glove factory (during World War II) and RSL centre. It was purchased by the RSL in 1947. It is a simple building.

* History Museum (1892-1893) - Located at 26 Shaw Street is a building constructed as a local history museum. Although it was initially a popular attraction it eventually closed and, from 1910, it was a billiards room and recreational hall.

* Group of Civic Buildings (1864) - The Victorian Heritage Database notes: "A distinguished group of three small civic buildings, now abandoned, consisting of Court House, Shire Offices and Post Office, built between 1864 and 1880. Construction is of basalt ashlar with the dominant, centrally placed, Court House in the formal plumb bond and the flanking buildings in random work. Roofs are gabled and slated with plain timber barges and trim. Verandas are of corrugated sheeting with timber posts and framing except for the Shire Offices which, unusually for such a building, has cast-iron veranda posts (of a modern Gothic design used elsewhere in the work of Davidson and Henderson) with a decorative cast iron valance. Set together on the edge of rising ground, the group once dominated the township but is now itself overshadowed by street trees and recent building. Other than for the adaptation of the Post Office to serve as a house the buildings which make up the group are intact."
The former post office was closed in 1912 when a new post office was built. The former courthouse was built in 1864 and closed in 1982 and the shire offices operated  from 1878 until 1964. See https://vhd.heritagecouncil.vic.gov.au/places/69306 for more information.

* St Andrews Uniting Church (1862) - Located on the north-western corner of Shaw Street and Church Street is St Andrew's Uniting Church (previously the Presbyterian Church). It is recognised by the National Trust as "A satisfyingly crisp bluestone building of 1861-2, described at the time as "a perfect model of a country church", but now defaced by the replacement of the bell-cote." See http://vhd.heritage.vic.gov.au/search/nattrust_result_detail/69419 for more information.

* St James' Anglican Church (1864-65) - Located in Shaw Street and listed in the Victorian Heritage Database which notes: "bluestone church with four-bay nave, vestry and chancel designed by Leonard Terry and built in 1864-5. The exterior is dominated by a prominent bellcote, substantial raking buttresses, and windows with crisply detailed trefoil heads. The incongruous porch of 1962-3 is excluded from the classification." See https://vhd.heritagecouncil.vic.gov.au/places/69418/download-report for more information.

* St Stephen's Lutheran Church (1867) - Located at 39 Shaw Street, and now privately owned, this church was built of bluestone in 1867 as a Methodist church. This Gothic Revival design features freestone dressings and lancet windows.

* Original Presbyterian Church (1857) - Located at 50 Boundary Road (and clearly signposted), and erected in 1857, is the town's original Presbyterian Church. It served as both church and denominational school until 1862 when St Andrew's was completed. When the Shire of Mortlake was established in 1864 this building became the shire offices. It is now a private residence.

* Mortlake Flour Mill (1856) - Located in Mill Street is the Mortlake Flour Mill, built in 1856 to capitalise on the needs of gold-diggers in the region. When it was offered for sale (it sold in 2014) realestate.com.au recorded: "Constructed originally as a wind-powered flour mill in 1856 to service the burgeoning wheat growing district of Western Victoria, it was converted after only a few years of operation to a steam-driven mill with boiler which required a chimney. By the 1870s the wheat industry was moving North to the Wimmera and the prosperity of the milling business was in decline. Milling of grain and more commonly stockfeed continued until the 1940s in addition to the property being used as a timber merchant and produce business then post war as a storage facility for the soldier settlement commission.
"Most of the original outbuildings were removed in the years after the 1950s. Some of these were peripheral buildings but part of the bluestone structure also. Some preservation work commenced from this time. The Mill was subsequently registered for its historical significance and was purchased by the Mortlake community (MCDC) in 1996 when funding was secured to finance maintenance works on the buildings to preserve both the structure and its historical significance.
"The 4 level building overlooks the town and provides wonderful views of the surrounding town and farmland. It is vacant with internal timber framework and floors all intact. All of the working components of the flour mill have been removed but the timber beams to support the mill remain, as do some grinding stone foundations; both of historical importance. The detached chimney is in extremely good condition, a clear demonstration of the quality of stonemason workmanship of the era." See https://www.realestate.com.au/sold/property-residential+land-vic-mortlake-200979211 for more details.

* Willow Cottage (1870s) - At the north-western corner of Officer Street and Townsend Street (it is located at 102 Townsend Street) is Willow Cottage, built of bluestone in the 1870s or 1880s for a Mr McWilliam who owned a nearby butcher's shop. It has an impressive ornate wrought-iron veranda.

* Mac's Hotel (1859) - Located at 90 Dunlop Street, Mac's Hotel was built in 1859 as a single-storey bluestone structure but was rebuilt and extended in 1910. Check out https://www.macshotelmortlake.com.au. The original hotel was built by Alexander McDonald from local stone quarried by George Giddens and Charles Goodall.

* Penrose House (1867) - Located in Dunlop Street is Penrose House, a two-storey building of half-coursed, rock-faced basalt with distinguished quoins, architraves, cornice and central doorway. It was designed by Alexander Hamilton in 1867 for Nicholas Penrose, a Cornishman and local blacksmith. It is listed by the National Trust.

* Old Butter Factory (1894) - Located on the corner of Hood Avenue and Terang Road is the old factory which was built in 1894 and which manufactured its produce under the trade name 'Butterfly'. Local farmers brought their milk to the factory by horse-drawn cart and had the cream skimmed off for butter, some of which was exported to England. The plant had an electricity generator by 1910 and, by 1930, produced an annual 680 kg but was closed down in 1936.

Avenue of Honour
There were 191 Monterey cypress trees on the Avenue of Honour leading into the town on the Hamilton Highway. They were planted in 1919, and after World War II, and 100 years later, sadly, they were affected by a canker disease and more than 20 of them had to be removed. For more information check out https://www.abc.net.au/news/2020-06-04/mortlake-avenue-of-honour-historic-trees-felled/12316504.

Tea Tree Lake Reserve
There is an attractive park in the town. It is located off Officer Street and is an area of swamp which was drained in the 1870s. It was initially known as the Mortlake Botanical Gardens and covered an area of 50 acres. A new lake was created in 1988 and named Tea Tree Lake. It has pleasant walking paths, fitness areas and children's play areas.

* Prior to the arrival of Europeans the area was home to the Eastern Maar Aboriginal people.

* The first European to sight the district was Major Thomas Mitchell in 1836 during his Australia Felix expedition.

* The Derwent Company established the Mount Shadwell station here in 1839. It was on this land that Mortlake would later emerge.

* In 1839 the Watson brothers established the Merrang station on the western bank of the Hopkins River.

* The Mortlake townsite was surveyed in 1853 and named after a village in Surrey, England.

* Mortlake became important due to its position on the road between Warrnambool and the goldfield at Ararat which opened up in 1854.

* The bluestone Mount Shadwell Hotel was built in 1855.

* The Mortlake Flour Mill was completed in 1856.

* A Presbyterian church was erected in 1857 and operated a denominational school on its premises.

* A postal service was established in 1859 within the slab store of Jonathon Pagan. Mac's Hotel was erected that same year.

* By 1859 the township of Hexham had developed on a portion of the Merrang property.

* The Mortlake Road District was created in 1860.

* A Catholic Church was built in 1861. That year saw the establishment of a local Pastoral and Agricultural society.

* The Shire of Mortlake was declared in 1864. A post office and courthouse were built that year.

* The district was opened up for soldier settlement after World War I.

* The lakes around Mount Shadwell were drained in 1921.

* In 1994 the shire was absorbed into the larger Moyne Shire.

There is a useful local website. Check out https://www.visitgreatoceanroad.org.au/towns-and-villages/mortlake. 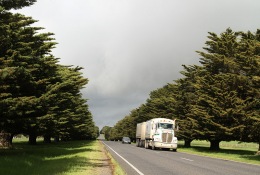 The Avenue of Honour planted in 1919 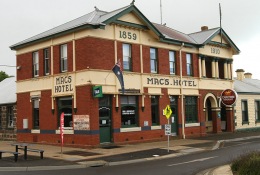 The distinctive Mac’s Hotel (1859) in the main street 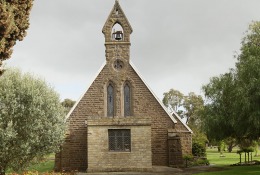 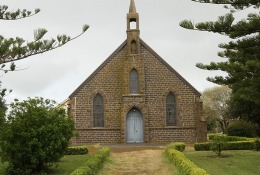 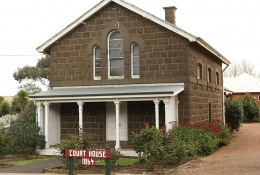 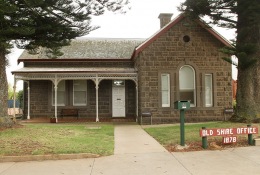 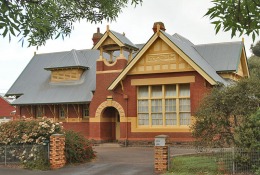