Reputedly the largest single rock in the world

Mount Augustus, for all its isolation, is one of the true wonders of Australia. It, not Uluru, is the answer to that vexing Trivial Pursuit question "What is the largest rock in the world?". Rising 715 metres above the flat plains which surround it (it is 1105 m above sea level), Mt Augustus covers an area of 4,795 hectares which makes it about twice the size of Uluru.

Mount Augustus is located 1,274 km north of Perth via National Route 1. It is 484 km east of Carnarvon and 560 km north-west of Meekatharra. Most of the road surface from Carnarvon and Meekatharra is dirt and gravel. The local Wajarra Aborigines knew the rock as Burringurrah.

The local Wajarri Aboriginal people called the mountain "Burringurrah" but on 3 June, 1858 the noted Western Australian explorer, Francis Gregory, who spent 107 days travelling through the Gascoyne, climbed  the mountain and shortly afterwards he named it after his brother and fellow explorer, Augustus Charles Gregory (1819-1905).

Facts About Mount Augustus
Reaching Mount Augustus by vehicle (it is possible to fly there) is a commitment of almost epic proportions. It lies 1,274 km north of Perth. Most of that road is sealed but when the driver departs from Carnarvon on the coast they have 484 km on a dirt and gravel road before they reach the mountain and, once there, they have to drive back to Carnarvon or drive another 560 km south-west to Meekatharra before they reach sealed road.

Mount Augustus is the world's largest single rock. It has a central ridge which is almost 8 kilometres long and it is estimated that the layers of rock which make the mountain are some 1,750 million years old and were originally created from sand, gravel and boulders deposited by an ancient river system. This initial deposit was then overlain by a marine seabed.

The mountain was formed as the result an uplift which buckled, folded and tilted the rocks as it raised the ancient beds. The result was a huge inverted V which is known to geologists as an anticline. The granite rock which lies beneath Mt Augustus is said to be 1,650 million years old.

The most significant difference between Uluru and Mount Augustus is that the former has a hard coating on its exterior which has, very distinctively, created a surface where there is no scree slope. In the case of Mount Augustus there is a scree slope so it lacks the distinctive shape of Uluru although it does change colour during the day - particularly at dawn and dusk. Mount Augustus also has considerable vegetation on its slopes.

Exploring Mount Augustus
There is a single reason for visiting Mount Augustus ... and that is to explore Mount Augustus. There are number of obvious points of interest:
(1) There is a 49 km road around the base of the mountain. This is worth doing as it passes around the sandstone and quartz mountain, through stands of wattles, cassias and eremophilas. In spring there are spectacular displays of desert wildflowers. Check out http://biocache.ala.org.au/explore/your-area#-24.3348|116.85000000000002|11|ALL_SPECIES to identify species of flora and fauna around the rock. During the drive it is likely that visitors will see the rich wildlife of the area - corellas, blue-winged kookaburras, emus, kangaroos and wallabies, euros, monitor lizards, honeyeaters and babblers.
(2) Walks - there are a number of walks ranging from short walks from car parks through to the challenging climb to the top of the mountain. The Parks and Wildlife website outlines the main walks:
"* Beedoboodu - choose Flintstone Rock Walk to crawl under the rock that bridges the creek to see Aboriginal engravings known as petroglyphs.
* Goolinee - the Corella Trail reveals tranquil scenes of waterbirds along the south bank of Cattle Pool.
* Warrarla - the Gum Grove Trail is through a shady grove of river red gums.
* The Pound - the Saddle Trail provides views back into The Pound and over the Lyons River valley.
* Mundee and Ooramboo - view local Wajarri Aboriginal engravings.
* Goordgeela - follow the rocky creek before ascending steeply to enjoy views of the Godfrey Ranges to the north and the Lyons River.
* Ooramboo - from Edney’s Lookout you can see the Outback Tourist Park camping area below and the country beyond.
* Warrarla - continue on from the Gum Grove Trail along a dry, rocky creek to Kotka Gorge where there are views to the east.

Climbing to the top - At Beedoboodu allow 6 hours for the 12 km return trek to the Summit. It is a long, difficult walk ascending over 650 m. You are rewarded with extensive views over the surrounding plain."
There are good brochures and maps available at the Mount Augustus Tourist Park.

* For over 40,000 years the Wajarra Aboriginal people moved through this land. They travelled from water hole to water hole and recognised the mountain as Burringurrah.

* On 3 June, 1858 Francis Gregory, during his 107 day journey through the Gascoyne, became the first European to climb the mountain.

* In 1887 Mount Augustus Station was taken up by Samuel James Phillips and John Hughes Phillips.

* In 1895 gold was discovered on the Lyons River. It  was brief and small goldrush attracting less than 50 miners.

* In 1989 9,168 ha of land was released from Mount Augustus Station and declared a National Park.

There are two very useful websites. The Mount Augustus Tourist Park website - http://www.mtaugustustouristpark.com - and the WA Parks and Wildliffe - http://parks.dpaw.wa.gov.au/park/mt-augustus. 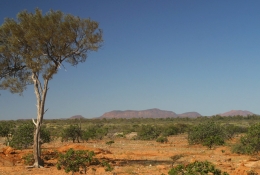 From 70 km away, albeit in a big arc, Mount Augustus looms on the horizon. 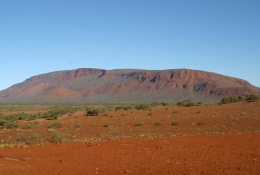 Unlike Uluru, Mt Augustus has a thin covering of trees. 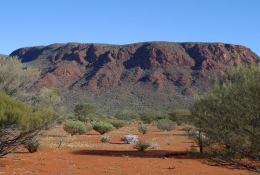 The tree-covered slopes of Mount Augustus. 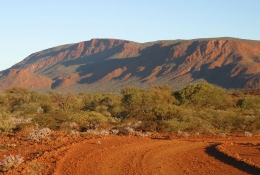 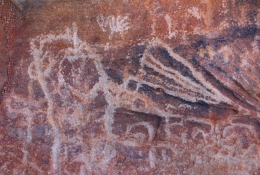 Ancient Aboriginal engravings on the cave walls at Mt Augustus 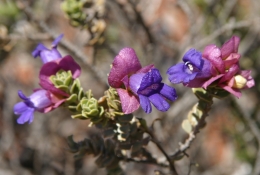 The flower displays in spring around Mt Augustus are remarkable. 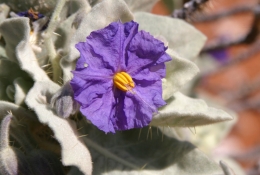 One of the many remarkable flowers around the base of the mountain. 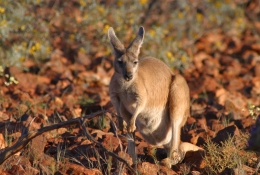 Kangaroos, wallabies and euros are common at dawn and dusk. 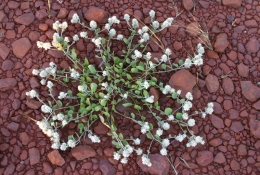 How do these flowers grow in such a barren environment? 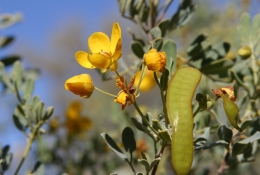 Another exotic flower blooming in spring.