Sleepy village on the edge of the Atherton Tablelands

Mount Garnet is one of those towns that is easy to pass through without stopping. To the traveller it looks like nothing more than a couple of pubs and service stations and a few shops and houses in the middle of nowhere. The appeal of the town lies in the beautiful Warrumu Swamp on the eastern edge of town which, at certain times, can be alive with vast numbers of black swans and impressive displays of water lilies. Equally interesting are the Innot Hot Springs which lie to the east of the town.

Mount Garnet is located 163 km south-west of Cairns via Gordonvale and Millaa Millaa and 1,767 km north-west of Brisbane via Emerald.

No one is sure how Mount Garnet got its name but it almost certainly takes it from the garnets which can be found in the local area. There is some debate as to whether it simply took the name from a nearby hill - Mount Garnet or from a mining company - the Mount Garnet Freehold Copper and Silver Mining Company.

Remnants of the Old Mine
A few remnants of the mine are still in evidence. Take the road opposite Norwestgate Motel and follow it south on a dirt road which leads past the old Assay House. Little is left but there is enough to show the scale of the operation at the turn of the century. After 1904 the miners turned their attention to the excavation of tin. Today Mount Garnet attracts gold fossickers and gem collectors.

Wurruma Swamp
Just before entering the town from the east, on the Kennedy Highway (it is 800 m east of the town and down Wurruma Swamp Road), is a dirt road which heads to Wurruma Swamp - one of the wonders of the Mount Garnet district. It can be tricky. Go down Wurruma Swamp Road and when you see a "turn right" sign don't take it. Go straight ahead and open the gate for access to the swamp. The swamp retains water long after other local wetlands have dried up. It attracts an amazing range of birdlife. At certain times of the year there are literally thousands of black swans on the waters. The swamp is edged by lilies. It is used for a water supply to the township. Fresh water is continually pumped from the Herbert River into Warruma, then pumped out of there into holding tanks for the town.

Innot Hot Springs
Located 24 km east of Mount Garnet, off the Kennedy Highway, the Innot Hot Springs were first sighted by Europeans when John Atherton passed through the area. By 1888 people were trying to exploit the mineral springs (they were believed to have therapeutic qualities although the water was too hot to bathe in) and by the early 1900s the waters were being bottled and shipped to Europe. Today, visitors can take the waters at the Innot Hot Springs Leisure & Health Park which has six public pools, or, simply dig your own hole in the river sand of the creek bed. The Leisure and Health Park has caravan sites, cabins, and camping sites. The Hot Springs are accessible to the general public. Check http://www.tablelandsinfo.com/region_guide/index.php?RegionInfoID=102&RegionSubjectID=20 which has some particularly useful comments about just how hot the springs are. 75°C will see you with some serious burns.

Mount Garnet to Lappa Junction Rail Trail
The 55 km Mount Garnet to Lappa Junction Rail Trail has been described as a moderate to challenging gravel trail which runs north from Mount Garnet on a line which was privately built in 1902, taken over by the Queensland Railways in 1914 and closed in 1960.
The Railtrails Australia website (https://www.railtrails.org.au/trail-descriptions/queensland?view=trail&id=94) describes the trail: "This trail goes through magnificent ranges with sweeping views of the isolated countryside. Ancient frangipani and mango tress mark the site of old stations and homesteads. Heritage items include narrow rock cuttings and old stone bridges. The trail passes through remote areas. There are no services along the trail. Carry plenty of water, food and fuel. Lappa is on the Atherton Tablelands - Forsayth railway line."
The useful Cycle Touring site (check http://cycletouring.wikifoundry-mobile.com/page/Lappa+to+Mt+Garnet+Rail+Trail) notes:  "The overriding feature of the trail is the total lack of any traffic and our group saw no vehicles - or humans - for the 6 hours we spent on the trail, an unusual gift which allowed young children to ride in safety. The trail is easily traversed on a basic mountain bike and we had no punctures in spite of sharp rocks and many dog spikes on the track. It is suggested the best period to negotiate the trail is during the winter months when creeks can be forded and the days are cool."

* Prior to the arrival of Europeans the area was occupied by the Barbaran and Kokopatun Aboriginal people.

* John Atherton passed through the area in the 1870s.

* In 1883 Albert Vollenweider discovered copper in the local area.

* In 1898 Vollenweider's freehold on the land was acquired by John Moffat, a local mining entrepreneur.

* At first the smelted copper was shipped out by camel.

* In 1902 a branch line from Lappa Junction to the town was opened.

* In 1904, a rumour went round that the original copper mine was going to close down. Half the men didn't wait for their notice to quit. They simply packed up their few belongings and were gone by lunchtime.

* In 1938 the Tableland Tin Dredging NL brought an electricity driven dredge which operated for a number of years.

* In 1986 the price of tin dropped and mining stopped in the town.

The town has its own website. Check out http://www.mountgarnet.org.au/visitors. 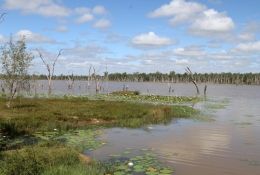 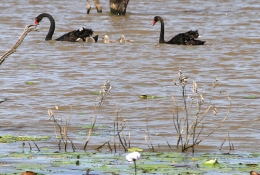 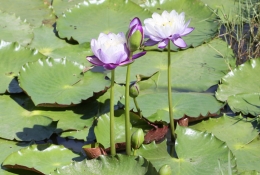 Water lilies at the edge of Wurruma Swamp 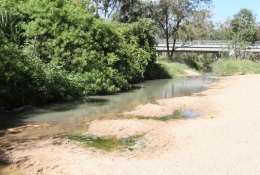 The creek at Innot Hot Springs 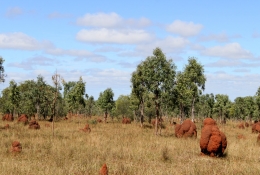 Termite mounds on the road between Innot Hot Springs and Mount Garnet.