Mount Magnet is a small township which now survives on a combination of gold mining and services for the surrounding pastoral area which has some of the largest sheep stations in Western Australia. The country is marginal and desert-like with an annual rainfall of only 228 mm per annum. Today the town has little to remind the traveller of its importance around the end of the 19th century. Perhaps the clearest evidence that it was once an important centre is the extraordinary width of the main street. Even the novelist Randolph Stow, in The Merry-go-round in the Sea, commented on the width of the main street:
''What's at Magnet?" the boy asked.
''Three gins and a goat," Alan Lamb said, "most days. And a street about half a mile wide."
In recent times, with the increased price of gold, a number of huge open cut mines have been established.

Mount Magnet is located 565 km north-east of Perth on the Great Northern Highway.

Mount Magnet is one of those towns where the name is self-evident. It was named by Surveyor Robert Austin in 1854. When he passed through the area Austin noted that a hill near the present townsite had magnetic ironstone which played havoc with his compass.

Heritage Walk
The Mount Magnet Heritage Walk explores the history of Mount Magnet by a simple walk up and down the main street and a short detour along Naughton Street to Laurie Street. It lists a total of 14 places of interest around the town. The Heritage Walk can be downloaded at http://www.mtmagnet.wa.gov.au/system/page/pdf/0000/0013/TOURISTTRAILupdatedOCTOBER09.pdf. The most interesting buildings are:

1. Mt Magnet Shire Offices
This modest building, located on the corner of Hepburn Street and Naughton Street, was built in 1898. On 14 September, 1901 a Roads Board was created to look after the district's roads and waterways while the council looked after the town. The Shire of Mt Magnet was established in 1961.

2. Bank Managers House
Located in Hepburn Street, the Bank Managers House (now privately owned) was built circa 1896 for the manager of the Western Australia Bank which had opened a branch in the town in 1896. It was built of mud brick and was said to be the best house in town at the time.

3. School Masters Residence
Located in Naughton Street, this simple mud brick house was built in 1898 and served as both a school and a residence until the school next door was built in 1900. It has been restored and is now owned by the Mt Magnet Historical Society.

5. Private Residence, Old Post Office
This large residence on the corner of Naughton Street and Atwood Street was built as the town's Post Office in 1900 with the stone coming from near St George's Mine.

7. Station Masters House
Located on the corner of Richardson and Laurie Streets, this house was built in 1897 as the home for the local stationmaster. The line from Geraldton to Cue was completed in 1897.

9. Mt Magnet Hotel
Located on the corner of Richardson Street and Hepburn Street, the Mt Magnet Hotel was build in 1896 from locally made mud bricks. It was originally known as the Oasis Hotel. Over the years it has been substantially modified.

14. Mining and Pastoral Museum
Located in the new, purpose built Mount Magnet Visitor Centre (located at 22-34 Hepburn Street, tel: (08) 9963 4172. It is open Monday - Saturday 9.00 am - 4.00 pm between April and October and Tuesday - Saturday 9.00 am - 2.00 pm in the winter months), the Mt Magnet Mining and Pastoral Museum "exhibits a vast collection of artefacts and photographs from the town’s rich past." The museum provides an insight into early pastoral (since 1878) and gold mining activities (since 1891) and the original Boogardie State Battery has been rebuilt on the museum site

3. Poverty Flats
Located to the west of the town, Poverty Flats were where H. Steadman, having lost his swag, found alluvial gold in 1891. The place was so rich with gold that Steadman and Watson found 250 ounces in a single day and one nugget from the area weighed 100 ounces. The rumour was that the early prospectors in the area were digging up nuggets like potatoes.

4. Mount Warramboo Tourist Lookout
For a dramatic overview of the town's open cut mines the Warramboo Hill Lookout offers a remarkable and memorable perspective. The route out of town is clearly signposted on Hepburn Street. Turn west at the Mount Magnet Hotel and continue on Richardson Street until you see the sign which heads off towards the mine tailings. From this vantage point the open cut mining operation and the town can be seen. It is worth noting that in 2017 "The Mt Magnet gold project is wholly owned by Ramelius Resources after it acquired Mt Magnet Gold Pty Ltd, previously known as Mt Magnet Gold NL, from Harmony Gold (Australia) Pty Ltd, in 2010. The Mt Magnet mining project is made up of many underground and open pit operations. It also has exploration targets located on established prospecting and mining leases. The project area covers a total of 225,000 square metres." For more information about the mine, check out http://mininglink.com.au/site/mt-magnet.

7. Amphitheatre
North of the town, on the Tourist Trail loop, the Amphitheatre is a desert breakaway which has formed into a natural amphitheatre.

8. Cave
Near the Amphitheatre is a cave which has been produced by hundreds of years of erosion of the Archaean rocks which reputedly are over 3 billion years old.

11. The Granites
About 7 km north of the town is 'The Granites' a rocky outcrop spread over several hectares. They are an interesting formation but, more than anything, they have some striking Aboriginal art. The West Australian Museum is currently investigating and recording the Aboriginal sites in the area. The sites are located beyond a sign warning Aboriginal women not to proceed beyond this point. The art work is located in small eroded areas in the granite boulders. To find the site either follow the Tourist Trail directions or enter from the Great Northern Highway at the sign which says "Granites" and follow the dirt roads which keeps turning right until you are behind the largest of the outcrops.

* Prior to the arrival of Europeans the area was home to the Badimaya Aboriginal people.

* Mount Magnet was named by the Surveyor Robert Austin who explored the area in 1854. The actual Mt Magnet lay 60 km east of the current town.

* Gold was discovered in 1891 during the Murchison goldrushes.

* There is some uncertainty as to who first found gold at Mount Magnet. Some sources claim it was H. Steadman at Poverty Flat in 1892 while other sources credit George Woodley who floated the Mount Magnet Mine.

* A railway link between Geraldton and Cue went through Mt Magnet in 1897.

* Mt Magnet fell into decline after 1915 when the miners went off to war.

There is a useful local website. Check out http://www.mtmagnet.wa.gov.au. 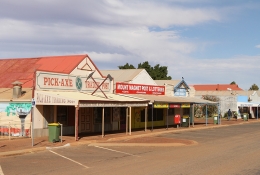 The main street of Mount Magnet 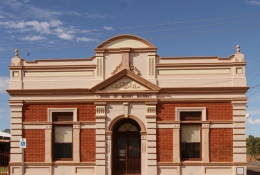 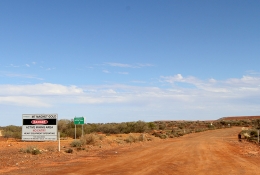 The road out to the Mount Magnet gold mine 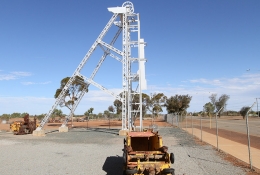 The head frame outside the Visitor Centre and Museum 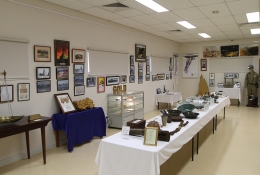 Displays in the Museum at Mount Magnet 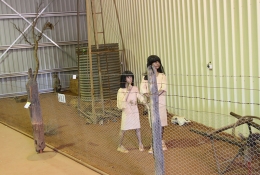 The Rabbit Proof Fence display in the Mount Magnet Museum 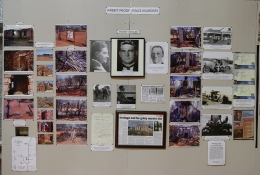 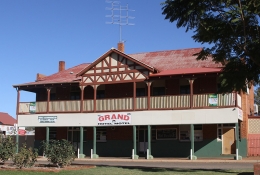 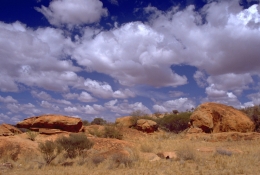 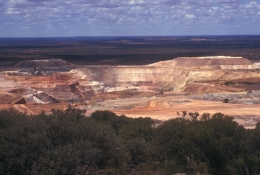 The Mount Magnet open cut mine.