Historic mining town on the edge of the Atherton Tablelands.

Mount Molloy is a tiny, historic, timber and mining town with few attractions. It has a huge pub - the National Hotel; a rusting and historic steam engine; and a graveyard which is the resting place for the hugely important explorer and prospector, James Venture Mulligan.

Mount Molloy is located 1,761 km north of Brisbane, 46 km south-west of Port Douglas and 104 km north-west of Cairns via Mareeba.

The town, and nearby mountain, were named after a teamster named Pat Molloy who found copper at Rifle Creek in 1885.

JM Johnston's Sawmill Steam Plant
Located at the corner of Santowski Crescent and the Peninsular Development Road, this old steam engine was used to power the local sawmill. It now stands like a sentinel at the southern entrance to the town. The Queensland Heritage Register records that "The steam plant at the site of JM Johnston's sawmill in Mount Molloy, as part of a large and long-lived sawmill operation, is important in demonstrating the existence of the timber industry in North Queensland prior to World Heritage listing of the Wet Tropics in 1988. The presence of large tracts of rainforest and the spread of railways in the Cairns hinterland ensured that in the early 20th century the region became the main sawmilling area outside South East Queensland and the timber industry was second only to mining as a driver for North Queensland's economic development. Johnston's sawmill, built on the site of a smaller sawmill linked to the earlier copper mining activities at Mount Molloy, operated from 1914 to 1963 as a permanent town-based mill, which enabled the town of Mount Molloy to survive the failure of mining." For more detailed information check out https://environment.ehp.qld.gov.au/heritage-register/detail/?id=602776.

Long Tan War Memorial
Located behind the Memorial Hall in the main street is an impressive new War Memorial and an unusual "Battle of Long Tan Cross". The signage explains: "On 18 August 1966, D company 6RAR, under the command of MAJ Harry Smith, set out to patrol an area North East of Nui Dat Base, Vietnam. The base had come under heavy mortar and recoilless rifle attack the previous night. At 1540h, in a rubber plantation, 11 platoon engaged the enemy; a force later estimated to outnumber them 20 to 1.
"The detail of the ensuing four hours of unrelenting fierce fire fight, under an atrocious tropical downpour, has been immortalised in military history. MAJ Smith's skilful leadership enabled a decimated 11 Platoon to link with 10 and 12 Platoons around Company Headquarters to hold the line. Supported by pin-point accurate artillery from batteries at Nui Dat Base and an ammunition resupply by 9 Squadron RAAF Hueys (Iroquios helicopters) flying in dreadful and hazardous conditions, D Company defeated a far superior force. Eighteen Australians were killed in action, eleven of whom were national servicemen.
"A concrete cross was erected on the battlefield by 6RAR in 1969 in memory of the fallen. At war's end, this was removed, however local villagers erected the current cross in the mid 80s; in dimensions, this cross is an exact replica. The original cross is displayed in the Dong Nai Museum in Bien Hoa City, Vietnam."

Cemetery and Grave of James Venture Mulligan
James Venture Mulligan looms large in the history of the town. In the middle of the main street is a monument to the man with the elaborate inscription: "James (Venture) Mulligan 1837-1907. Born Rothfriland, County Down. Migrated in 1860, found Palmer River gold in 1873, Hodgkinson River gold in 1875 which led to the establishment of Cairns and Port Douglas. He mined copper at Mount Molloy in the 1890s, married in 1903, bought the Mount Molloy Hotel in 1905, and died on 24-8-1907 from injuries received when he tried to break up a fight in his hotel. He had no children."
To the south of the town on Bakers Road is a small cemetery in which James Venture Mulligan is buried. There are two monuments to Mulligan in the cemetery. Near the road is a memorial which reads: "In memory of James Venture Mulligan Prospector and Explorer who led the party which found payable gold on this river in August 1873. This proved to be the richest alluvial gold field in Queensland." and "James Venture Mulligan was born in County Down Ireland in 1837 and emigrated to Australia in 1859. Besides the Palmer gold field he discovered the first tin in North Queensland at Wild River in 1875, the Hodgkinson Goldfield in 1876 and the first silver field in Queensland at Silver Valley in 1880 and led eight other prospecting expeditions throughout North Queensland. He died at Mt Molloy on 24th August 1907 aged 70."
The Queensland Heritage Register records that "James Venture Mulligan was closely associated with the discovery and opening of the Palmer goldfields, which was to provide considerable stimulus for the development of North Queensland in the late nineteenth century. Mulligan is also credited with the development of the Hodgkinson goldfield and is recognised for locating a number of potential mineral developments in North Queensland." Check out https://environment.ehp.qld.gov.au/heritage-register/detail/?id=600684 for more details.

* Prior to the arrival of Europeans the area was home to the Kuku-Yanaldji Aboriginal language group.

* By 1899 the Mount Molloy Copper Mining Company had been formed.

* In 1901 John Moffatt's Irvinebank Company had taken over the Mount Molloy mine.

* James Venture Mulligan died in the Mount Molloy Hospital in 1907.

* A private railway connected Mount Molloy to the Cairns to Mareeba line in 1908.

* Timber cutting concessions were granted in 1908.

* The local mines and copper smelter were closed in 1909.

* Work started on Johnston's Sawmill in the town in 1914.

The University of Queensland's Queensland Places website has useful historical information about the town. Check out http://queenslandplaces.com.au/mount-molloy. 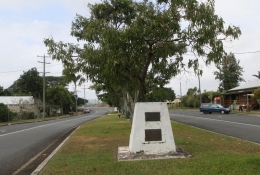 The main street of Mount Molloy 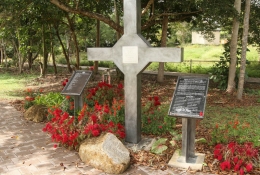 The Battle of Long Tan Cross at the town's War Memorial. 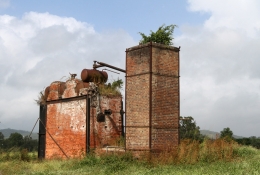 The steam plant at the site of JM Johnston's sawmill. 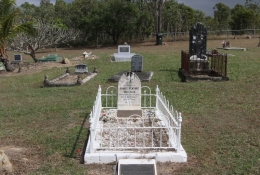 The grave of James Venture Mulligan.