Quiet rural village that was once a booming copper mining town.

Mount Perry was once a thriving and prosperous copper mining town. Today it is a tiny and quiet little settlement nestled under Mount Perry. Today Mount Perry is nothing more than a few buildings and an old copper slagheap where the old smelter used to be. The main attractions near the town are the excellent lookouts, the museum and the fascinating Boolboonda Tunnel.

Mount Perry is located 366 km north-west of Brisbane via the Bruce Highway and Burnett Highway. It is 104 km south-west of Bundaberg via Gin Gin.

The first European to sight Mount Perry was Colonial Surveyor, James Burnett. In 1847 he named the mountain after Deputy Surveyor-General, Samuel Augustus Perry.

Pat Augustine Cultural Centre
The Pat Augustine Cultural Centre in Heusman Street is home to the town's art gallery and Library. The historical display includes photographs of Mount Perry dating back to the late 1800s and information relating to businesses and families. The Art Gallery is operated by the Mount Perry Fine Arts Group and artists from around Queensland hold exhibitions in the gallery.

Mount Perry Bicentennial Museum
The Mount Perry Historical Society's Bicentennial Museum at 100 Heusman Street was originally the Mount Perry Shire Council Chambers. It has a collection of folk memorabilia which includes a working blacksmith’s shop, a variety of memorabilia including an old fire engine, a collection of historic hospital equipment, and has one of only three known Queensland restored and working three pole stampers, a blacksmith's forge and a curvilinear concentrator table.. The stamper can be started upon request. In the grounds is Madsen's kitchen a slab structure with a kitchen and utensils as they would have appeared in the 1860s. The museum is opened by request, tel: (07) 4156 3185. Check http://www.magsq.com.au/_dbase_upl/Mt%20Perry%20Profile.pdf for more detailed information.

Masonic Lodge
There's a fascinating masonic lodge (over the road from the museum in Isabella Street) with the delightful incongruity of an elaborate facade and fibro walls on the sides. The Queensland Heritage Register describes the building as: "a single-storey, rectangular-plan timber building of exposed stud construction now clad with fibrous cement sheeting on the sides and rear. The building is at street level at the front and is raised on posts at the back as the ground falls away to the rear of the block. The gabled roof is concealed at the front by a parapet and the street elevation is classically inspired although carried out in timber. It has a full width pediment supported by corner Tuscan pilasters. Framed beneath are two double hung windows flanking a central entry porch with a pedimented roof and supported by freestanding Tuscan columns.
In a striking contrast, the side and rear walls are completely plain and clad in fibrous cement sheeting. There are three plain rectangular windows placed high on both sides of the building towards the rear." For much more detailed information check out https://environment.ehp.qld.gov.au/heritage-register/detail/?id=600765.

St Patrick's Catholic Church
Located in Wallace Street, the impressive timber St Patrick's Catholic Church was completed in 1904. The Queensland Heritage Register notes that it is: "an elevated timber framed building situated on a prominent ridge overlooking the town of Mount Perry and is a dominant feature of its townscape.
The church is rectangular in plan, comprising a nave and side aisles and is clad in weatherboards. At the western end is a projecting gabled section housing a stairwell that accesses the choir loft. It is flanked by twin porches and stairs. The twin entrance doors are arched and this motif is echoed in decorative open timber work to the porches and to the gables of the portico and main roof. At the eastern end of the church is the sanctuary and adjoining vestry with a separate entrance on the northern side. The roof is clad with corrugated iron and is steeply pitched over the nave with aisle roofs springing from below clerestory windows. Crosses are located at the ends of the main roof and the gabled roof of the entrance portico.
The church is lit with timber-framed lancet windows placed alternately singly and in pairs. The triple lancet windows in the sanctuary are set with stained glass.
The interior of the church is very intact and the clear finish to internal lining boards and painted decorative trim appears to be that applied when the building was first constructed. Light fittings, hardware and furniture including altar, pews, statuary and a small harmonium are also original." For more detailed information check https://environment.ehp.qld.gov.au/heritage-register/detail/?id=600764.

Boolboonda Tunnel
One of the most interesting experiences in the area is walking or driving through the Boolboonda Tunnel which is located between Gin Gin and Mount Perry. The tunnel, which is unlined and unsupported, cuts through hard granite and is 192 metres long. It is reputed to be the longest unsupported tunnel in the Southern Hemisphere. It was constructed between 1883 and 1884 as part of the railway line from North Bundaberg to Mount Perry with the objective of opening up the mineral and agricultural resources of the area. The miners cut through from both ends and met up in the middle.
If the tunnel is approached from Mount Perry (it is Tunnel Road and is off the Gin Gin-Mount Perry Road 22 km from Mount Perry) it is clearly signposted. The gravel road passes through the long, dark tunnel which is only the width of one vehicle. Apart from the uniqueness of the tunnel - it is memorable and has recently been inhabited by bent-winged bats - the drive through the countryside between the two towns is worth the effort.

Bushwalking up Mount Perry
The enthusiastic bushwalker can hike up the walking track to the top of Mount Perry which is 750 metres above sea-level. The track passes through stands of hoop pine and rainforest and offers excellent views of the surrounding countryside. Wallabies, echidnas and koalas are found on the mountain.

* Prior to the arrival of Europeans the area around Mount Perry was occupied by members of the Gureng Gureng Aboriginal language group.

* The Mount Perry area was first settled in the 1840s when shepherds from the large coastal properties brought their sheep into the area for grazing.

* In 1851 the Mount Perry pastoral run was taken up by Robert Wilkins.

* In 1862 a local squatter, Henry Dingle, noted teh presence of copper ore in the area.

* By 1869 Henry Dingle announced the discovery of copper. This led to a rush of prospectors to the area.

* By mid-1871 five hotels had been built in the town. The town became known as Fyfe-Barnett.

* Overnight a mining town sprang up and, at the turn of the century, it was actually bigger than either Mackay or Cairns. At its height the population is said to have been greater than 30,000 and the town reputedly had 21 hotels.

* In 1877 copper prices dropped and the town's copper smelters were closed down.

* A railway line from Bundaberg reached the town in 1884.

* The town's economy collapsed dramatically in 1914, possibly due to mistaken financial ventures by the mining company.

* The court house was converted into a public hall in 1961.

The University of Queensland site offers a detailed history of the shire and the town. Check out http://queenslandplaces.com.au/mount-perry-and-perry-shire. The North Burnett Council site - http://northburnett.org/destinations/mount-perry-historical-and-cultural - is also useful. 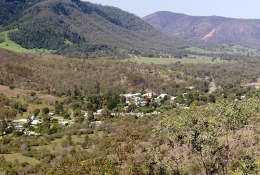 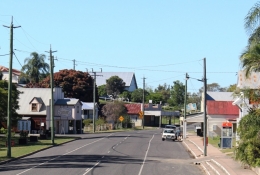 The main street of Mount Perry 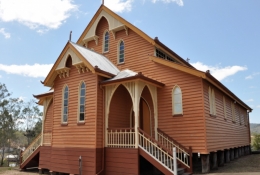 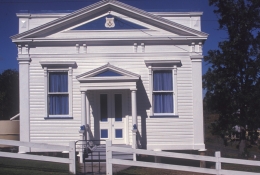 The Masonic Lodge in Mount Perry 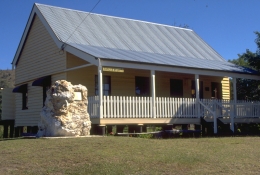 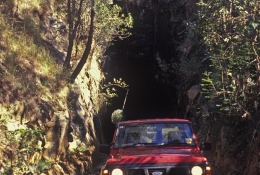 The Boolboonda Tunnel near Mount Perry (1990)