Historic heritage listed town at the western limit of the Blue Mountains.

The image of the Indian "hill station", the place where the wealthy go when summer on the coast becomes to hot, humid and oppressive, is beautifully realised at Mount Victoria. Here is the beautiful Manor House, the summer retreat of newspaper baron, John Fairfax, built in 1876. Here are large and elegant hotels and guest houses and here, only a few kilometres from the western edge of the Blue Mountains, are roads which tumble down the hillside to the charming villages of Hartley and Little Hartley.

Mount Victoria is 1043 metres above sea-level and is located 119 km from Sydney via the Great Western Highway.

Not surprisingly, and like so many other places around the British Empire, Mount Victoria was named to honour Princess Victoria who would become the famous Queen Victoria. The person responsible for this act of royal homage was Surveyor-General Thomas Mitchell. Interestingly he named both the mountain and the pass after Princess Victoria but the actual settlement was initially named One Tree Hill. It wasn't changed to Mount Victoria until the arrival of the railway in 1869.

The Imperial Hotel
You can't miss it. There it is at the top of Station Street standing grand and regal. The Imperial Hotel's website explains its importance: "Opened in October 1878 as a Resort Hotel with private Golf Course, Tennis Court, Croquet Lawn, Home Farm and horse-drawn Coaches to Jenolan Caves, the Imperial is the oldest Tourist Hotel in Australia. By the early 1900′s, it was well established as one of the three Grand Hotels of the Blue Mountains along with the Carrington at Katoomba and the Hydro at Medlow Bath, all of which were operated together for a time by Sir James Joynton-Smith (of Smith’s Weekly fame). In its heyday, The Imperial hosted Prime Ministers and Royalty – including George V and George VI, as princes – and still proudly displays the Royal Coat of Arms presented in 1901. " Check it out at http://www.hotelimperial.com.au

The Toll Keepers Cottage
A genuine historic curiosity is the Toll Keepers Cottage which is located about one kilometre east of the town - just as you cross the railway bridge. It was built in 1849 to collect tolls from everyone crossing the mountains. It was used continuously between 1849 and 1876. Similar to today's toll roads there were different charges for different vehicles although, unlike today, the heavier a vehicle was the cheaper the toll. A heavy coach without springs was free because it helped to crush the stones and improve the road. Lighter coaches with springs were charged one shilling and six pence.

The Mount Victoria & District Historical Society Museum
The Mount Victoria & District Historical Society Museum is located in the old refreshment rooms at the Mount Victoria Railway Station. The Museum's website explains "The collection is an insightful representation of the early history and old ways of living, farming and working in the upper mountains and valleys from the first crossing of the Blue Mountains and the building of the first road to Bathurst 1813 to 1815 through to the mid 20th Century. A prominent part of the collection focuses on the area as a tourist destination from the mid 19th Century when the railway reached Mount Victoria in 1868. Mount Victoria was at its height as a popular holiday resort from the 1880’s through to the 1930’s." The railway station was opened in 1868 and the refreshment rooms were closed in 1960. It is open from noon to 3.00pm on Saturdays, Sundays, Public and School Holidays. For more details check out http://mountvictoriamuseum.info/ which provides a very detailed description of the collection.

Westwood Lodge - The Manor House
The most impressive building in the town is the Manor House, sometimes known as Westwood Lodge. It is a grand Victorian Italianate mansion in Montgomery Street which was built in 1876 as a summer retreat by John R Fairfax, the founder of the Sydney Morning Herald. Fairfax died a year later and it was leased until 1887 when it was purchased by G. H. Cooper who opened it as the Blue Mountains Manor House Hotel, a name he subsequently changed to Coopers Grand Hotel. It operated as a typical luxurious mountain retreat until 1966. Since 1991 it has operated as the Blue Mountains Manor House. For more details see http://www.bluemountainsmanorhouse.com.au/.

Victoria Falls
Although sharing a name with Africa's most famous falls, the Victoria Falls are much more modest and can be accessed via Victoria Falls Road which is 500 metres east of Mount Victoria township. Continue down the road - about 5 km from the start of the dirt road - until you come to the parking area. There is a short, steep walking track to the falls. If you are feeling lazy there is the Victoria Falls Lookout only 150 m from the car park. For enthusiastic bushwalkers there is a trail  through open forest to Burra Korain Flat where there is a camping ground. This walk is about 6 km return. There are good details at http://bushwalkingnsw.com/walk.php?nid=724

Victoria Pass
There's not a lot of main highways in Australia that can boast they still use a bridge built by convicts in 1832. The Great Western Highway at Mount Victoria is one of them. As you drive west from Mount Victoria the road drops steeply before reaching Hartley. By any definition the original road, completed in 1832, was a masterpiece of engineering particularly the Convicts Bridge and the road crossing the narrow ridge at Mount Blaxland. There is a stone column which records the completion of the pass in 1832.

Lookouts around Mount Victoria
Partly because Mount Victoria is located on the edge of the Blue Mountains and partly because there are a number of excellent vantage points, the district is known for its lookouts. There are no fewer than

On the southern side of the Great Western Road there are:
Sunset Rock Lookout
At the western end of Mount Victoria turn left into Grand View Road and right into Beaufort Avene. The lookout offers fine views over Wilsons Gully towards Little Hartley.
Mitchell Ridge Lookout
Mitchell Ridge Lookout lies on the southern side of the Great Western Highway beyond the Mount Victoria Service Centre. It is a short loop road which leads to an excellent lookout over the valleys and plains to the west.

Walking Tracks in the Area
Berghofers Pass
Just before you reach the Mount Victoria Service Centre the Mount York Road heads north from the Great Western Highway. It leads to Mount York lookout and to the Berghofers Pass Trail . It is a 3.2-km return bushwalk which offers lovely views to the west. The walk uses remnants of an early road which was constructed between 1907-12 to allow vehicles a gentle descent from the mountain. Those interested in the early history of the area can view some ramparts built by convicts for the first road and a water trough for dogs which has been cut from sandstone.

Also on Mount York Road are the starting points for the Lawson's Long Alley and Lockyer's Line of Road (14 km, medium difficulty), a road which was built in 1824 to access Hartley Vale and was closed in 1832. And the Cox's Road/Mt York Road/Lockyers Line of Road Walk (12 km, medium to hard difficulty) . Both drop down the escarpment to Hartley Vale and follow the historic early roads. If you look carefully you can see remnants of the work done by the convicts - steps, ramparts and levelling. About 100 m from the top of Mount York there is an enormous boulder which had to be cut so that Governor Macquarie's coach could pass on its way to Bathurst.

Check out http://www.mapmyride.com/au/blackheath-new-south-wales/14-03-km-mtb-loop-lockyer-s-line-of-road-route-73763538 for useful information.

One Tree Hill
About 150 m east of Station Street Mount Piddington Road heads south. Follow it south and at Apex Ave it reaches One Tree Hill, at 1111 m it is the highest point in the Blue Mountains, and beyond is Mount Piddington which has tracks leading to Fairy Bower Reserve and further to the edge of the escarpment with views across the fertile Megalong Valley below .

* the explorers Blaxland, Wentworth and Lawson passed through the area on 27 May 1813. It is significant to the history of the crossing of the Blue Mountains that around Mount Victoria that the explorers on 28 May recorded seeing "native fires". They were merely doing what the local Gundungurra people had been doing for thousands of years.

* In 1815 William Cox constructed the first road over the mountains and his team passed through the area building impressive bridges and roads down the side of the mountains.

* In 1869 the railway arrived (and terminated) and over the next decade the town boomed. It was during this period that Station Street saw the building of the Mount Victoria Library (1875), Imperial Hotel (1878), Bank Building (1885) and the Mount Victoria Police Station.

* From the 1870s until the 1940s Mount Victoria was a popular 'hill station' retreat for wealthy Sydney families who would take the train and stay either in the large guest houses or in the mansions they built for themselves.

* Today it is a Heritage Listed township with a number of impressive and substantial historic buildings.

There is a local website with information about accommodation and eating is http://www.mtvictoria-nsw.com and http://www.heritageaustralia.com.au/search.php?state=NSW&region=2&view=393 is useful for a history of the town. 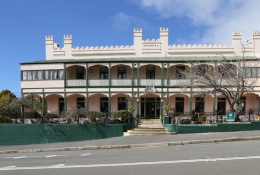 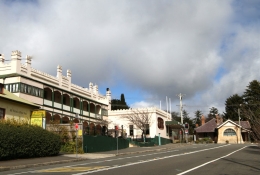 The main street of Mount Victoria with the Post Office on the Great Western Highway. 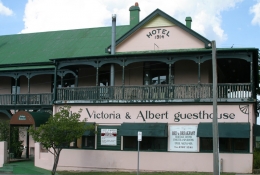 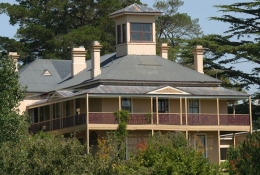 The Manor House in Montgomery Street which was built as a summer retreat by press baron, John Fairfax, in 1876