To see Mount Wilson, particularly in the spring and autumn, is to be reminded of how the early settlers pined for England and Europe. Here, amidst stands of superb eucalypts, are every imaginable European deciduous tree and in autumn the town and surrounds are alive with reds, oranges, browns and yellows as the leaves, bitten by the sharpness of the encroaching winter nights, turn from green and die. Mount Wilson has managed to keep itself above the tourism of the Blue Mountains. It is a very upper class retreat where cafes and gift shops do not prosper and people who love cold winters and beautiful gardens come to relive a lifestyle more in keeping with 19th century British colonialism than contemporary Australian society. Wander through the village and be amazed at how different it is, not only from the rest of the Blue Mountains but from the rest of Australia. The village is a footnote in Australian literary history because between 1912 and 1937 Patrick White's parents lived at Withycombe (it is a private home on the corner of The Avenue and Church Avenue) and in Flaws in the Glass White described Mount Wilson poetically as 'gullies crackling with smoky silence, rocks threatening to explode, pools so cold that the breath was cut off inside your ribs as you hung suspended like the corpse of a pale frog.'

In 1868 the New South Wales Deputy Surveyor General, P.F. Adams, named the region Mount Wilson in honour of the then Minister of Lands, John Bowie Wilson.

Exploring the Gardens
The best times to visit Mount Wilson are in the spring and autumn when the gardens are at their best. A bonus is that, for short periods, the gardens are open for inspection. For a small fee you can wander through six of the gardens and inspect the others from the "comfort" of the roads through the area. It is hard to imagine anything more delightful ... and more English! The glorious gardens, the avenues of trees, rows of plane trees, limes, elms, beeches, liquidambars and pink cherries all make a day in the village a memorable experience and, like any great English village, it is about mooching and surprise. Leave your car and just wander. There is a garden festival each year in April and May.

Very conveniently the Mount Wilson website has information on the times when all the gardens in the area are open for public inspection. Check out http://www.mtwilson.com.au/accommodation-a-gardens/gardens.html

Turkish Bath Museum
Here is a true piece of local eccentricity and a rare opportunity to see into the minds of wealthy Victorian businessmen and their 19th century beliefs in the healing powers of natural therapies and the value of Turkish baths.

It is open only once a month. Check http://www.mtwilson.com.au/index.php/mt-wilsonmt-irvine-historical-society/turkish-bath-museum.html for opening dates and times.

Other attractions in the region:
The Mount Wilson website lists a staggering 26 walks in the area - 15 around the village, eight on the road between Mount Wilson and Mount Irvine and three along Bells Line of Road. Which ones to choose? Well Wynnes Rocks, which can  can be reached via Queen's Avenue and Wynne's Rocks Road has superb views from the lookout down towards Mount Tomah. It is named after Richard Wynne, an early settler. And Happy Valley and Cathedral Creek (for those who are fit - it is a steep walk) offers a delightful section of rainforest along Mount Irvine Road. There are huge tree ferns, sassafras, a wide range of eucalypts and coachwood trees. Check http://www.mtwilson.com.au/index.php/things-to-do/walks/170-happy-valley-.html

* the area had been occupied by the Dharug Aboriginal people for an estimated 40,000 years before Europeans arrived. Stone axes have been found in the surrounding area.

* it is believed that the first European to reach the Mount Wilson area was probably the convict Matthew Everingham who, escaping from the Sydney basin, may have walked through the district as early as 1795.

* In 1832 William Romaine Govett (of Govett’s Leap fame) surveyed the area, climbed Mt Wilson and ambiguously described the district as a 'high mass of range of the richest soil covered with almost impenetrable scrub'.

* The area was surveyed in 1868 and subdivided into 62 portions, but the land did not start to sell until the Mount Wilson railway station was established in 1875.

* By 1880 there were eight houses in the village and because of the cool climate, the isolation and the rich soils, the first European settlers planted gardens with oaks, elms, beeches and pines from Britain; rhododendrons, magnolias, cedars and spruces from the Himalayas; and red oaks, tulip trees and conifers from North America.

* Today the village remains largely unchanged since the 1880s. To live in Mount Wilson is a lifestyle choice.

There is a very useful and information local website: http://www.mtwilson.com.au/. It has details about the gardens in the village. 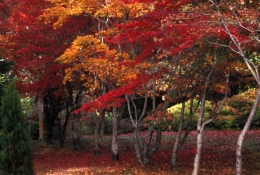 Autumn in Mount Wilson is a spectacle of colour. 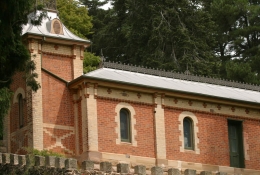 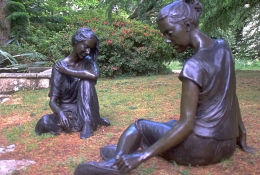 Sculptures in the Yengo Sculpture Garden. 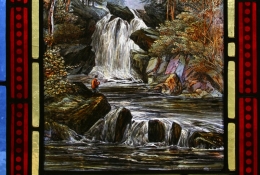 Detail of the stained glass window in the Mount Wilson Turkish Bath House.