Moura is not like other coal mining towns. It existed before coal was discovered in the area (the coal mine didn't open until the early 1960s) and consequently it doesn't feel like a mining town. It is more a rural service centre surrounded by cattle and dairy as well as cotton which is processed at the Moura Gin. Consequently it has been known as 'The Coal and Cattle Centre of the Dawson Valley'. Although there is diversity in the town's economic base it is still easy to find evidence of its involvement with coal. The playground which lies on the northern outskirts of the town features a giant cog and a huge shovel which are part of the play equipment and the brass statue of a miner commemorating the Moura Underground No 4 Disaster is a reminder of the way tragedies have affected the district.

Moura is located 593 km north-west of Brisbane and 187 km south-west of Gladstone via the Dawson Highway.

There is considerable debate about the origin of the town's name although it is known that it was taken from the Moura pastoral run which was established in the area in 1857. Some sources claim the name was taken from a local Aboriginal word for "dog"; others claim it was used to describe a "waterhole"; and still others claim the Moura run was named after the Portuguese town of Moura or the Castelo de Moura.

Moura Underground No.4 Disaster Statue
Located at the southern end of the town on the Dawson Highway, in the middle of the road, is a brass statue of a miner which which is a memorial to the Moura Underground No 4 Mine Disaster in which 12 miners lost their lives on 16 July 1986.
The Monument Australia website explains: "The 12 miners who were extracting pillars in the Main Dips Section were killed. Their bodies were recovered on 23rd July, 1986 after an extensive recovery operation. The Inquiry into the fatal accident was held in Rockhampton conducted before the Mining Warden and four persons having practical mining knowledge. The Inquiry commenced on 9th February, 1987 and closed on 27th February 1987. A number of recommendations were made by the members of the Inquiry, the most important of these being that flame safety lamps be prohibited from use in underground coal mines in Queensland subject to limited exceptions." For more details check out https://monumentaustralia.org.au/themes/disaster/industrial/display/92107-moura-underground-no-4-disaster-. The youngest of the miners was only 18 years old.

Moura Coal and Country Museum
Located at 33 Gillespie Street and open from 9.00 am - 2.00 pm on Wednesdays and Saturdays, the Moura Coal and Country Museum has a large photographic display and rooms which focus on local industries including coal mining, cotton, cattle, diary and grain growing. The museum also has a very unusual display of Japanese fans, gifts of appreciation from the Japanese Mitsui Mining Company, with which the town has formed a close relationship through industrial ties.

Pink Galah on the Water Tower
Located off the Dawson Highway, behind the town's Rotary Park, is a Pink Galah painted on the 18 metre high water tower by Brisbane artists, Sam Wilkinson and Xana Denruyter. The work, created over five days in 2018, was produced with a combination of house paint and spray cans.

Moura's Meridian Marker
There is a point on the Dawson Highway, on the road to Banana, where there are two rocks marking (exactly) the 150° Meridian as it crossed the highway. "This is the mid-point of the Eastern Standard Time Zone where the sun rises at exactly 6.00 am, and sets at 6.00 pm, twice a year at the time of the equinox (equal day and night) 22 March and 22 September." There are holes in the two rocks and as you line up the holes you are sighting the path of the meridian. The holes, which are exactly 28 cm in diameter, are drilled in the sandstone prior to blasting at the coal mine. The rocks have been removed and placed beside the road by Dawson Mines.

* Prior to the arrival of Europeans the area was home to Aboriginal people from the Gangula and Wadja language groups.

* By 1854 Charles Marshall named his pastoral run in the area, Moura.

* The large local pastoral runs were resumed by the Queensland government in the 1930s.

* Moura was laid out in 1936 on a typical grid pattern. It was a service centre for the local farming community.

* In 1940 a local state primary school opened in the School of Arts building.

* By 1955 the town had both an Anglican and Catholic church.

* In the early 1960s the Kianga - Moura coalfield brought miners to the area.

* In 1962 coal was being extracted from the local area by Thiess brothers and the Peabody Coal Company of America.

* By 1967 the open-cut coal operation was using the largest operating dragline in the world - a huge piece of equipment capable of moving 200 tonnes of coal at a time.

* By 1968 the coalfields were the largest in Queensland and coal was being railed out to Gladstone on the coast.

* On 16 July, 1986 the town was rocked by the Moura Underground No 4 Disaster in which 12 miners lost their lives.

* On 20 September 1975 13 miners were killed in an explosion in a mineshaft near the town.

* On 7th August 1994 11 miners were killed in an explosion at the main BHP mine. That year the mine became open cut with no more underground mining.

* In 1996 the Moura mine started collecting methane gas for sale.

There is a useful local website. Check out http://moura.net.au. 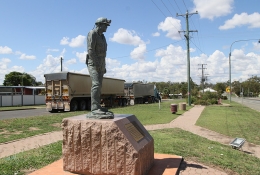 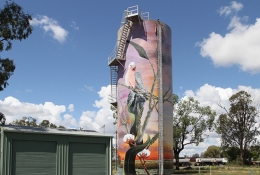 The water tower at the top of the main street 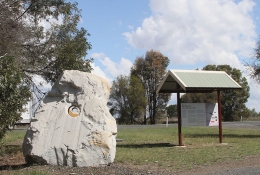 The Meridian Marker - you can see the second marker through the hole in the first stone. 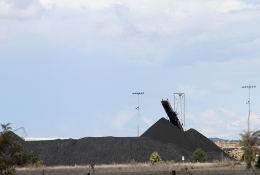 A section of the vast Moura coalfield