Mourilyan is a town which was once driven by its sugar mill. In 2006 a cyclone destroyed the mill and consequently today it relies largely on the Australian Sugar Heritage Centre, an attraction which introduces visitors to the history of sugar cane in the local area, and the wonderfully exotic Paronella Park.

Mourilyan is located 1,591 km north of Brisbane and 9 km south of Innisfail.

Mourilyan was named by Captain John Moresby in 1872. He named the harbour, which he had explored in the HMS Basilisk, after one of his officers, a Lieutenant T. L. Mourilyan.

Australian Sugar Heritage Centre
The Australian Sugar Heritage Centre is focussed on the history of sugar cane in North Queensland. It features a number of exhibits including "Historic Tractors and Farm Implements", "Steam Locomotives", historical photographs of the area, a history of the South Sea Islander (Kanaka) workers who laboured picking sugar cane, and stories of the Europeans who settled the area. Tel: (07) 4063 2477 or check out http://www.sugarmuseum.com.au.

Paronella Park
Located 16 km south-west of Mourilyan at 1671 Japoonvale Road is Paronella Park. Covering 5 ha beside Mena Creek Falls it is a remarkable anomaly - a combination of rainforest and a revitalised castle and wonderland. A Spaniard named Jose Paronella emigrated to Queensland in 1913 to work on the local cane fields. He made his fortune by developing and selling cane farms and proceeded, between 1930 and 1936, to build a fantasy castle on the banks of the Mena Creek which included a superb ballroom with a metre diameter mirror ball, a European cafe, a music pavilion, waterfalls and a remarkable 45-metre tunnel which led into a secret garden. It was the fulfilment of a lifetime's dreams and ambitions and it was hugely successful as a social centre for the local area. In 1946 Jose saw his dream seriously damaged by floodwaters which swept down the Mena Creek. Two years later he was diagnosed with terminal cancer. The park did not recover. In 1993 Mark and Judy Evans purchased what was essentially a ruin. The castle had been nearly destroyed by fire by 1979. The paths were seriously overgrown. Today it is open to the general public and is one of the eccentric wonders of North Queensland. To learn more, and find out about entrance costs, check out http://www.paronellapark.com.au or tel: (07) 4065 0000. It is open from 9.00 am - 7.30 pm daily.

Etty Bay
Etty Bay, to the north-east of Mourilyan and only 7 km from the Bruce Highway, is a 700 metre long, unspoilt beach where the tropical rainforest reaches down to the shore and where cassowaries can be seen wandering through the undergrowth. The beach has a caravan park and a surf lifesaving club. Although idyllic and unspoilt it is worth remembering that cassowaries can attack and the waters are home to saltwater crocodiles and box jellyfish.

* Prior to the arrival of Europeans the area was home to people from the Djirbalngan Aboriginal language group.

* In 1872 Mourilyan harbour was explored and named by Captain John Moresby.

* In 1873 George Elphinstone Dalrymple explore the area and reported favourably on the richness of the district.

* In 1883 the Mourilyan Sugar Company built a railway from the harbour to the sugar mill.

* In 1913 CSR began purchasing sugar from the Mourilyan sugar mill.

* The Queensland Government acquired the railway in 1914.

* The area was settled by Italian sugar farmers in the 1920s.

* The railway through Mourilyan reached Cairns in 1921.

* By 1960 there was a bulk sugar loading facility at Mourilyan Harbour. It has a storage capacity of 175,000 tonnes of raw sugar.

* The Australian Sugar Industry Museum was opened in 1977.

* The town was seriously damaged by Cyclone Yasi in 2011.

There is a useful website connected to the Australian Sugar Heritage Centre. Check out http://www.sugarmuseum.com.au. 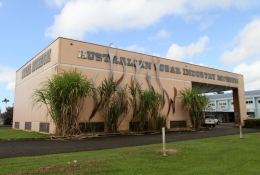 The Australian Sugar Industry Museum on the Bruce Highway. 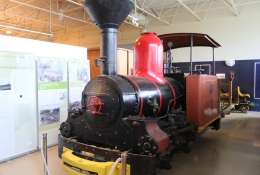 The steam powered loco which once plied the narrow gauge railways to and from the cane fields and the sugar mill. 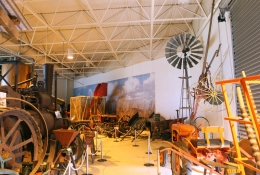 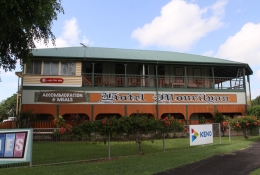 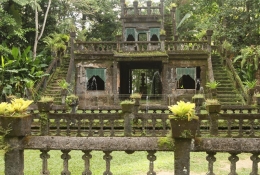 The Refreshment Room at Paronella Park 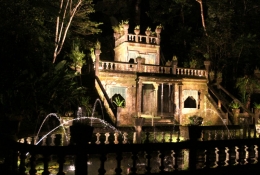 The Refreshment Room at night 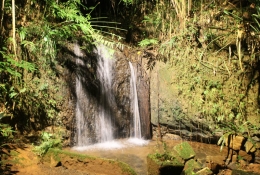 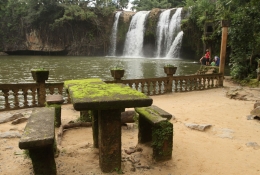 The waterfall at Paronella Park. 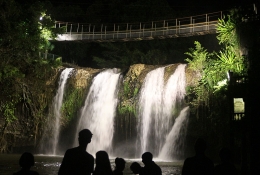 The waterfall at night. 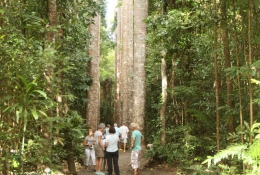 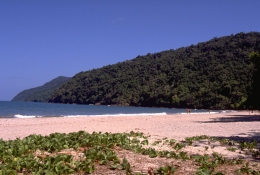 Etty Beach with the rainforest reaching down to the beach.