Ask the alternative lifestyle people who fled north from Sydney in the 1960s and 1970s and they'll tell you that Mullumbimby in the 21st century is like Byron Bay was when they first came to the area. "Mullum", as many of the locals call it, has excellent restaurants, a relaxed subtropical ambience, and a normality (it looks and behaves like a modest rural service centre) which is far removed from the overpopulated energy of Byron Bay or the self-conscious hippiedom of Nimbin. Like Goldlocks it is "just right" Not surprisingly, tourism is important to the local economy but the region is essentially agricultural and therefore is noted for its production of bananas, avocados, pineapples and other tropical fruit, dairy products, macadamia nuts, cattle, pigs and timber. It makes glorious, hippie sense that the main "tourist" attraction in the district is Crystal Castle. The ultimate expression of hippiedom the "castle" has a huge showroom of special crystals and sublime gardens where the visitor can meditate in the presence of the Buddha. Beyond the Crystal Castle, Mullumbimby is a place worth exploring with excellent subtropical bushwalks and a genuine ambience of peace and tranquility.

Mullumbimby is located on the Brunswick River 773 km north of Sydney via the Pacific Highway, 19 km north-west of Byron Bay and 156 km south of Brisbane via the Pacific Motorway.

Mullumbimby Museum
Located in the old Post Office (1907) on the corner of Stuart and Myocum Streets, this is the home of the Brunswick Valley Historical Society Museum. It is open on Friday  from 10.00 am - noon and on market days (3rd Saturday of each month) from 10.00 am - 1.00 pm. On its website it explains that it "seeks to collect and conserve material including objects, images and documents that record the social, economic and civic history of the Brunswick Valley... the Museum ... is located in Summers Park along with a Machinery shed, replica slab hut, collection of horse drawn farm implements, and equipment from the local railway, water supply and brick works". For more information check out http://www.mullumbimbymuseum.org.au.

Court House
The Mullumbimby Court House (1908) in Dalley Street was designed by Government Architect W.L. Vernon and is a simple country courthouse. It is next to the Police Station (also designed by Vernon) and along the road from the town's Civic Memorial Hall which dates from 1929.

Brunswick Valley Heritage Park
Located between Brunswick Terrace and the Brunswick River is the Brunswick Valley Heritage Park which has a pleasant walking track through a reserve where over 200 rainforest plants have been established and labelled. They include red cedars, coolamons, grevilleas, black apple, giant water gum, rosewood, flooded gum, swamp mahogany and hoop pines. It is an ideal way to identify many of the impressive trees that prosper in the local rainforests.

Mullum Festival
The Mullum Music Festival is one of Australia's great music festivals. It breaks all the rules. There are no high profile headline acts. There is a blissful ambience which permeates the whole of the town and, even though it is located on the far North Coast, there is no rain or mud. How? All the performances are inside at either the local Civic Hall, the high school assembly hall, the Ex-Services Club, the Bowling Club, the Drill Hall or the Courthouse. And there’s a Magic Bus which shuttles festivalgoers between venues. There is no hierarchy of performers, no sense of building to a crescendo. The result is an intimate, friendly unpretentious festival for those who love to dance to funky bands and enjoy gasping in wonder at little-known musicians most of whom have slipped below the radar of popularity. Feeling the warmth and friendliness it is disconcerting to realise that, in an age of crass commercialism, this is festival driven not by profit but by impeccable musical taste. The festival director, Glenn Wright, is a man prepared to gamble his own money on what he believes is good music. It is a festival where happy, uninhibited audiences listen to the very best of the alternative and roots music scenes.

Crystal Castle and Shambhala Gardens
Crystal Castle is a delightful way to spend a few hours soaking up the ambience of place famed for its crystals, its interesting cafe and its impressive statue of the Buddha. Located at 81 Monet Drive, turn left at the Post Office in Mullumbimby, it is only seven minutes drive from the town centre. As the website explains: "In 1986, Naren King was invited to a new years party at a magnificent unique building on 25 hectares near Mullumbimby. Eccentric architect, Edwin Kingsbury, had created a concept of 'harmonious architecture', a round central building with 4 radiating wings, no 90-degree angles, and magical reflecting ponds. All built where the ley lines, or earth’s energy lines, intersect ... Hence, 'The Castle', as the locals jokingly called it, began operating as a crystal business, accompanied by the raising of horses and chickens, and years of massive re-planting of the decimated land, which had been cleared for grazing and banana growing ... Crystalight was Australia’s first direct importer of quality natural crystals from around the world, supplying wholesale crystals from the hills of Mullumbimby. Local hippies got wind of something interesting going on and kept ‘dropping in’ to marvel at the crystals ... Naren has spent over 25 years travelling the world in search of extraordinary crystals. At one stage so much rose quartz was imported that it was used to line the pathways around the Castle, which saw the gardens begin to take shape. People loved spending time surrounded by such beauty and started hanging around; hence the Café was built to provide refreshments." Today the main building, which houses the Lotus Cafe, Crystal Gallery, Words of Wisdom Bookshop, Vibrasound Room, Body Temple and Wearable Arts Gallery lies at the centre of gardens where the visitor can walk past statues of the Buddha, Ganesh, Garuda, Vishnu and Lakshmi and explore the Rose Quartz Sacred Circle, Bamboo Avenue, Labyrinth and Rainforest Walk. It is open daily from 10.00 am to 5.00 pm, tel: (02) 6684 3111. Check out http://www.crystalcastle.com.au for more details.

Minyon Falls
Minyon Falls are located 21 km south west of Mullumbimby via Goonengerry and the Coolamon Scenic Drive. Minyon Falls Road passes the Minyon Grass Picnic Area. From the Picnic Area there is a 2 km walking track to the base of the falls or, alternatively, there is a picnic area and recreation site near the falls. The Minyon Falls are impressive. They tumble 97 m down sheer cliffs, formed by solidified lava, into the beautiful gorge below. They are part of the Minyon Falls Flora Reserve which has been exempted from all logging due to its high recreational, scenic and scientific value. A board in the picnic area indicates the whereabouts of a nearby walking-trail complex. The departure track, which takes in a lookout over Minyon Falls, follows the rim of the escarpment for about 2 km around to Quandong Falls. From this point you can return to the picnic area or continue on for another 2 km to the valley floor at the base of the falls. For more information check out http://www.nationalparks.nsw.gov.au/nightcap-national-park/minyon-falls-lookout/lookout.

* Prior to the arrival of Europeans the Bundjalung Aboriginal people lived in the area.

* The first European to explore the area was Captain Henry Rous in 1828. He named the Brunswick River after the wife of King George IV - Queen Caroline of Brunswick.

* A camp was established on the Brunswick River in 1850. The river was navigable to this point and it was here that bullock teams could ford the river.

* Cedar cutters exploited the trees along the riverbanks from the 1850s.

* The first school in the district opened in 1886.

* The North Coast railway reached the town in 1894.

* Mullumbimby acquired its own municipal government in 1908.

* A weir was built on Wilsons Creek in 1926. It supplied both the town's water supply and a hydro-electric power station which also serviced Bangalow and Byron Bay.

* By 1970 Mullumbimby had become an important alternative lifestyle centre.

There is a useful local website. Check out http://www.brunswickvalley.com.au/index.php?D=44 for deetails about accommodation and restaurants in the town. 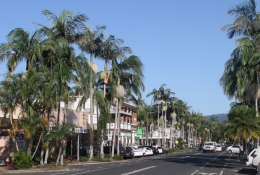 The palm-lined main street of Mullumbimby. 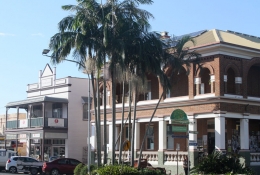 The Old Buttery and the Bank building in the main street. 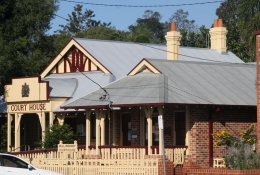 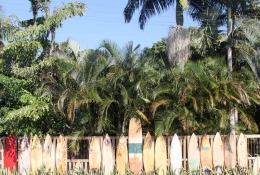 The fence of surfboards outside the Poinciana Cafe in Station Street. 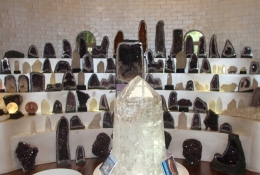 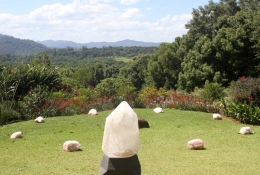 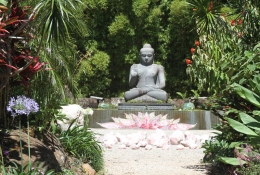 Buddha and the Lotus Pond at Crystal Castle. 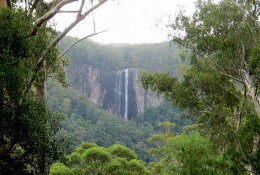