Rural service centre once known as the "Citrus Capital of Queensland".

The small rural service centre of Mundubbera is located on the Burnett River although it likes to think of itself as the "Meeting Place of the Waters" because both the Boyne and the Auburn Rivers flow into the Burnett 10 km west of the town. Historically Mundubbera claimed to be the Citrus Capital of Queensland. At the time the Mundubbera district produced over one third of Queensland's citrus fruit and claimed to have the largest single citrus orchard in the Southern Hemisphere.
Today the Mundubbera district has diversified with local orchardists producing mangoes,avocados, lychees, peaches, nectarines, watermelons, rockmelons and blueberries. It is now Queensland's largest producer of table grapes. The town's main attractions are the Bicentennial Park beside the Burnett River, the interesting Meeting Place of the Waters Mural and the local museum.

Mundubbera is located 361 km north-west of Brisbane via the Bruce and Burnett Highways. It is 124 m above sea-level.

There is some confusion about the Aboriginal meaning of the town's name. It is possible that it means "footstep" though it is also claimed that it refers to "the steps cut to climb trees". There is another theory which suggests that "mendi burra" were words used to describe the boundary between the lands of two local Aboriginal groupings or, possibly, the meeting place of the three rivers.

Bicentennial Park
The town's Bicentennial Park, located on the banks of the Burnett River at the southern end of Strathdee Street, is an ideal place for information (it is home to the Mundubbera Heritage and Visitor Information Centre) as well as being the start of the Arthur Dagg Walk which winds its way along the riverbank; having a stationary steam train; incorporating a tree grown from a seed gathered at Lone Pine on the Gallipoli peninsula; having a sensory garden which contains plants with distinctive scents; having a bush tucker garden; and having a collection of four metal and rock sculptures entitled "Ceratodus" (it is the lung fish (neoceratodus forsteri) which is indigenous to the Burnett and Mary Rivers. It is a living fossil which can both breathe underwater by means of gills and gulp air into a lung-like sac above water. It cannot, however, survive away from water for any extended period of time), "The Picker", "Cattleman" and "Footprints". The art works were all created in 2011 by Stainless Steel Sculptor and Public Artist, Chris Calcutt (see http://www.artisanseumundi.com/sculpture/chris-calcutt for more information). They represent the natural and human heritage in the Mundubbera district.

Mundubbera Museum
Located in Frank McCauley Street, near the local golf course, the museum's main building is the former Cattle Creek Valley School House (1916). It was opened in 1980 by James Archer of Gracemere, a direct descendant of the Archers who first explored and settled in the district.
Mundubbera Museum consists of eight historic buildings that have been moved to the site as well as two large machinery sheds and a citrus industry display building. Displays include local memorabilia, furniture, machinery and equipment. The museum is open 8.30 am to 10.30 am Tuesday, Friday, Saturday and Sunday or by appointment. Contact Denise: (07) 4165 4271; Beryl: 0427 654 025; Glenice: (07) 4165 3166 or Fred: 0427 654 238.

The Sad Story of the Big Mandarin
The Visitor Information brochures for Mundubbera no longer mention the Big Mandarin. It is now located in the grounds of the Citrus Country Caravan Village (previously known as the Big Mandarin Caravan Park) and is currently being used as the reception office for the caravan park. This was not always the way. In 1980 Graham and Elaine Mergard built the Citrus Country Village on Strathdee Street at the northern end of town. They decided that, in order to stop passing traffic, they would build a Big Mandarin - an appropriate symbol for a citrus growing area. The Big Mandarin was built by Neville Roger in ten sections in Brisbane. It was transported to Mundubbera in semi-trailers. Each panel was welded together on the site. The Queensland Minister for Tourism opened it officially on 23 May, 1983. It was nicknamed the "Enormous Ellendale" and was an immediate success with Graham Mergard reporting "We attracted coach loads of tourists who came up from Brisbane on a Friday morning and toured the town and orchards in the afternoon. We sold local produce such as mandarin marmalade and citrus honey."
When I first visited it in 1990 it was a major "Big" attraction with mini golf and citrus produce to keep the visitors happy. Today it sits quietly as the reception area for the Caravan Village. For more information tel: (07) 4165 4549.

Auburn River National Park
Located 51 km south-west of Mundubbera, the Auburn River National Park is a small (405 ha) reserve which attracts visitors eager to see the way the Auburn River has carved its way through the landscape. The passage of the river has left interesting geological formations including steep sided gorges, piles of salmon-coloured granite boulders and rock pools and cataracts, amidst countryside consisting mostly of open eucalypt forest (chiefly ironbark and forest red gum) and dry bottle-tree scrub. Along the river, leptospermum, callistemon and stunted fig are common. The park retains a few relics from the period in the late 19th century when it was the subject of a brief goldrush.
There are three walks from the camping area. See https://www.npsr.qld.gov.au/parks/auburn-river/pdf/auburn-river-map.pdf for a downloadable map.
1. Gorge Lookout Walk - 600 metres return - 15 minutes - leads to panoramic views across the Auburn River gorge. The lookout is unfenced.
2. Riverbed and Rockpools Walk - 1.5 km return - 1 hour - leads through eucalypt forest, dry scrub and creek vegetation to the river (look out for lizards sunning themselves on the river's rocks) and is defined as strenuous.
3. Gorge Top Walk - 3.2 km return - 90 minutes - a walk along the top of the gorge to the Auburn River Falls.
For more information check out https://www.npsr.qld.gov.au/parks/auburn-river.

* Prior to the arrival of Europeans the area was home to members of the Waka Waka Aboriginal language group.

* The Mundubbera area was first settled by Europeans in the late 1840s.

* In 1848 Mundubbera Station was established as a sheep grazing property and the following year the Archer brothers, who were to become some of the largest landholders in Central Queensland, moved into the area.

* The first Mundubbera village was proclaimed in 1863.

* Cattle largely replaced sheep as the major economic focus in the 1880s as the local speargrass had an adverse effect on the fleece.

* In the late 19th and early 20th century the land was resumed by the government and opened up for closer settlement.

* As a result the town came into existence in the years immediately preceding World War I - between 1906-1910.

* In 1908 the Binjour Plateau was settled by German families.

* In 1912 the town was proclaimed on its present site.

* The railway from Brisbane reached the town in 1914.

* A steam-driven butter factory was opened in 1916

* In 1933 that a local dairy farmer named Henry Zipf started growing citrus fruit on his property.

* By 1959 the council had established a Shire Library.

* By the 1980s the town was responsible for nearly all of Australia's mandarin exports.

* The town experienced a serious flood in 2010-2011 when the Burnett River broke its banks.

* In January, 2013 the town experienced a serious flood with 60 houses being inundated and serious damage to crops and livestock.

The University of Queensland has a detailed history of the town and the shire at http://queenslandplaces.com.au/mundubbera-and-mundubbera-shire. 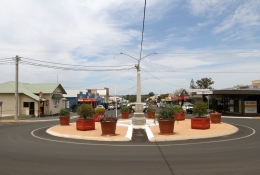 Looking down Lions Street - the main street - of Mundubbera. 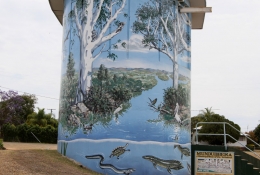 The 'Meeting Place of the Waters" mural. 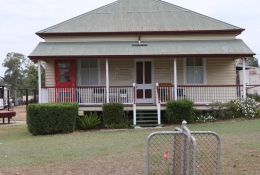 The Mundubbera Museum - once the Cattle Creek Valley School. 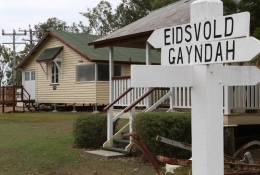 Historic buildings and signs at the Mundubbera Museum. 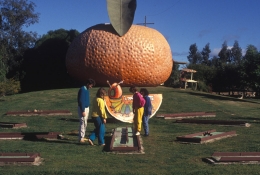 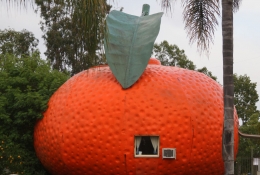